A Marine unit is scheduled to get the Navy Marine Expeditionary Ship Interdiction System by the end of fiscal 2023. 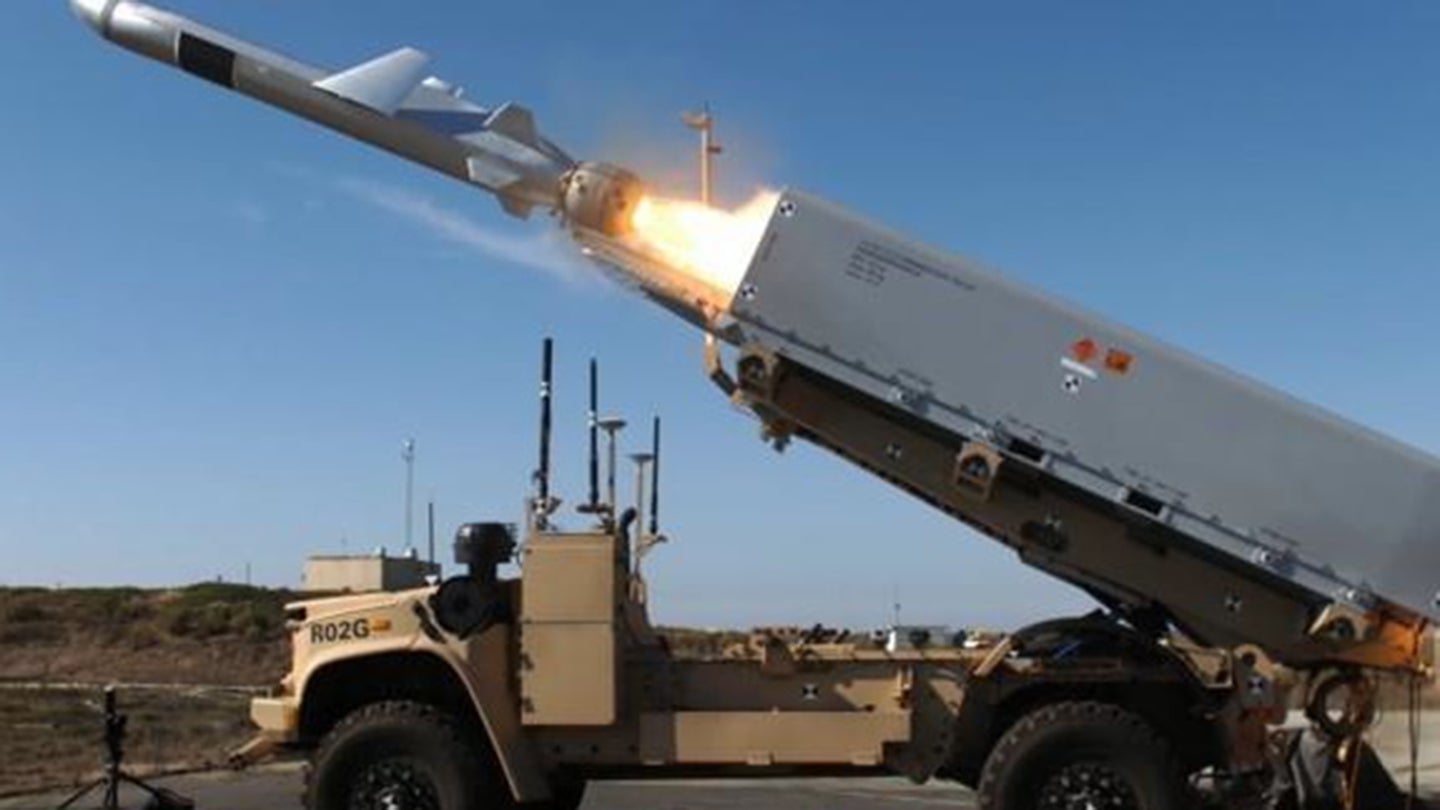 The Marine Littoral Regiments that the United States will establish on Okinawa and Guam in the coming years will be armed with the Navy Marine Expeditionary Ship Interdiction System, or NMESIS, which will allow the Marines to destroy enemy ships.

NMESIS is currently still being tested, but it is on schedule to be delivered to the 3rd Marine Littoral Regiment in Hawaii at the end of fiscal 2023, said Ashley M. Calingo, a spokeswoman for Marine Corps Systems Command.

Each Marine Littoral Regiment will be made up of roughly 2,000 Marines and sailors and include an anti-ship battery that uses NMESIS, which consists of Naval Strike Missiles, with a range of up to 115 miles, mounted on unmanned Joint Light Tactical Vehicles.

The vehicles are operated remotely for the protection of NMESIS crews, ensuring they will be separate from the launchers, which can be targeted by an enemy, said Joe McPherson, program manager for Long Range Fires at Marine Corps Systems Command, in a Sept. 2021 Marine Corps news release.

Over the past 20 to 30 years, America’s potential adversaries have invested heavily in weapons that are meant to destroy U.S. ships and aircraft, McPherson said in the news release. One of NMESIS’ advantages over other U.S. military weapons is that ground-based launchers have proven to be hard for enemies to find in past wars, he said.

“This is what NMESIS brings to the fight — a launcher that is survivable inside the enemy’s weapons engagement zone,” McPherson said.

The Marine Corps also plans to transfer the 4th Marine Regiment from Okinawa to Guam, where it is scheduled to be reorganized into the 4th Marine Littoral Regiment in 2027, the Washington Post reported.

If the United States needed to protect Japan from China’s navy, Marines from littoral regiments could deploy to remote islands in the Pacific, from where they could use NMESIS to attack Chinese ships, said Stacie Pettyjohn, director of the defense program at the Center for a New American Studies think tank in Washington, D.C.

Since the Naval Strike Missiles have a limited range, NMESIS would only be effective against Chinese ships that were close to Japan, Pettyjohn told Task & Purpose. If China invaded Taiwan, Marines armed with NMESIS would have to be physically on the island to sink any of the Chinese invasion ships.

Moreover, a recent wargame held by the Center for Strategic & International Studies think tank that looked at a Chinese invasion of Taiwan in 2026 found that Marine Littoral Regiments were only successful if they were already forward deployed to or close to Taiwan before the war began, said retired Marine Col. Mark Cancian.

The results of the wargame showed that a littoral regiment deployed to Taiwan could not be resupplied after the war began, Cancian said. The game also showed that Marine units on Okinawa that tried to move to Taiwan or expeditionary bases in the Pacific after hostilities commenced were consistently destroyed by Chinese forces.

The Marine Littoral Regiment concept is part of Marine Corps Commandant Gen. David Berger’s Force Design 2030 plan, which is meant to make the Corps lighter and expeditionary enough to win a war against China.

However, Berger’s plan has run into criticism from prominent retired Marine general officers, including retired Lt. Gen. Paul Van Riper, who completely upended the U.S. military’s assumptions about its adversaries in the 2002 Millennium Challenge wargame.

“This is Wake Island all over again,” said Van Riper, who referenced the famous World War II battle in which Marines were overwhelmed by a Japanese invasion.

First of all, the Marine Littoral Regiments are supposed to be transported to these islands on light amphibious warships, which are still in the design phase and already cost more than expected, Van Riper said. Those ships would only be able to move at roughly 15 knots, compared with Navy destroyers, which can top 30 knots, and they would be armed with just a 25mm or 30mm cannon and .50 caliber machine guns for self-defense.

Even if the Marines can put littoral regiments ashore, Chinese ships would still be able to sail more than 115 miles from those islands, putting them out of range of NMESIS.

“There are very few chokepoints in that expanse of water that aren’t vastly greater than that,” Van Riper said.

So, it remains to be seen whether Marine Littoral Regiments armed with NMESIS would be able to make a difference in a war against China, or if they would become obsolete as soon as the shooting started.