"Elvis has left the building." 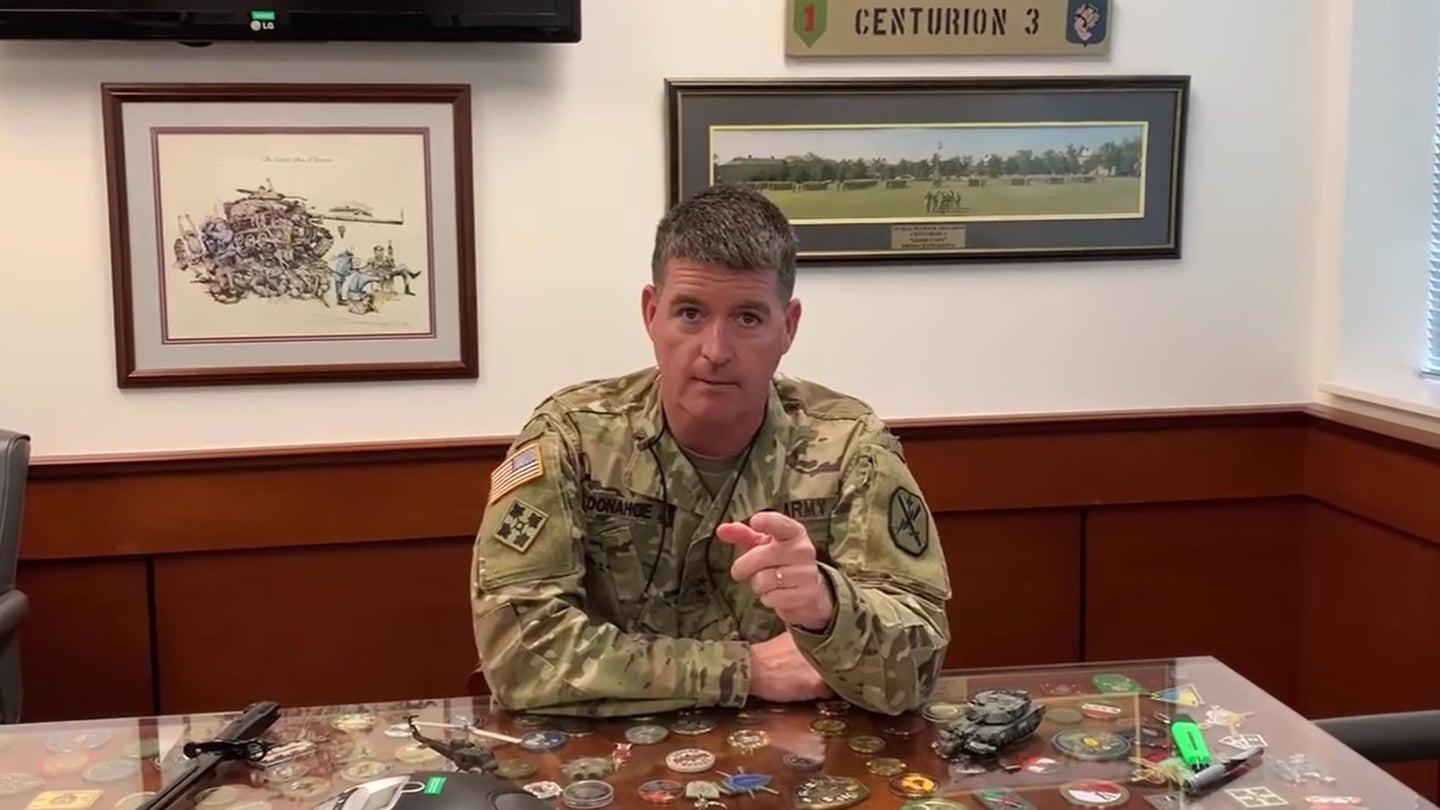 Army Maj. Gen. Patrick J. Donahoe retired in January 2023, months after an Army investigation found that he had created bad publicity for the service by defending female troops in response to a commentary from Tucker Carlson. (Army photo).
SHARE

Army Maj. Gen. Patrick Donahoe has retired honorably months after a service Inspector General investigation found that he had “brought a measurable amount of negative publicity to the Army” by standing up for women in the military on social media in response to commentary from Fox News personality Tucker Carlson.

Donahoe’s retirement had originally been scheduled for July, but it was delayed due to the investigation into his conduct on Twitter. It was initially unclear if he would be censured based on the investigation’s findings, but on Tuesday he told Military.com, “I retired honorably and without any reprimand or admonishment.”

Donahoe confirmed to Task & Purpose on Tuesday that he had retired on Jan. 1 without a reprimand. The former commander of the Maneuver Center of Excellence at Fort Benning, Georgia, has updated his Twitter profile to “Major General, US Army, Retired.”

On Sunday, Donahoe was widely congratulated for his retirement after he tweeted, “Elvis has left the building.”

Donahoe’s saga shows how the Army has struggled to demonstrate that it cares more about supporting female soldiers than getting criticized by cable news pundits and prominent lawmakers.

The controversy around Donahoe’s comments came shortly after President Joe Biden took office when Carlson claimed that the U.S. military was becoming “more feminine,” in part because the military branches were introducing new maternity uniforms from pregnant service members.

“Pregnant women are going to fight our wars,” Carlson argued in his March 9, 2021 broadcast. “It’s a mockery of the U.S. military. While China’s military becomes more masculine as it’s assembled the world’s largest Navy, our military needs to become, as Joe Biden says, more feminine — whatever feminine means any more, since men and women no longer exist.”

The following day, Donahoe shared a video on Twitter that showed him officiating the re-enlistment ceremony for a female staff sergeant, stating that the soldier is one of tens of thousands of women serving in the U.S. military and adding, “Just a reminder that @TuckerCarlson couldnt be more wrong.”

Carlson is an incredibly popular commentator among conservative Americans and his attacks on the U.S. military for allegedly going “woke” have been echoed several by Republicans in Congress, such as Sen. Ted Cruz from Texas.

On March 14, 2021, Cruz wrote a letter to Defense Secretary Lloyd Austin in which he accused Donahoe and other Army leaders who had rebutted Carlson’s claims of making partisan political statements prohibited under service regulations.

“This kind of behavior, while perhaps typical in a military-controlled Third World country, is completely unacceptable in the United States of America,” Cruz wrote.

The Army’s investigation into Donahoe’s conduct on Twitter found that he had “exhibited poor judgment” by getting into a Twitter exchange with Carlson.While his comments were “potentially admirable,” Donahoe also created so much bad publicity about the Army that the head of the service’s public affairs warned the Army secretary about the fallout, the investigation concluded.

Investigators also criticized Donahoe’s separate social media interaction with Marine veteran Josiah Lippincott, who responded to a tweet by Donahoe encouraging service members to get vaccinated for the novel coronavirus (COVID-19) by claiming that the number of troops dying by suicide showed that the Defense Department’s response to COVID-19 was more dangerous than the disease itself.

Donahoe countered that Lippincott was drawing a “false equivalency” between deaths from COVID-19 and service members who died by suicide. He later responded to another Lippincott tweet by tagging Hillsdale College, where Lippincott was attending to get his PhD., with the message: “Come get your boy.”

The spat with Lippincott, who was later removed from Twitter, earned Donahoe renewed criticism from Carlson and fellow Fox News personality Laura Ingraham.

“The media and public outcry demonstrated MG Donahoe had not thought about what he typed before he posted his tweets to Mr. Carlson, or Mr. Lippincott, nor had he given any consideration of the impacts given their larger audience of followers,” the Army investigation found. “The provisions for dignity and respect in AR 600-20 apply to ‘all people,’ ‘in all aspects of life.’”

And yet the Army’s top leadership seemed oblivious to the fact that by chastising Donahoe, the service appeared to be condoning attacks on women in uniform.

“Intentionally or not, this whole thing showed women that we are not worth defending,” an unnamed service member told Military.com in October. “If he can get slapped for this, why would anyone defend women in public?”

Army Secretary Christine Wormuth appeared to underscore this message when she said in October that general officers should avoid getting into political debates on Twitter.

“One of the things I think that’s most important to [Army Chief of Staff] Gen. [James] McConville and I is keeping the Army apolitical and keeping it out of the culture wars,” Wormuth said on Oct. 10.

Four days later, Wormuth attempted to clarify any “confusion” on the issue by tweeting that she expects Army leaders to defend female soldiers whenever they are attacked. She added: “Army leaders, use good judgment online. Keep it professional.”

UPDATE: This story was updated on Jan. 1 after Army retired Maj. Gen. Patrick Donahoe confirmed that he had retired without a reprimand.