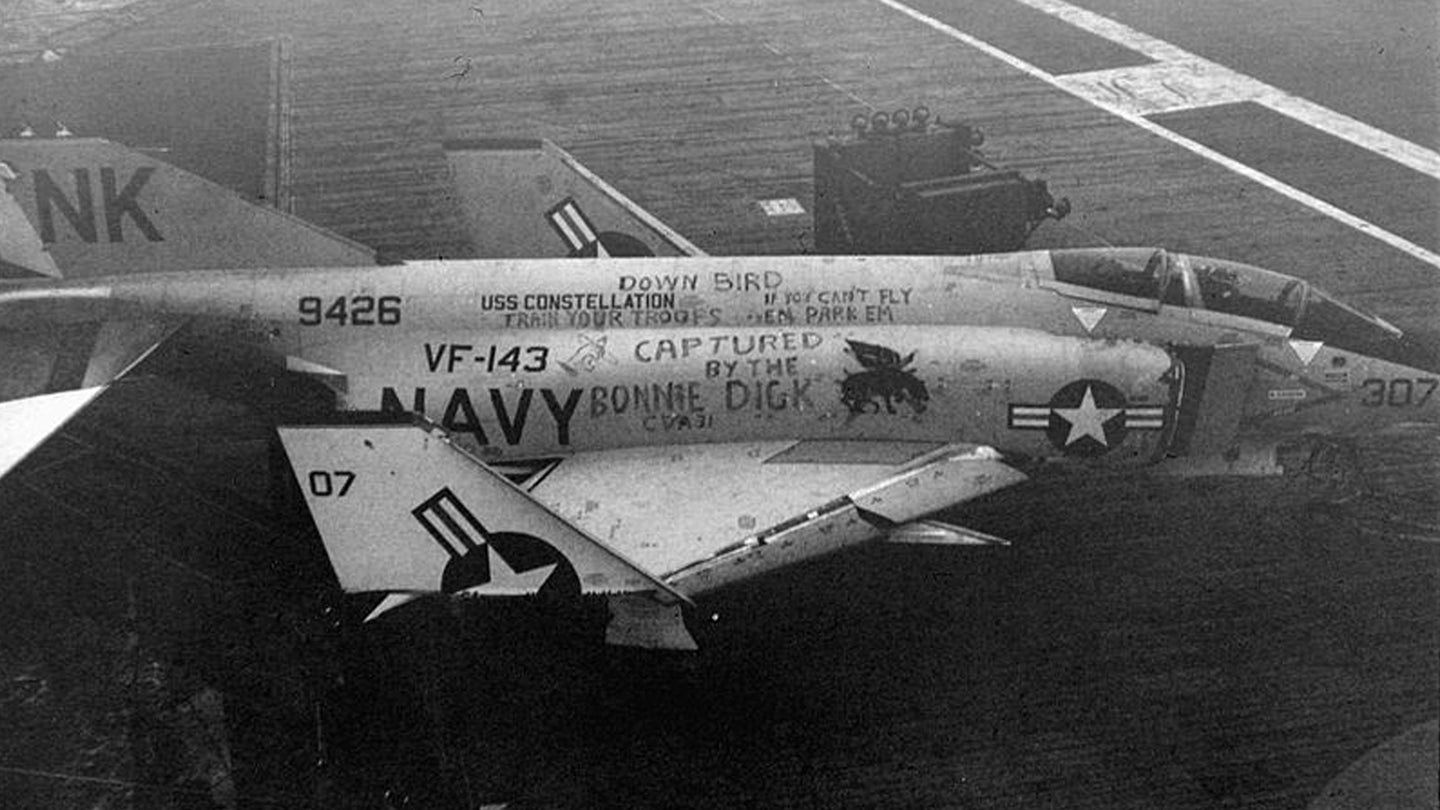 The U.S. military knows how to use good old-fashioned shame and physical exercise to teach service members valuable lessons, and the Navy aviation community is no different. An archival photo that surfaced recently on the popular Facebook page Air Force amn/nco/snco shows one lesson that sailors seemed to enjoy teaching their unfortunate colleagues: don’t land on the wrong aircraft carrier!

Though it looks like a bad photoshop job, this image is real. A 2018 tweet from the U.S. Naval Institute shows the same photo of a Navy F2H-2 Banshee fighter assigned to the aircraft carrier USS Coral Sea covered in graffiti after landing aboard the USS Wasp in 1952.

“Navy tradition holds that pilots who make a navigational error and land on the wrong carrier get mocked by the crew who ‘decorate’ the plane with graffiti,” the institute wrote in its tweet. “Adding ‘U.S. Air Force’ markings is the ultimate insult to an already embarrassed naval aviator.”

Misery loves company, and there are plenty of images on the internet of Navy aircraft that were similarly defaced over the years. A second photo tweeted by the U.S. Naval Institute shows an F9F-5 Panther covered in portajohn calligraphy for landing on the wrong ship. Plenty of similar images can be found on websites like The Aviation Geek Club, which features one photo of a Navy aviator grinning in front of a Banshee with the words “chief navigator” and “where am I?” scrawled across it.

“If you can’t fly ‘em, park ‘em,” wrote one sailor on the side of an F-4 Phantom II assigned to the USS Constellation that had the misfortune of landing on the USS Bon Homme Richard sometime between 1962 and 1964. These mementos can be considered part of a larger military aviation tradition called “zapping,” where aviators do their best to make their mark on any unit they happen to visit.

“These are slogans, badges, stickers etc. that other air forces, or RAF Squadrons, place on other units’ aircraft, in the spirit of rivalry and humor,” wrote Tim Bracey, a volunteer for the Royal Air Force Museum London, in a 2020 post on the tradition.

Some of these traditions date back more than 70 years. For example, Bracey described how RAF squadrons No. 617 and No. IX (9) both claim to have sunk the German battleship Tirpitz in November 1944, and the two units took turns stealing a bulkhead from the ship from after the war until 2002, when it was given to RAF Museum London. The museum also has a No. 617 Tornado fighter jet with a memo from IX sneakily scrawled in the main undercarriage claiming the Tirpitz kill.

“Most squadrons produced their own design of zap and they would be spread liberally around other units,” Bracey explained. “They are usually in undercarriage bays, on doors and other out-of-the-way places. In some cases, there is also graffiti, added by ground or flight crew.”

Aviators zap colleagues from other units, services and nations, the volunteer said, though the tradition “is less common these days, perhaps because we are less tolerant to what some members of the public might see as ‘litter.'”

The same goes for scrawling graffiti across Navy aircraft that land on the wrong carrier. Jeff Nolan, a former Navy helicopter pilot, told Task & Purpose that the tradition still stands, though advanced navigation technology means it is unlikely for aviators to land on the wrong deck these days.

“Also add in the fact that we rarely have two plus carriers in close proximity to each other for this mistake to happen,” he said. “I haven’t heard of one for years.”

“If for some reason this did happen there would be plenty of sharpies to go around,” Nolan said.