Military life summed up in one photo: The exhaustion, the futility, the police calling

A modern art masterpiece in MultiCam. 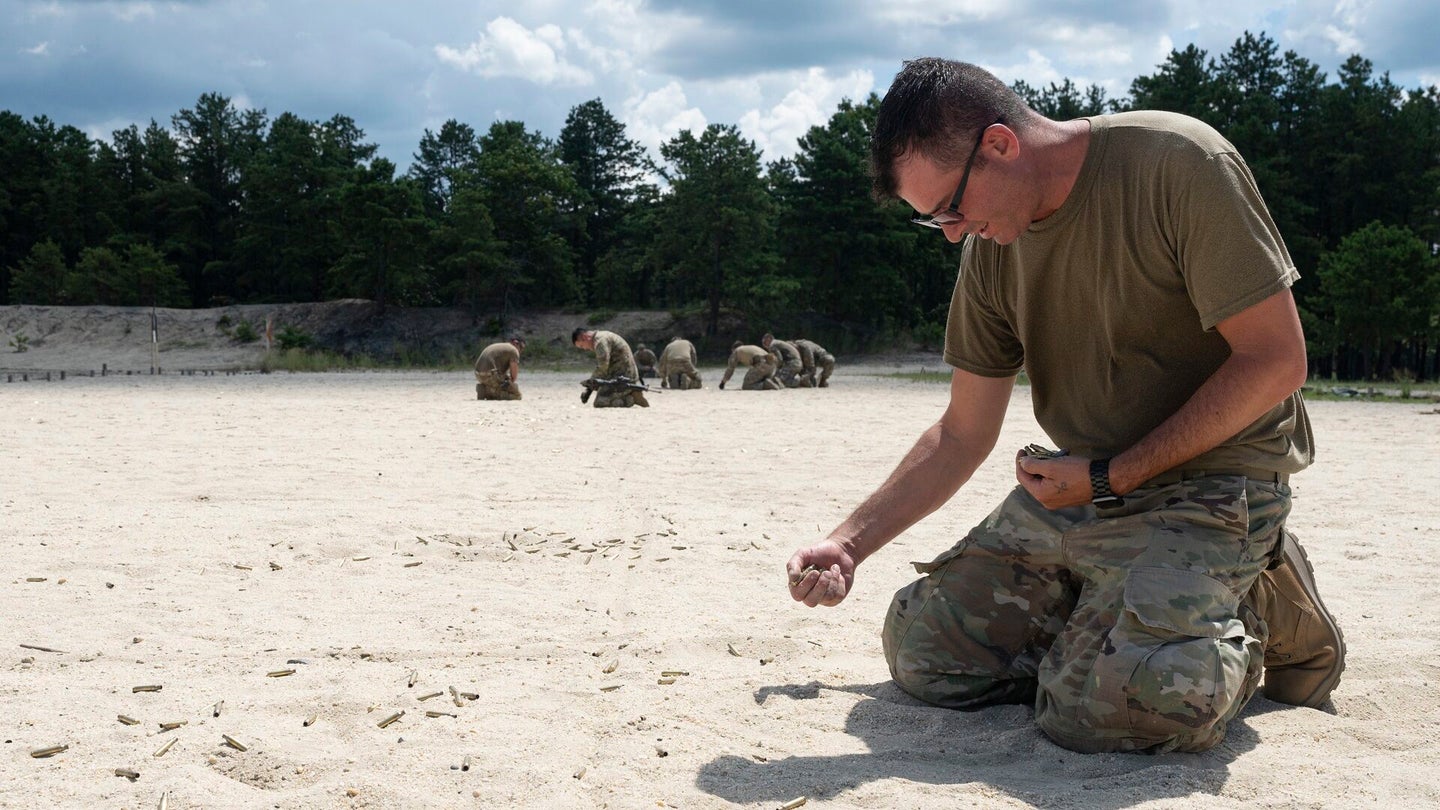 The term “military service” covers a lot of ground. It means swearing a solemn oath to defend your country and its values. It can mean serving overseas in combat, or at home during relief efforts in the wake of a disaster. There’s camaraderie and sacrifice, courage and fortitude, hardship and heartfelt joy. It also means doing the mundane, boring-as-shit jobs that just need to get done. You know, literal military “service.”

This recent image of a U.S. service member, taken by Air Force Staff Sgt. Jakle Carter, shows U.S. troops picking up spent shell casings after a day on the range. Commonly referred to as “police calling,” it’s a routine part of training, wherein service members form up in a line after they’re done shooting for the day and then walk forward, stooping down here and there, to painstakingly pick up every single spent casing they can find. It is a universal part of military life. If you’ve fired your weapon during training, then you’ve bent over to pick up your own brass afterward.

The service member in the photo, identified only as a “student,” appears to be an airman who was training at Joint Base McGuire-Dix-Lakehurst, New Jersey, on Aug. 8, 2022, where he took part in a pre-deployment training course that was overseen by the 421st Combat Training Squadron. Based on the fact that the 421st oversees pre-deployment training for some 5,000 airmen and other troops each year, as well as the other photos in the album showing troops wearing the Air Force’s signature camo ball caps, it stands to reason that the service member in the photo is in the Air Force.

But it’s the mood of the photo that catches the eye. There’s loneliness in that image, as this one service member sits apart from his peers, who appear clumped together in the distance. And there’s a sense of futility as well as he gathers up brass, piece by piece, clutching them in a free hand.

While his expression is one of slight exertion, it seems likely that if the right conditions were met, his demeanor might turn more joyful — say if the unit’s senior noncommissioned officer were to walk up and announce that after the brass was cleaned up, they could all go home for the day. But until that time, all he can do is toil in the blazing sun, picking up hot brass casings one by one from the equally hot sand.

Yet there’s also strength there, a sense of endurance in the face of the mundanity of everyday military service. The kind that’s on display among the rank and file who are forced to stand at the position of attention for hours on end at change of command ceremonies across the force. It’s etched across the faces of every soldier, sailor, airman, and Marine who’s ever been forced to participate in a unit-wide ‘fun run.’ An expression torn between a grimace and a smirk that says “Really? Again with this fucking shit?” And it’s there, too, on the service member’s face. (Though it’s entirely possible that his facial expression was because it was friggin’ hot outside and he couldn’t understand why someone would take a photo of people picking up brass.)

If this scene were a painting, done in the style of the realist painter Edward Hopper, it might look something like this:

As to the identity of this apparent airman, we don’t know, but in the grand scheme of things, it may not matter. He could be any one of us: Any U.S. service member who’s ever sat in the hot sun painstakingly gathering spent shell casings after a day on the range, or sweeping up a parking lot, or painting and rearranging rocks. He is the everyman, the eternal symbol of a working party. He is all of us, and we are him.