The best photos of the US military in 2019, according to an award-winning Air Force photographer

"You have to be ready to shoot at any time, always looking for the action, the emotion that tells some kind of a story" 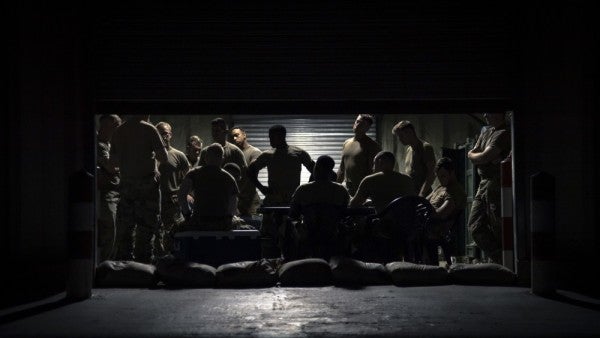 Tech Sgt. Chris Hibben had just stepped out of the shower at a base in Libreville, Gabon, when he saw a group of U.S. soldiers heading towards a meeting in a half-closed garage. It was well after dark, and the light shining down from the garage ceiling cast the soldiers’ bodies in sharp relief to one another.

Hibben dried off, grabbed his camera and shot a few frames, unaware that, a year later, one of the shots would help him win the prize of top military photographer of 2019.

“It was one of those things where you have to see the photo almost sometimes before it happens,” Hibben told Task & Purpose. “You have to be ready to shoot at any time, always looking for the action, the emotion that tells some kind of a story.”

Anytime, anywhere is Hibben’s modus operandi when it comes to photography. The airman has been shooting stills and video since he was in high school, and after initially joining the Navy in 1991, he now travels the world taking pictures for the Air Force’s 4th Combat Camera Squadron.

“I always had an interest in capturing that moment, being able to tell a story with a photo,” he said. “It’s kept me going through my life.”

Hibben is the winner of the second annual Military Visual Awards top photographer prize. MVA started in 2018, with the goal of producing “an extremely high level of productive and healthy competition amongst service members who take photographs,” according to the contest’s website.

This year, the contest also included videography and submissions from international military journalists and civilians. Here are Hibben’s favorite still photos that placed in the competition. As a rule, I made him choose three of his own to start out.

“You can pull 20 different stories out of that one photo.”

“We were forward deployed to Gabon and this was basically our first night there, just getting situated, getting information on how things were going to roll. Before this, they were probably joking around, but that one moment, everybody shut up and listened because they wanted to do a good job and be on the same page.

You can pull 20 different stories out of that one photo, though the one main story is that meeting. There’s a rawness to it, that door’s not totally open and it cuts off a couple guys’ heads, but it’s framed in a way that’s eye-catching and intriguing to the viewer.”

“You can tell all nine people were there for the same purpose.”

“One of the biggest things I say to photographers is to wait for the moment, capture the emotion. Here I waited for a moment where everybody was doing something: one guy was working on an engine, another was handing him a tool … you can tell all nine people were there for the same purpose: to get the engine moving again.”

“People are all the same, we all have phones.”

“When you travel you see a whole bunch of people, in horrible conditions and in great conditions. This was a day in the life of that lady, on her phone with her water next to her. And there’s an electric water heater so she’s probably making coffee or tea. And you can see the one eye, which I thought was cool. The colors of the door and the tapestries also stood out to me, like ‘man, I’d love to know her story.’”

“I never knew these things had that much kick to them.”

“I never knew these things had that much kick to them. That’s something you don’t always see. I feel like it’s probably photoshopped pretty well, but to see an exhaust coming out like that, I had no idea. I always saw smoke so it’s definitely an interesting shot. And Rachel definitely gave it a mood too.”

“This is one of those pictures that’s a great capture.”

“This is one of those pictures that’s a great capture. Everybody’s got their head shaved doing what they’re supposed to be doing, but then you zoom in and you see this girl who kind of has a smirk on her face, like 'Why am I here?’ And some other people are tired and their eyes are closed, and then one guy in the middle is looking up at the camera. It’s just interesting, you can go through each one and try to figure out what each person’s thinking and what’s going on there, so it definitely caught my eye.”

“Can you imagine being that person there?”

“I try to look at a photo and say ‘can you imagine being that person there?’ It just looks so cool, like ‘where is that guy going?’ I might be a little biased, since those are Charleston aircraft [where 4th Combat Camera is based]. But it’s also cool because the guy is dark and backlit with the C-17s behind him.”

“The whole thing about photography to me is the eyes.”

“It’s totally in focus, he’s got the eye, a lot of mud on the gun. He cropped it perfectly. To me, that shot’s like, ‘oh wait, what’s this?’ The whole thing about photography to me is the eyes. It’s just like when you’re talking to someone and you look them in the eye, you can see the emotion coming from it. Not all photos need an eye, but if you’re doing a story about someone, you’ve got to have the eye to get that emotion.”

“You can tell that person’s been through hell.”

“In this case you can just tell the strain on the face, you don’t need to see the eyes on this one. You can tell that person’s been through hell, that person’s been in the mud and the dirt. The interesting thing is there’s not a lot of dirt on the face. Maybe it wasn’t wet enough, or maybe he’s just careful.”

Hibben thanked the Military Visual Awards, which he says fills a hole in military photography competitions. Up until 2015, any military journalist could send a portfolio to compete in the DOD-run Military Photographer of the Year contest, even if those portfolios hadn’t won any accolades at the base, command or service levels. Now however, entries have to place in the top three at the lower levels to move up in the competition.

The rules were changed because the contest “had inconsistent procedures between the military branches and the logistics of running the contest had become too large,” Karen Nowowieski, chief of public affairs for Defense Media Activity (DMA), in a 2017 article for the National Press Photographers Association.

However, Hibben was disappointed by the rule change, saying that it prevents junior military journalists from competing with the best of them in a military-wide contest. MVA, which is run independent from the DoD, solves that problem, he said.

“You’re not going to push yourself unless you can compete against the best out there,” Hibben explained. “The nice thing about MVA is it’s open to everyone, so you’re able to get judged on a bigger scale than just your local peers … it gives the little photographers a chance to win.”

“MVA has no official affiliation with the DoD, however we respect the competition they run and encourage applicable U.S. service members to submit,” he added.