Why the hell are these Dutch sailors strolling through the desert in dress whites?

The lieutenant may be lost again. 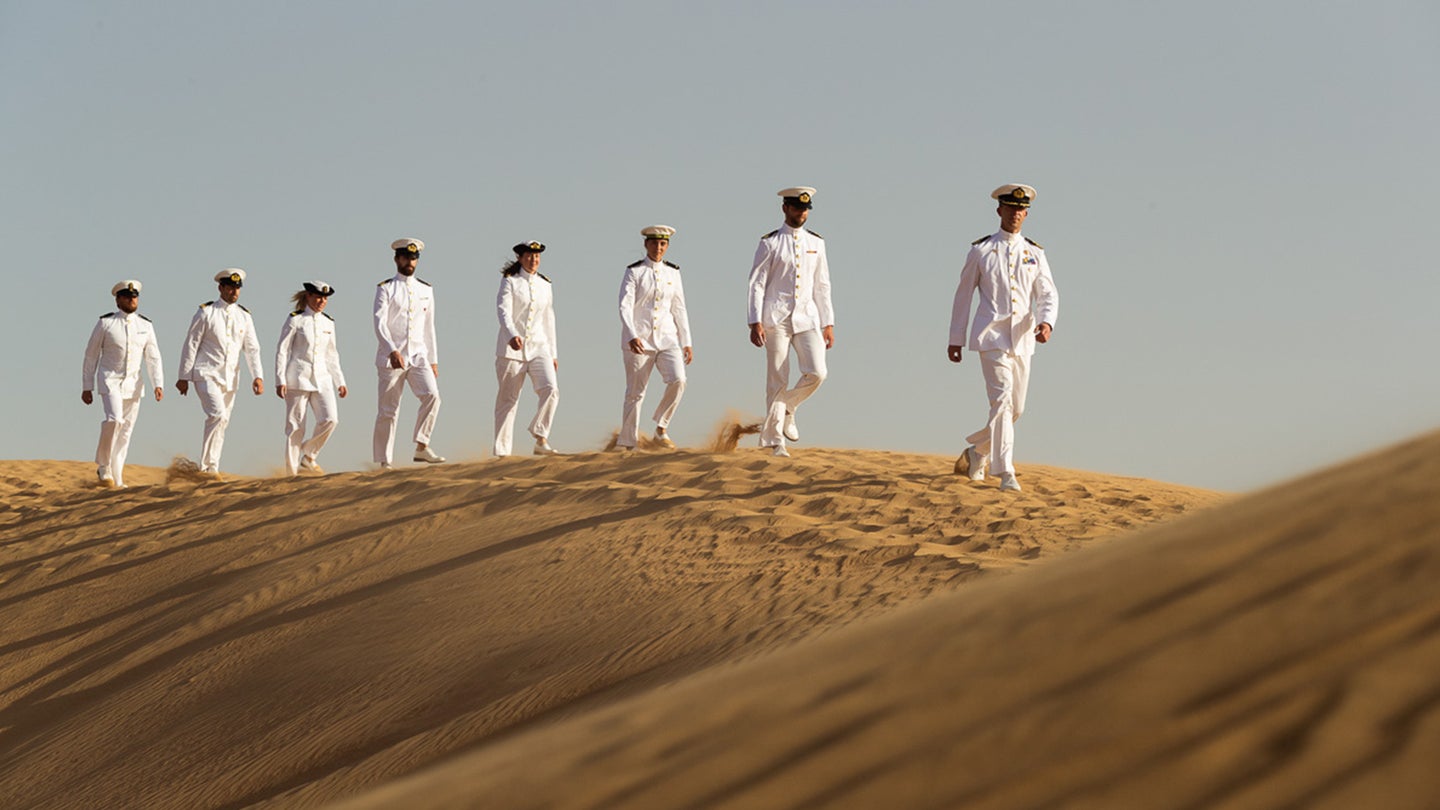 The commander of Zr. Ms. De Ruyter and some of his crew walking in the desert of Dubai during their harbour visit during EMASOH mission during the beginning of the year for promotion purposes 11, March 2020. (Aaron Zwaal / Military Visual Awards).
SHARE

“Eight sailors walk into the desert” sounds like the start of a joke, only it’s not a joke, it’s a photograph that won first place prize for feature photo at the 2020 Military Visual Awards. The photo, taken by Dutch photographer Aaron Zwaal, shows the commander of the Royal Netherlands Navy frigate HNLMS De Ruyter (Zr. Ms. De Ruyter, in Dutch), walking in the desert of Dubai during their harbor visit during the European Maritime Awareness in the Strait of Hormuz, on March 11, 2020.

It’s a great photo, and hats-off to Zwaal for capturing the scene and framing it so well. I think part of the fun is trying to figure out what’s going on here. The caption on the MVA website says the photo was taken “for promotion purposes,” though it’s hard for my small reporter brain to figure out what they may have been promoting. Join the Dutch Navy, where you can walk through the desert in formal dress? Doesn’t sound fun to me, but maybe it’s a cultural thing. They do look dapper, that’s for sure.

Zwaal’s photo was one of many stunning captures that MVA selected for its best-of-2020 lineup. Now in its third edition, MVA began in 2018 with the goal of producing “an extremely high level of productive and healthy competition amongst service members who take photographs,” according to the contest’s website. And they definitely achieved that: the winners this year are the best of more than 2,000 photos submitted by military photographers around the world. Of that wide field, Marine Corps Sgt. Dana Beesley was chosen as 2020 MVA Photographer of the Year.

Part of what makes Beesley’s achievement even more impressive is the wide range of international submissions this year. Though the 2019 edition also included a few international entries, the 2020 contest seemed to really ramp up the scale with winning images from the United Kingdom, Sweden and The Netherlands. The contest also included a special category for images related to the coronavirus pandemic; and a new category called “hardware” where aircraft, tanks, guns or other gear are the subject of the image rather than people. Those new categories exist alongside MVA’s usual complement of news, feature, portrait, pictorial, illustrative, combat, and picture story categories.

The cool thing about MVA is that it fills a niche for military photographers near and far to measure each other up. Up until 2015, any U.S. military journalist could send a portfolio to compete in the DoD-run Military Photographer of the Year contest, even if those portfolios hadn’t won any accolades at the base, command or service levels. Now however, entries have to place in the top three at the lower levels to move up in the competition.

The rules were changed because the contest “had inconsistent procedures between the military branches and the logistics of running the contest had become too large,” said Karen Nowowieski, chief of public affairs for Defense Media Activity (DMA), in a 2017 article for the National Press Photographers Association.

Last year’s MVA winner, an Air Force photographer, said he was disappointed by the rule change, saying that it prevents junior military journalists from competing with the best of them in a military-wide contest. MVA, which is run independent from the DoD, solves that problem, he said.

“You’re not going to push yourself unless you can compete against the best out there,” Tech Sgt. Chris Hibben told Task & Purpose last year. “The nice thing about MVA is it’s open to everyone, so you’re able to get judged on a bigger scale than just your local peers … it gives the little photographers a chance to win.”

“MVA has no official affiliation with the DoD, however we respect the competition they run and encourage applicable U.S. service members to submit,” Jensen Stidham, an Air Force photographer who co-founded MVA, told Task & Purpose last year.

In the meantime though, we still need funny captions for this “sailors walking in a desert” photo, and that’s where you come in! What’s the best caption for these sand sailors? Tell us in the comments below.

Featured image: The commander of Zr. Ms. De Ruyter and some of his crew walking in the desert of Dubai during their harbour visit during EMASOH mission during the beginning of the year for promotion purposes 11, March 2020. (Aaron Zwaal / Military Visual Awards)