I Sought A Peaceful Poop In The Kuwaiti Desert. Then The Convoys Arrived

We’re celebrating “Turdsay” by dropping the “turd” entrance in our combat pooping contest. If you have something you think is as... 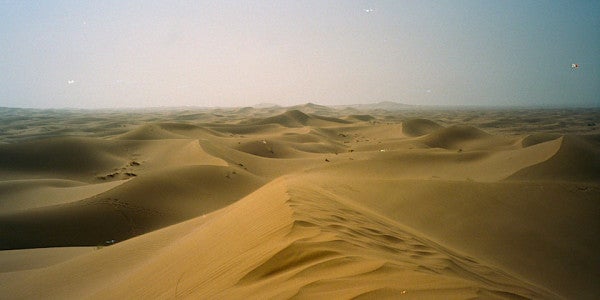 We’re celebrating “Turdsay” by dropping the “turd” entrance in our combat pooping contest. If you have something you think is as good, please e-mail it to Tom Ricks

After our little four-day jaunt into southern Iraq during Operation Desert Shield/OperationDesert Storm, my unit, the 3rd Armored Cavalry Regiment was one of the first to be pulled back and sent home. We spent a few days in Camp Cactus just south of the Iraq border doing some repair and refit before putting our tracks on lowboys for the convoy to the port of Jebel. My unit was laagered up outside of the wire of Camp Cactus.

It was the night when I had the sudden and urgent urge to poop. Inside the wire of Camp Cactus were magnificently constructed altars to the poop gods with privacy, real toilet seats, and copious amounts of toilet paper lovingly maintained by our units support personnel. Unfortunately, a visit to those poop palaces would involve a Humvee ride in the dark to the gate to avoid the wire obstacles that surrounded the camp. I had little faith in my ability to navigate the stygian landscape filled with wire obstacles and frankly, I did not have the time.

Instead, I grabbed my e-tool, my trusty and well used squat box, a couple of chem lights and headed off into the desert, counting on the dark to grant the privacy I desired to poop in peace. I picked a spot, dug a hole, placed my squat box (a well-used ammo box with the middle slat removed), and settled down for a nice long gratifying shit. I cracked open a couple of chem lights and hung them from my LBE to mark my position in case there was anyone driving around in the night.

In the distance, I saw a string of lights coming toward me. They kept getting bigger and bigger and were heading directly toward me. I soon realized that the lights were a convoy of vehicles moving south. They passed maybe 20 feet from where I sat mid-poop. My privacy vanished in the glare of multiple headlights as a convoy of mixed tracks and then wheeled vehicles drove by. I do not know what they thought seeing me in the middle of the desert caught in flagrante delicto with my pants around my ankles. Several of the track commanders waved to me as they passed. I waved back.

When the convoy was by me I looked up and saw another string of lights in the distance. The same scene repeated itself. Apparently, the private poop place that I had selected was just a few feet from the MSR (Main Supply Route) that units were using as they pulled out of Iraq.

Though being spotlighted while pooping was embarrassing what was worse was the dust and sand kicked up by the passing vehicles. I was covered in it. It got into ALL of my crevasses. I have heard people compare tough situations being likened to ‘wiping one’s ass with sandpaper’. Since that fateful night, that phrase has a … special … meaning to me. All in all, It was a shitty end to a shitty experience.

“WPM” deployed to Desert Shield/Desert Storm fresh out of Officer Basic Course and joined the 3rd ACR, where he spent 4 years as a Field Artillery officer. (God loves the Field Artillery! As an example of God’s love, the first record of a Fire Support Officer is in the Bible, in which the prophet Elijah on three occasions called down fire on his enemies. 1 Kings 18:38 and 2 Kings 1:12-14.) He left the active Army in 1994 and was in the National Guard from 1996 to 2006. He is now a veteran service officer with the Oklahoma Department of Veteran Affair, where he helps the veterans of Oklahoma secure the VA benefits that they have earned.