My story started the way many do, with sparkly attraction that morphed into friendship, then love. Unfortunately, my story also... 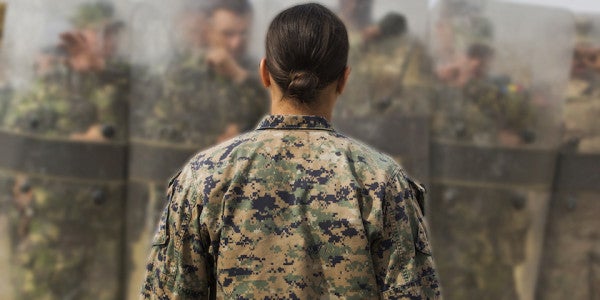 My story started the way many do, with sparkly attraction that morphed into friendship, then love. Unfortunately, my story also ended the way too many do, with holes in the walls, broken doors, and police knocking at the front door.

I met Kyle (not his real name) by accident — he smiled at me, and he had a smile that seemed to light up the room. I remember that being my first impression — a wide smile and lots of very white teeth.

We were both Marine officers, which meant he understood my work world. We worked hard and played even harder, which was all perfectly normal in the Marine Corps. To us, epic nights out often meant heavy drinking and keeping late hours at bars.

Artwork created by families participating in the art exhibit “A Window Between Worlds” is displayed at the Desert Sanctuary courtyard during their open house event held in Barstow, Calif., Oct. 5.Laurie Pearson

Soon after we started dating, Kyle was packing bags to head overseas again, and we had to make quick decisions about what we were to one another. Moving in together, getting married, and spending as much time together as the Marine Corps allowed wove the tapestry of our early relationship, and we were at once both wild and wildly happy. We were close, and that closeness allowed me to ignore certain things.

Related: How The Military Failed This Victim Of Domestic Violence »

First came the red flags that I ignored because I had all the same problems. Kyle drank in binge fashion, early and often. He was reckless and took risks at any opportunity, always up for some untried, new experience. Most of the time, I was right there with him.

Then there were the flags that I somehow chose to ignore and excuse because I was blindly smitten. Kyle would mix prescription pain medication with alcohol, or go out late and head to work without sleeping at all.

I stayed very good at keeping up appearances. When one of his angry outbursts left a foot-sized hole in our wall, I moved furniture and arranged pictures to cover the damage. When family and friends came to visit, I had clever explanations for why the doors in our house were off the hinges. Loud yelling became shoves into walls or furniture. Drinking became constant and darker.

Our fashionable apartment and put-together life started coming apart, and my self-denial got harder to keep up. One sunny afternoon, he dragged me across the living room floor by my hair and threw me out the front door. I remember being glad that our industrial-style concrete floors were smooth and polished — at least I slid easily.

The neighbors who called the police never asked me any questions, and I never offered them anything but averted eyes. I couldn’t tell anyone about it, even as forgiving and forgetting each incident was getting harder and harder to do. I was all alone at this point by choice.

I’m a freaking Amazon. These things don’t happen in my world, I thought to myself.

I’m an academic now, and I can intellectualize the heck out of how things happened the way they did. I can tell you all about how one’s surrounding social norms play a vital role in shaping the attitudes and beliefs commonly used to delineate and define culture, and my culture was one of independence and infallibility. Only the weak had problems, and my husband and I couldn’t be weak.

I was afraid in my own home, but I would never have labeled myself a victim of anything. I had no idea yet that I needed help, and wouldn’t have known how to accept it if someone had offered.

I wasn’t rare or special in my attitude — women in the military are particularly vulnerable to abuse due to geographical isolation from family and friends, and the potential for social isolation within military culture in general. Evidence shows that violence against women is a pervasive problem within the military-connected community, and it is an extremely relevant issue for active-duty servicewomen. Among the branches, the Army consistently has shown the highest rates of domestic violence, followed by the Marines, Navy, and Air Force. In one study of active-duty military women, 21% of the women surveyed reported being on the receiving end of domestic violence incidents. VA studies show even higher reported numbers of 36.6%.

It wasn’t until one of Kyle’s particularly scary benders left me alone in our apartment, searching for places to hide our ammunition that I realized something had to change. He was mixing alcohol with Valium at the time, and I could barely understand his speech. He had become paranoid, obsessively checking my whereabouts, phone records, and e-mail inbox.

I had no idea where he had gone that night, but I knew he always came back drunk. I searched for places to secret away rounds so that even if he went for one of our weapons when he came home, he wouldn’t have anything to fire them with. I knew he needed help, and a tiny doubt began to creep into my mind about whether I was ever going to be able to get him to seek it before something bad happened to me.

Participants were given the chance to write messages as supporters or survivors of rape or abuse on pieces that will be stitched onto the Monument Quilt during National Night Out August 2, 2016 at Fort George G. Meade, Md.U.S. Air Force photo by Staff Sgt. Alexandre Montes

It was the first time I considered leaving, knowing I might be leaving him drowning. Without even really knowing if I wanted to, I filed divorce papers and packed the car. I left everything material I owned at our former home with him and drove off, a completely broken version of myself.

Still not talking to anyone.

Still not naming the problem.

With geography and marital dissolution papers between us, it still took a me a long time to think back on things with enough clarity to learn a few things. Some volunteer work with a veterans’ service organization brought me into contact with shoulders I felt like I could lean on. When I finally did share it with one sister veteran, and then another, I heard this kindest of phrases: “Me, too.”

At the time, it was such a wonderful feeling to hear that absolutely nothing about my experience was rare or special. Now I worry that we’re not speaking about this within our community as the widespread problem it actually is.

Let’s talk about it now.