Good cops don’t wage war on the populations they’re charged with serving. Good cops know better than to do dumb... 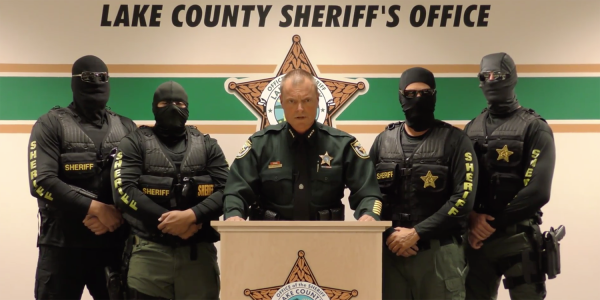 Good cops don’t wage war on the populations they’re charged with serving. Good cops know better than to do dumb stuff like put Punisher decals on their cruisers. Good cops also probably would look at a video like this one that Lake County, Florida Sheriff’s “Community Engagement Unit” made over the weekend and say, “You know what? That’s a pretty dark vibe. Let’s try a different approach”:

Flanked by four deputies who look like they just came out of a fetish party to look for El Chapo, Sheriff Peyton C. Grinnell engages the community like it’s a hot LZ:

Over the last month or so, I’ve had several phone calls from citizens in this county, concerned about the number of overdoses related to heroin. I want our citizens to know that I am aware of this serious issue. I am asking our residents to please call and let us know if you know of a location that this poison is being pushed out to our streets. You can remain anonymous.

Um, yeah. Lemme just ring you guys up to come down to my street. What could go wrong?

To the dealers that are pushing this poison: I have a message for you. We’re coming for you. As a matter of fact, our undercover agents have already bought heroin from many of you. We are simply awaiting the arrest warrants to be finalized. So, to the dealers I say, enjoy looking over your shoulder constantly wondering if today is the day we come for you. Enjoy trying to sleep tonight wondering if tonight’s the night our SWAT team blows your front door off the hinges. We are coming for you. If our agents can show the nexus between you the pusher of poison and the person that overdoses and dies, we will charge you with murder. We are coming for you. Run.

And after completing his dramatic soliloquy to strike of fear in the hearts of drug dealers all over Tavares, Grinnell and his quartet of DIY Deadpool cosplayers shuffle awkwardly off to stage right, no doubt to fight some crimes.

Clearly, more balaclavas and Oakleys in community engagement videos will do the trick. America is now on the DARE program’s darkest timeline.

Idea for @LCSOAlerts: don't spell like a dope if you're trying to stop dope. (hint: it's not spelled "ANNOYMOUS") pic.twitter.com/0IsalcYRUM