At least 10 people were killed and as many as 50 were wounded Monday, after two explosions rocked the St. Petersburg,... 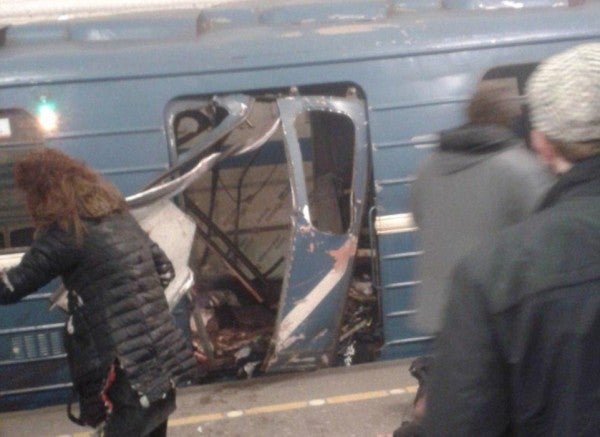 At least 10 people were killed and as many as 50 were wounded Monday, after two explosions rocked the St. Petersburg, Russia, subway, Fox News reports. The explosions occurred in two subway cars that were traveling between different stations. Authorities across the country have reportedly moved to secure subway services in major cities.

Shortly after the explosions, images and videos on social media showed injured people on the floor or fleeing the Sennaya Square metro station. In one video clip, a train door appears badly mangled from the explosion. Witnesses told Reuters that passengers were seen “hammering at the windows of one closed carriage,” desperate to escape.

“People were bleeding, their hair burned,” a witness told Russian media, per Fox News. “My girlfriend was in the next car that exploded. She said that he began to shake. When she came out, she saw that people were mutilated.”

According to the Associated Press, the subway has been evacuated and closed. The Independent reported that eight ambulances had arrived on scene near the Sennaya Square metro station. One of the blasts appeared to come from a device filled with shrapnel, Sky News reported.

Russian President Vladimir Putin, who was visiting the city today and spoke with the president of Belarus, Alexander Lukashenko, offered his condolences to the families of the victims.

“The causes are not clear, it's too early. We will look at all possible causes, terrorism as well as common crime,” Putin said, according to Fox News.

The motive behind the attack is still unknown, and no individual or group has claimed responsibility yet. According to the Associated Press, Russia's anti-terrorism committee says it found and deactived another bomb at a different subway station.

Russia has suffered horrifying incidents of mass violence like this in the past, reports MSN. In 2010, 38 people were killed when two female suicide bombers detonated bombs in on crowded trains in Moscow. In 2004, more than 300 people were killed — half of them children — when police stormed a Russian school in an attempt to end a hostage situation. 120 hostages died in a Moscow theater in 2002 after police stormed the building to attack the captors.

You can watch a live stream from the scene courtesy of Rudaw below:

This post will be updated as new information becomes available.