This Russian Gun-Slinging Robot Is Definitely Not A Terminator, Russia Insists

Meet FEDOR. He’s a humanoid robot from Russia that can screw in lightbulbs, drive a car, fire two handguns at... 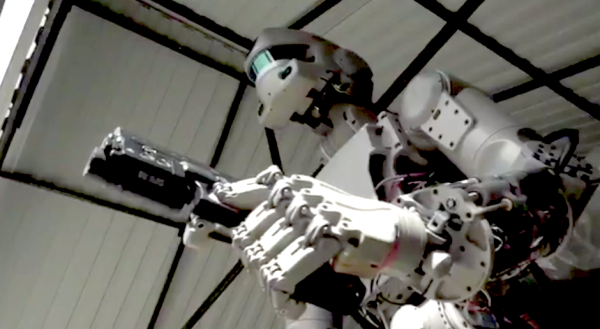 Meet FEDOR. He’s a humanoid robot from Russia that can screw in lightbulbs, drive a car, fire two handguns at once. But he’s absolutely *not* a Terminator — at least, according to Russian officials.

FEDOR, actually an acronym for Final Experimental Demonstration Object Research, is a bipedal robot originally developed by Android Technics and the Advanced Research Fund to take on search and rescue missions. But thanks to his extreme versatility and durability the Russian government reportedly plans to send him to space. FEDOR will likely become the sole passenger on Russian spacecraft Federatsiya, set to launch in 2021, or he serve on the country’s moon missions slated for 2031.

So why teach him to shoot guns? His creators say practicing marksmanship helps FEDOR develop his decision-making and motor skills, according to Independent. Although themilitaryapplicationsareclear,Russian deputy Prime Minister Dmitry RogozinevensharedashortvideoofFEDORinactionlastweek.

“Decision-making and motor skills’ sure sounds a lot like “robot murder skills” to us, but FEDOR’s makers and the Russian government insist that this skeletal robot was in no way inspired by the ghoulish genocidal robots of the “Terminator” franchise.

“We are not creating a Terminator, but artificial intelligence that will be of great practical significance in various fields,” Rogozin explained in a tweet.

We’ll see about that.