Russia may be weak when it comes to economic growth and national population growth, but the country’s still armed to... 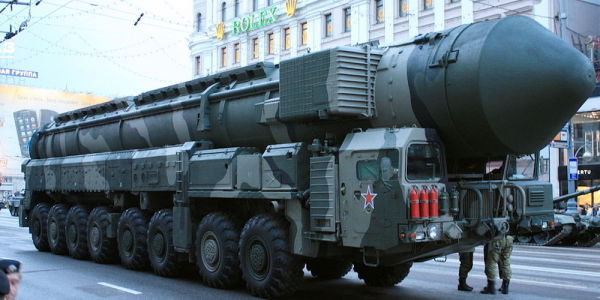 Russia may be weak when it comes to economic growth and national population growth, but the country’s still armed to the teeth when it comes to rocket power. According to the Center for Strategic International Studies’ Missile Defense Project, Moscow exercises control over the largest arsenal of short and long-range missiles in the world, from tactical rockets for regional warfare to intercontinental ballistic missiles.

If you ever need to remind someone of that when you’re downrange or, say, at a cocktail party, CSIS has a handy chart detailing Russia’s land-based missile ranges:

In the foreground, CSIS details the range of Russian tactical rockets deployed around Kaliningrad, while the background chart is a stunning reminder that Moscow’s SS-19 Stiletto and SS-18 Satan can still reach almost anywhere on the planet. CSIS also put together a guide to the various missiles in Russia’s arsenal, from the short-range SS-21 Scarab to the intercontinental Satan and SS-X-30 Satan II.

Why does this matter? The War Zone notes the inclusion of the SSC-8 cruise missile, which Russia tested in February in violation of a 1987 accord with the United States that banned the deployment of land-based intermediate-range missiles. From theNew York Times:

Administration officials said the Russians now have two battalions of the prohibited cruise missile. One is still located at Russia’s missile test site at Kapustin Yar in southern Russia near Volgograd. The other was shifted in December from that test site to an operational base elsewhere in the country, according to a senior official who did not provide further details and requested anonymity to discuss recent intelligence reports about the missile.

American officials had called the cruise missile the SSC-X-8. But the “X” has been removed from intelligence reports, indicating that American intelligence officials consider the missile to be operational and no longer a system in development.

“CSIS estimates the cruise missile's range at 1,242 miles, allowing it to reach into all of Alaska, the entire Persian Gulf, parts of France and parts of the UK,” the War Zones notes. “Just yesterday, the head of US Strategic Command stated that ‘we have no defense for it, especially in defense of our European allies.’” Oh, good. This is fine. Everything is fine.