Because everyone knows ICBMs are a bop. 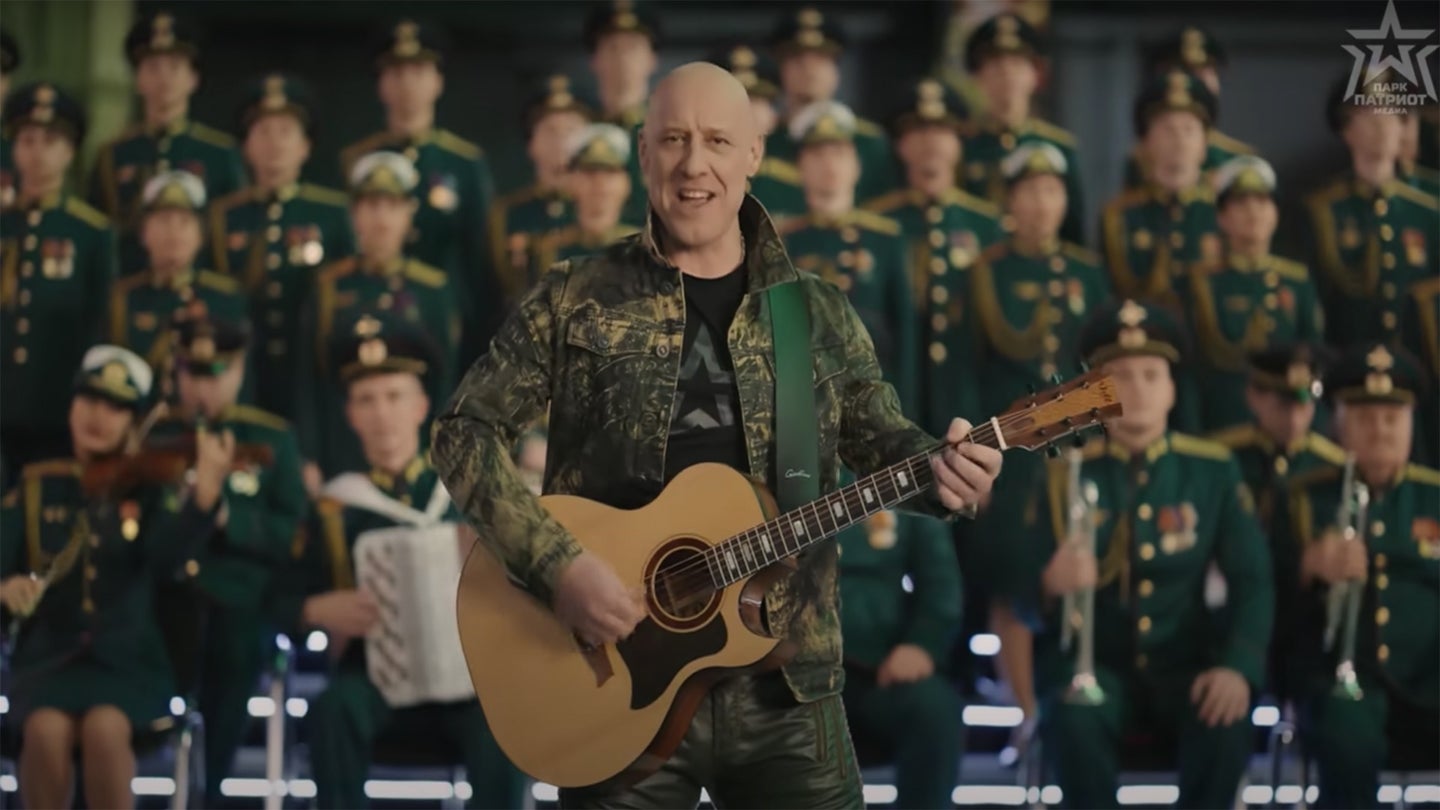 There’s a new Russian anthem for the war in Ukraine, and it is almost certainly not a banger.

The new song is called “Sarmatushka” — a tribute to the RS-28 Sarmat intercontinental ballistic missile —  and it debuted on Dec. 17 as part of the country’s Strategic Missile Forces Day, a celebration of its nuclear arsenal.

Performed by Russian singer Denis Maidanov, an accompanying music video was released by ParkPatriot.media, a propaganda arm of the Russian Ministry of Defense.

The lyrics are pretty explicit about where those Sarmat ICBMs will be pointed, too.

“From Mother Russia Sarmats are staring into the distance/at the United States,” goes the chorus, according to a translation from Euromaidan Press, a Ukrainian news outlet.

The video features Maidanov, accompanied by a military band, strumming a guitar in front of an array of other ICBMS. In between are shots of the Russian military testing the Sarmat, including the missile traveling on a mobile transport through the snow and being lowered into a silo.

Amid some overhead shots of the countryside, Maidanov sings of the Sarmat: “Its will is stronger than the Ural Mountains/It’ll scatter our enemies to dust in an instant/It’s ready to carry out the sentence/The US’s air defense is no hindrance to it/It’s not scared of sanctions/For the Sarmat there’s only pleasure/To disturb NATO’s dreams.”

This is clearly a slightly different tone here from what you might hear at the Eurovision song contest.

Towards the end of the video, Maidanov – now in uniform himself – watches a clip of a speech from Russian President Vladimir Putin, given in March 2022, in which the Russian leader mused that, “We have a legitimate right to respond. Yes, it would be a global catastrophe for humanity. But why do we need such a world in which Russia does not exist?”

The video then concludes with footage of the Sarmat being launched from a missile silo.

So, the United States, NATO, any anyone else who may oppose Russia, you’ve been put on notice, rousing pop song style.

Maidanov has been a prolific Russian musician for years and hasn’t shied away from politics. Many of his songs feature themes glorifying the Russian military, such as “Victory is Ours,” about the invasion of Ukraine, or “Spetsnaz,” an upbeat ballad about Russia’s special operations soldiers. He also serves in the Russian legislature as a member of Putin’s United Russia Party.

As for the Sarmat, nicknamed the “Satan II” or “Son of Satan,” testing began in 2017 and the first successful silo launch was held back in April at the Plesetsk cosmodrome in northwest Russia.

The missile has a reported range of 18,000 kilometers and can carry a 10-ton payload consisting of at least 10 nuclear warheads. Russia has also claimed that the Sarmat will be able to carry the Avangard hypersonic missile.

In March 2018, Putin announced in a speech to the Russian parliament that the missile would render NATO’s strategic defenses “completely useless.”

Russian state media organization TASS has claimed that the Sarmat will enter service by the end of 2022, although given how everything else in the Russian military operates, it’s doubtful that will come to pass. It is, however, probably the only intercontinental ballistic missile with a song dedicated to it.

The U.S., of course, is no stranger to jingoistic pop songs of its own. Back in 1942, Frank Loesser’s “Praise the Lord and Pass the Ammunition” was a chart-topper. Twenty years ago, there was Toby Keith’s “Courtesy of the Red, White, and Blue (The Angry American),” with its lyrics about putting a boot in your ass because it’s the American way.

For now, considering how well-received the Space Force’s song was, just be glad the Department of Defense isn’t responding to “Sarmatushka” and trying to top the Billboard 100 charts with songs about its latest projects.