The Air Force is investigating how one of its KC-135s appeared on a flight tracker with the call sign. 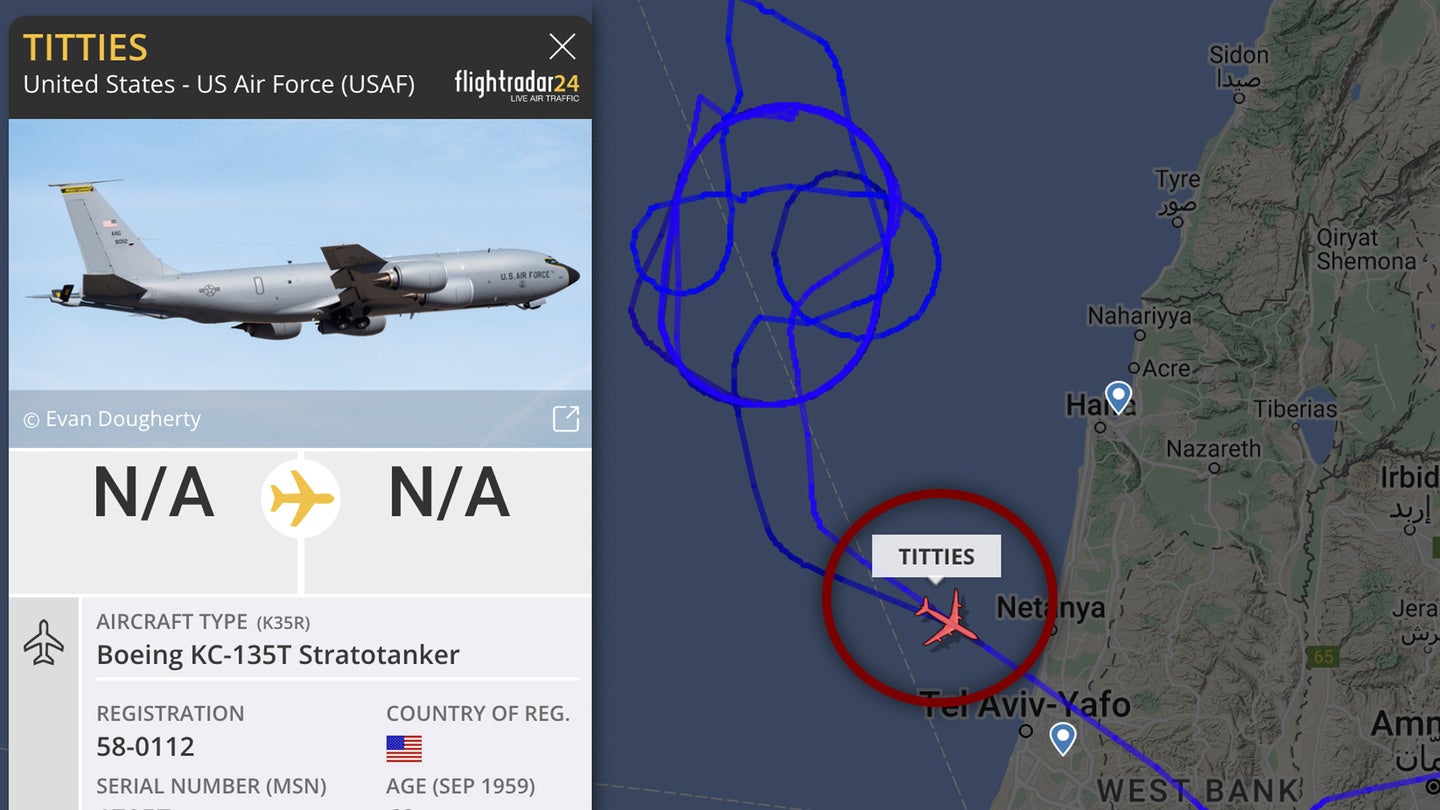 Hertzog did not say what this call sign was, but the KC-135 had been identified as “Titties” on Flight Radar 24, a flight tracking service.

“We have confirmed that the KC-135 Stratotanker, official call sign INMATE72, transmitted an inappropriate display name on 16 December,” Hertzog said in an email. “Commanders in the AFCENT [U.S. Air Forces Central Command] chain of command are taking appropriate action to address this behavior which is inconsistent with the high standards of professionalism and airmanship we expect and demand from our aircrew.”

On Friday, Hertzog said the Air Force was looking into how the KC-135 with the call sign “Inmate 72” had been identified as “Titties” on Flight Radar 24. Initial indications are that the aircraft belonged to the Pennsylvania Air National Guard’s 171st Air Refueling Wing, which is currently deployed to the U.S. Central Command’s theater of operations, though no Pennsylvania Air National Guardsmen were crew members on that particular KC-135, said Senior Master Sgt. Shawn Monk a spokesman with the 171st Air Refueling Wing.

“AFCENT is aware that a tanker operating in the CENTCOM AOR [Central Command Area of Operations] whose actual call-sign is ‘Inmate 72’ is currently being tracked on Flight Radar 24 as call-sign ‘Titties,’” Hertzog told Task & Purpose on Friday. “The cause is unknown at present but AFCENT and 379 AEW [379th Air Expeditionary Wing] are investigating.”

After this story was first published, Flightradar24 spokesman Ian Petchenik told Task & Purpose that the call sign “Titties” was broadcast from the aircraft.

“We displayed it on the service as it came out of the aircraft,” Petchenik said on Friday. “The aircraft at the time was seen by 94 separate receivers in the area. This isn’t a question other than: That was plugged into the flight computer and that is what came out as the call sign.”

As of Friday afternoon, FlightRadar24 was no longer displaying any information about the KC-135.

News of a U.S. military plane appearing to have an unconventional call sign comes little more than a month after Air Force officials denied that another KC-135 aerial tanker had flown in a penis-shaped pattern near a Russian base in Syria.

“The KC-135 Stratotanker (RAKE71) operating in the Eastern Mediterranean adjusted between multiple different flight tracks during the course of the mission,” Capt. Ryan Goss, a spokesman for U.S. Air Forces in Europe, said at the time. “While these adjustments and movements appear to create a vulgar outline, there was no intent by the pilots or the unit to do so. As we continue to look into this, USAFE-AFAFRICA, AMC [Air Mobility Command] and the USAF will continue to maintain the highest standards of professionalism and airmanship.”

UPDATE: 12/18/2022; This article has been updated with confirmation from AFCENT of the display name being broadcast.