That's one way to celebrate an epic climb. 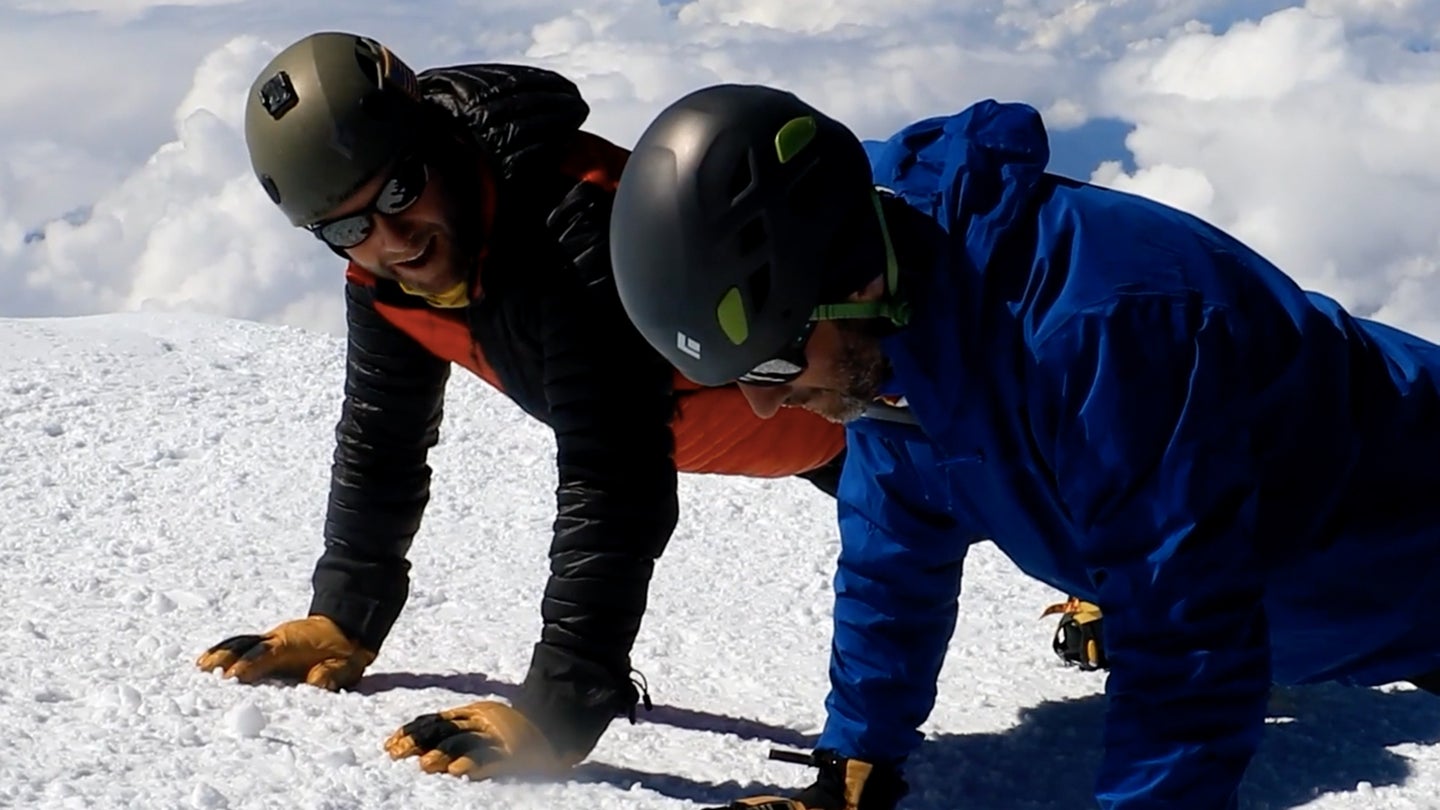 A mountaineer leads two of his fellow mountaineering teammates in celebratory pushups after they reach the 20,310-foot peak of Alaska's Denali in June, 2021. The group is hiking North America's tallest mountain peak as part of a resiliency-building challenge. (Screenshot via video by Air Force Lt. Col. Rob Marshall).
SHARE

The sun was shining on Air Force Lt. Col Rob Marshall and his buddies last month when they got down on their hands and feet and cranked out 20 push-ups on the snow-capped peak of Denali, the highest point in North America.

Though many people might not choose to do push-ups after climbing up 20,310 feet of snow and ice, it was easy-peasy compared to the ordeal the handful of airmen and veterans had just been through. The trial included a grueling five-hour climb over a near-vertical sheet of ice; an emergency bivouac at 19,500 feet where a climber nearly died from high altitude sickness; and a helicopter evacuation that was among the highest ever performed by the local National Park Service Rangers.

“I was awake for 40 hours during this event and so were the majority of our climbers,” wrote Marshall, who led the climb, in a June 19 Facebook post about the medevac. “I’m proud to say that every single one of them stayed tough, never complained, never faltered, and kept the team dynamic and strong throughout the difficult ice wall and emergency bivouac. If any one of them had quit or given up, it would have been catastrophic. Thank goodness for this strong team we had!! I’m proud to have climbed with each one of them.”

When they finally reached the peak, it was a relief for everyone involved.

“Push-ups on top of America, whew!” said one climber in a video published on Monday.

The hike up Denali was a long time in the making, especially for Marshall. The 42-year-old former Air Force special operations pilot had previously conquered the highest peaks on each of the six other continents. When he finally topped Denali last month, he became the first U.S. service member to complete the Seven Summits Challenge. But even Mount Everest, the highest mountain in the world, was not as difficult as Denali, Marshall said afterwards.

“Denali remains the hardest of the Seven Summits in my opinion,” he wrote on Facebook. “Carrying my own body weight in food/fuel/gear is very difficult and during this trip we not only had to do that, but we also chose to go where few Denali climbers go.”

Four other airmen and veterans joined Marshall on the Denali climb: Lt. Col. Mark Uberuaga, 42, an active-duty UH-60 Black Hawk pilot; Maj. Marshal Klitzke, 38, an Air Force reservist on active-duty as a flight instructor at the U.S. Air Force academy; Mark Schaffeld, 55, a veteran who suffered a traumatic brain injury during a car crash while serving in Air Force Security Forces in the late 1980s; and Wesley Morgan, 37, an Air Force veteran who separated as a captain.

The climb was billed by the Air Force as a chance to highlight “proactive resilience,” where airmen can rely on themselves and each other to get past hardships both in and out of the military. The five climbers were great examples, since each had their own personal hardships to overcome. For starters, Marshall was part of a training mission to Albania in March 2005 where an MC-130 cargo plane crashed in a mountain range in bad weather, killing all nine airmen on board. He helped organize the search and rescue efforts, but it was too late.

“It really shook up my sense of mental health and resiliency because death was so close,” Marshall said in a press release. “It could have been me.”

The nine dead airmen were friends who Marshall had worked with on a daily basis. He became depressed, and at first he used alcohol to deal with the loss. But when that failed, he began to climb.

Marshall found that mountaineering was physically and mentally challenging, it created lifelong bonds with fellow climbers, and it was spiritually fulfilling.

“Nature is my church,” he said. “That’s where I feel closest to God, to spirit, to perfection. Watching the sun rise or the sun set from these high mountains just fills up my spiritual bucket.”

Besides the loss of his fellow airmen in 2005, Marshall was also overcoming two torn meniscus in his left knee when he climbed Denali. Physical injuries were a common trait among the Denali crew: Uberuaga was recovering from spinal reconstruction surgery in December after two of his vertebrae were removed in order to excise a major spinal infection, according to the Air Force.

“Training for Denali helped me and my caregivers set and achieve challenging goals instead of settling for a life of mediocrity,” Uberuaga said. “Outdoor adventure sports provide me the best form of my creative expression and I find an abundance of energy when considering and executing trips into the mountains.”

Schaffeld, who currently works at the Boise Veterans Administration Medical Center, said mountaineering has helped him overcome his TBI from the 1980s. But despite their vast experience, the five airmen had to dig deep to get over Denali. Marshall explained that the plan was to start with the normal West Buttress route up to 14,000 feet and then shift to the more challenging Upper West Rib for the final 6,000 vertical feet.

“The plan is to leave most of our gear at 14,000 feet and climb the last 6,000 feet and ski back down to our camp, all in one day,” Marshall said before the trek. “That last day is going to be extremely challenging, but we think there is value in trying something harder than average.”

The special operations pilot could not have known then just how “extremely challenging” the summit day would turn out to be, but he also could not have chosen a better crew to suffer through it with. The Air Force published multiple videos on Monday of the crew looking upbeat and happy despite the steep, cold, wind-swept conditions.

“Flags are out, yup yup yup!” Marshall says about the unfurled American and Air Force flags in one video of the base camp at 14,000 feet, where icy winds whip across the chest-deep snow.

“Hey is this the highest kitchen you’ve ever cooked in?” Marshall asks “Basko” (Uberuaga’s nickname) as he melts snow for drinking water on the balcony of the Upper West Rib.

A third video shows Uberuaga making quesadillas in a tent atop a pile of snow.

Then the “extremely challenging” day happened, and it lived up to the hype. The Upper West Rib climb was much slower than expected due to the soft snow conditions, Marshall explained on Facebook. The climbers sank into loose “sugar” snow which would crumble and make them lose their footing and spend extra time and energy on every step. The road off the Rib and towards the summit was also harder than anticipated because there was a 100-foot wide band of hard blue ice stretching across it.

“To exit, we had to cross this, which required skilled ice climbing using less than optimal mountaineering axes and crampons,” Marshall wrote. “It was a tough challenge, but everyone made it, even with a few people taking falls but caught by their rope team.”

The ice climbing was led by Uberuaga, who Marshall said was the best mountaineer in the Air Force. Even so, they didn’t finish until 1:30 a.m., by which time five climbers were reporting ‘danger cold’ toes and one was showing signs of altitude-related sickness. They set up their tents to warm up in an emergency bivouac, but the unnamed climber with altitude sickness collapsed and showed symptoms of a high altitude pulmonary edema, a life-threatening condition where fluid pools in the lungs. HAPE is among the most common causes of death at high-altitude, according to one study.

Marshall and his buddies gave the climber medicine for HAPE, then called the National Park Service for a rescue. The rest was clockwork.

“My mind is still blown at how smoothly the next few hours went,” he wrote on Facebook. “As we huddled in the tent, our sick climber began to have improved breathing thanks to the medication and three hours later the Park contacted us to say a helicopter was nearly there.”

It also helped that the airmen were no strangers to radio traffic, and that experience shows in one video of Marshall calling for NPS support during the emergency bivouac. Soon enough, a helicopter appeared overhead with a rescue basket dangling from a cable. Uberuaga and Marshall loaded the climber aboard and watched the machine whisk him off the mountain. They later learned that the 19,500-foot rescue was the highest the pilot had ever accomplished.

“We were so relieved that our climber was off to get medical attention and we were super impressed by the efficiency of the NPS,” wrote Marshall, who never had to use HAPE medicine or call in a rescue on a climb before. “Huge kudos to them!”

The remaining climbers went on to summit the mountain, tasting sweet victory at last.

“From a resiliency standpoint, this is a good analogy,” wrote Marshall afterward. “No one wakes up expecting to end up in an emergency situation that day. Nor does anyone wake up expecting depression, traumatic experiences, or injury to strike. But when it does, are you prepared? Do you have a tool kit that you can dig into for a solution?”

The Denali crew sure did. Their training, equipment, friendship, and faith got them through some of the most challenging terrains in the world, Marshall said.

“Luckily we had all these going for us and therefore everyone made it home in good spirits and our evacuated climber felt better quickly due to the reduction in altitude,” he wrote. “It was a serious situation and I’m grateful it worked out the way it did.”