"The Home Depot has a long tradition of hiring our veterans ... I think the advantage we (veterans) have is the discipline and structure the military teaches us" 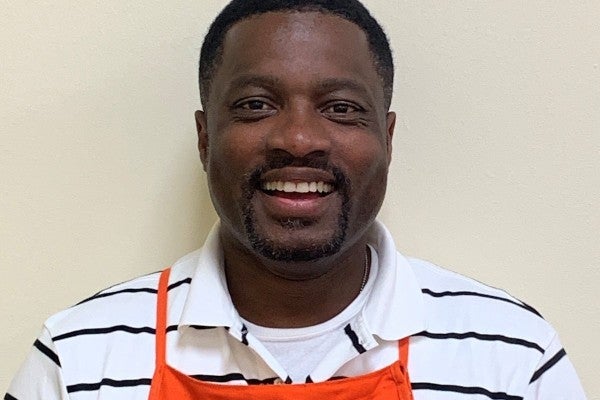 Editor's Note: The following story highlights a veteran at The Home Depot committed to including talented members of the military community in its workplace, The Home Depot is a client of Hireprupose, a Task & Purpose sister company. Learn More.

Cramped inside a U.S. Army tank with three of his teammates in Cold War Germany, a young Tony Harrison felt the thrill of driving 60 tons of steel across the frigid ground.

He and a friend had joined the Army together in the summer of 1987, hoping to contribute to their country's security while securing a future for themselves through the G.I. Bill. But little did Harrison know that the lessons in teamwork, organization, and personal discipline that he learned in the Army would provide valuable lessons for business administration.

In a team of four, collaboration was essential for success. Harrison quickly learned to get along with people very different from himself, communicate effectively, and appreciate the value of roles.

“I enjoyed the discipline that the Army taught me, along with the lifelong friendships,” he says. “It helped me to be a more well-rounded individual that could bring structure and organization to a unit.”

Over time, he rose to the advanced position of tank gunner, and was assigned additional inventory responsibilities. In his free time, Harrison loved traveling throughout Europe, exploring Paris and London, and watching bullfights in Spain.

In 1992, Harrison decided it was time to see what the civilian world had to offer. Within a week of discharge, he secured an order selector position at a warehouse for a grocery chain.

“I was used to the physical work, which helped me adapt very well,” he says. “And working in retail gave me an opportunity to be a thinker.”

Harrison's organizational skills and leadership potential were apparent, and over the course of 12 years, he moved up the ladder of the logistics team to the position of inventory control superintendent. Then Harrison heard about an opening for an inventory control manager at a local Home Depot distribution center.

“A former boss who worked for The Home Depot told me about all of the different career opportunities that they offered,” he recalls. “He knew I was a veteran, and he said it was a great place with a great culture behind them.”

Intrigued, Harrison applied for the position and was hired.

“The Home Depot has a long tradition of hiring our veterans,” he says. “I think the advantage we (veterans) have is the discipline and structure the military teaches us.”

Working for The Home Depot

Fourteen years later, Harrison is still happily employed with The Home Depot. He now works as the general manager of a Dallas-based distribution center, where he is responsible for a team of approximately 40 associates who keep The Home Depot stores in parts of Texas, Louisiana, and Arkansas stocked.

“My responsibility is to take care of all of my associates and their safety while we're focusing on shipping goods into our stores,” Harrison says.

Although his years of logistics experience and business administration classes prepared him for much of his day-to-day work, Harrison notes that to succeed in the associate-centered culture at The Home Depot, he relies on the teamwork and organizational skills he first developed in the Army.

“The organization, the structure, the command skills, those things have really helped me to transition,” he says. “In the Army, you had to take care of one another, so the military definitely taught me that I had to take care of the folks who are out there taking care of you.”

Harrison also supports his employees by helping them advance in their careers at The Home Depot, just as leaders in the military support their subordinates in promoting to the next rank. And he directs associates in need of financial or other assistance to The Home Depot's employee resources.

“At The Home Depot, we believe in showing empathy and understanding to our associates,” he says. “I think having that background from the military helps me understand people from all walks of life. Because in the military, you don't know who your battle buddies are going to be, and you have to make sure you take care of people from all walks of life.”

Harrison also enjoys the opportunities The Home Depot gives him to support his fellow veterans, both in his workplace and in his community. He coordinates recognition events for veteran associates on military holidays, as well as during The Home Depot's annual Celebration of Service event.

“I was a part of the Celebration of Service for our veterans,” he says. “This was a very humbling experience to see how The Home Depot stands by our veterans and supports them on such a grand stage. To be a part of this is an experience that I will not forget.”

Associates also participate in Team Depot community service events, many of which benefit military families and veterans. Harrison and his team recently visited a local VA hospital during a Team Depot event to visit and assist sick veterans.

“Giving back to veterans is personal to The Home Depot, as more than 35,000 of the company's associates have served in the military,” the company's website reports.

And of course, The Home Depot continues to seek out veteran employees like Harrison through military hiring events.

“The single piece of advice I would have for someone separating from the military and seeking employment at The Home Depot is to focus people,” says Harrison. “You have to be an individual that looks to put people first.”