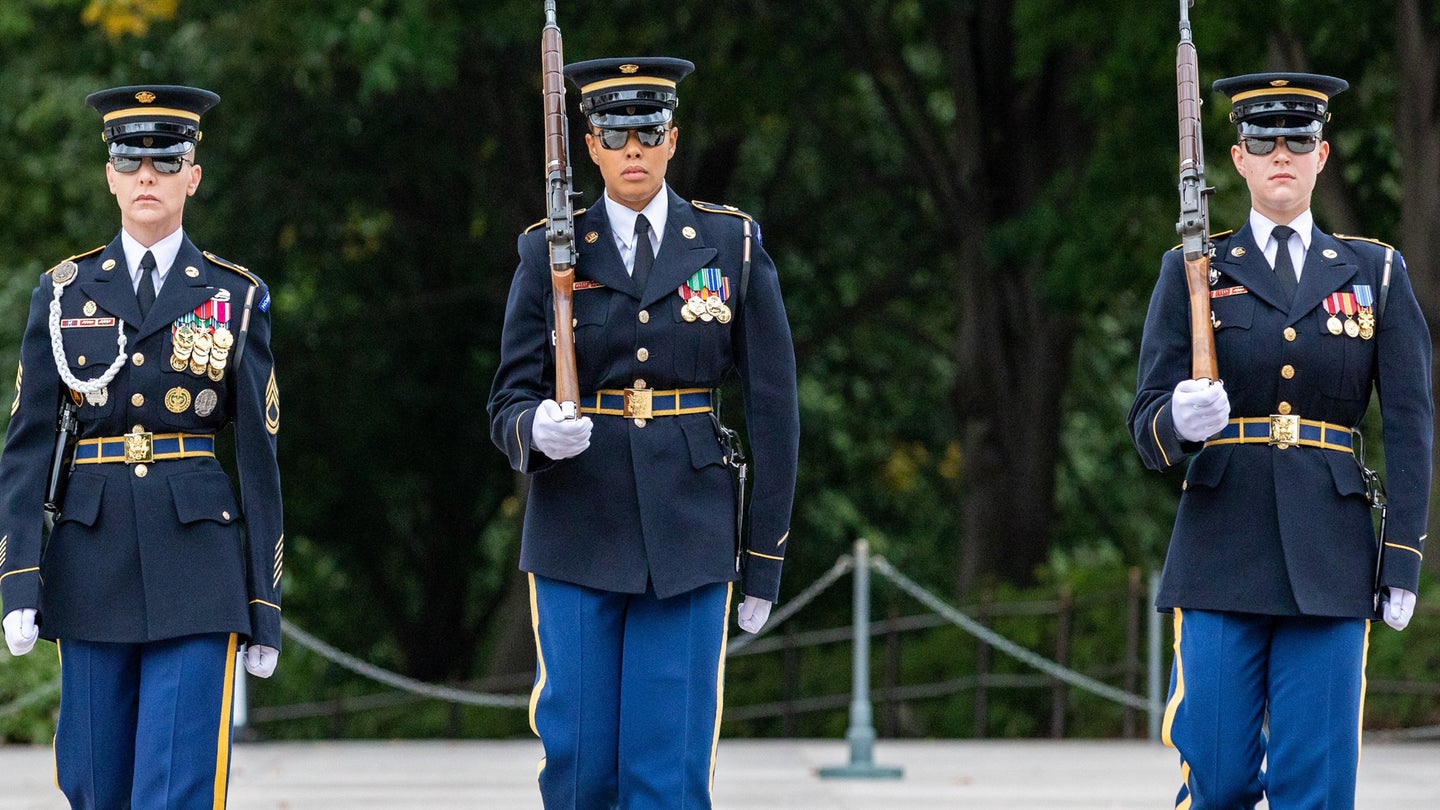 The Tomb of the Unknown Soldier was recently guarded by an all-woman team of three sentinels for the first time in history.

“History was made” at Arlington National Cemetery, said Col. Patrick Roddy, commander of the 3rd U.S. Infantry Regiment (Old Guard), the Army’s official ceremonial unit and escort to the president, in a post on Twitter. “For the first time in the 84-year vigil, on the 30,770th day of the continuous guard, an all-woman changing of the guard occurred under the direction of the 38th Sergeant of the Guard, SFC Porterfield.”

Sgt. 1st Class Chelsea Porterfield, who is the first woman to hold the position of sergeant of the guard, completed her final walk of guard duty at the tomb on Wednesday, according to officials. In photos shared online, Porterfield can be seen marching the symbolic 21 steps alongside two other soldiers and inspecting their M14 rifles.

Soldiers have been guarding the tomb for 24 hours a day, seven days a week since 1937, according to Arlington National Cemetery. Dedicated on Nov. 11, 1921, by President Warren G. Harding, the tomb was first established in honor of the many American soldiers lost during World War I who remain “nameless and faceless,” and are, as the tomb inscription says, “known but to God.”

Tomb guards were initially posted only during daylight hours at the tomb in 1926 “after one too many tourists had used the grave as a picnic table,” an Army news release said. Guarding the tomb became an around-the-clock affair eleven years later and the Army eventually designated the Old Guard as its ceremonial unit in 1948. Since then, sentinels like Porterfield and fewer than 700 soldiers have “walked the mat” during 27-hour guard shifts near the final resting place of unknown service members killed during World War I, World War II, and the wars in Korea and Vietnam. (Some unknowns were later identified and disinterred from the grave.)

“I get to represent my fallen comrades and my fellow soldiers everywhere,” said one sentinel in 2010. “It means a lot to me. I’ll definitely carry it with me the rest of my career.”

With Porterfield leaving her position as sergeant of the guard, which oversees the relief and posting of sentinels every hour during the summer and every half-hour during the winter, officials didn’t know when there would be another opportunity for an all-women guard, Roddy said.

“When a sergeant of the guard departs, their last walk is usually presiding over a changing of the guard, followed by a rose ceremony,” Roddy told Task & Purpose. “There has never been an all-woman changing of the guard before. While we’ve had two women guards assigned to the Tomb for a while, they’ve served in different reliefs (like a squad or a shift) and their schedules haven’t aligned for a guard change between them.”

“It wasn’t anyone’s intent to ‘engineer’ this event, but we knew an event like this had significant meaning,” he added. “So in honor of SFC Porterfield’s service, and at her request, the schedules were aligned for the first all-woman changing of the guard as part of her last walk.”

Roddy said it was a small event at the beginning of the day with little fanfare.

“This was really about recognizing SFC Porterfield’s service to the Tomb during her tenure there,” he said. “We recognized this is important, which is why we’ve shared it, but at the same time didn’t want to make it a spectacle due to the solemn nature of their mission and [the] continual dedicated service of all who walk and have walked the mat continuously for 84 years.”

Tomb guards train for six to nine months before they can be assigned as sentinels. They are chosen for the “prestigious and highly selective post” only after a rigorous training regimen that includes marching, uniform preparation, and study of military history. Much of the training is done in front of the tomb in the middle of the night when the cemetery is closed and there are no crowds.

“You do training during the day…manual, uniform, uniform classes. And then at night, you get your hours of training in,” Staff Sgt. Kevin Gilliam said in a 2010 Army news release. “The guards who are posted at night aren’t a ceremonial guard. They’re in [Army Combat Uniform]. So they’re working on walking the mat, perfecting their lines, angles. We also do training as a whole. The whole squad will go out at night and train the guard changes and things like that.”

The end of training doesn’t necessarily mean things get easier. Tomb guards work on a regular rotation of guards similarly organized by height. And time off “isn’t exactly free time,” according to the Society of the Honor Guard: “It takes the average Sentinel 8 hours to prep their uniform for the next workday. Additionally, they have Physical Training, Tomb Guard training, and haircuts to complete before the next workday.”

Guards carefully walk the 63-foot mat in front of the tomb during their shifts in a ritual honoring the fallen that alludes to the 21-gun salute. They usually remain silent, but occasionally have been filmed warning those who approach too closely to the hallowed ground they guard.

“What we do for our entire post, we take 21 steps across the mat, turn and face D.C. for 21 seconds, turn back, face down the mat, change shoulders and do that process over and over again. Twenty-one alludes to the 21-gun salute, which is the highest military honor. So we give them that salute as many times as we can during the hour or half-hour,” Gilliam said.

Porterfield spent most of her early 20s overseas or on deployment, according to the Army, and later served as a drill sergeant training new recruits. In a video shared by the Old Guard in late March, the sergeant urged fellow soldiers to always lead by example.

“To do the right thing at the right time even when no one’s looking and to make sure you provide a good example for not only female soldiers but male soldiers, so they know who and what to look up to,” she said, later adding: “Never limit yourself because of somebody else’s lack of imagination, and never limit somebody else because of your lack of imagination. If you want to do something, do it.”