''After all that you've given, the last thing you should be doing is fighting the very country that you gave so much to. It makes no sense.' 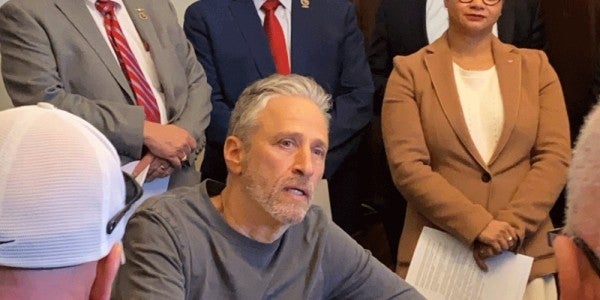 “Quite frankly, this is not just about burn pits — it's about the way we go to war as a country,” Stewart said during his Jan. 17 visit to Washington, D.C. “We always have money to make war. We need to always have money to take care of what happens to people who are selfless enough, patriotic enough, to wage those wars on our behalf.”

Stewart traveled to Capitol Hill to meet with MOAA and other veterans groups that make up the Toxic Exposures in the American Military coalition, a MOAA news release says.

Once widely used on U.S. bases, burn pits are believed to have contributed to cancer, skin diseases, and respiratory illnesses among veterans of the Iraq and Afghanistan wars. As of Jan. 6, a total of 192,000 veterans and service members have reported health problems that they believe are related to their deployments by taking part in the Department of Veterans Affairs' Airborne Hazards and Open Burn Pit Registry.

“We want to make sure we do this smart,” Stewart said on Jan. 17. “We're not going to get a lot of shots with this. “After all that you've given, the last thing you should be doing is fighting the very country that you gave so much to. It makes no sense.”

Stewart has long been an advocate for troops, police officers, firefighters, and others who have fallen ill as a result of exposure to toxic chemicals. Last year, he helped to shame Congress into permanently reauthorizing the September 11th Victim Compensation Fund, which pays claims to first responders who became sick or died as a result of their work at the World Trade Center and Pentagon.

At the Jan. 17 meeting, Stewart thanked the Vietnam veterans in attendance for fighting to make sure that troops exposed to Agent Orange finally received care for related diseases.

“You are the guys who pioneered the idea that chemicals and toxicity … had a terrible effect on all those who fought there,” Stewart said. “And you had to fight and continue to fight so the next generations don't have to do that.”

Democratic presidential candidate Sen. Elizabeth Warren recently told Task & Purpose that she would require the Defense Department to track and record any toxic chemicals that troops are exposed to if she were elected president.

“We need to ensure that adequate funding is allocated to research diseases that may be connected to certain kinds of exposure. And we must treat those affected without delay – we cannot allow today's veterans to wait for earned health care,” Warren said on Jan. 12.