National Guard veteran Amie Muller believed deployments to Iraq caused the cancer that killed her. She worked and lived next... 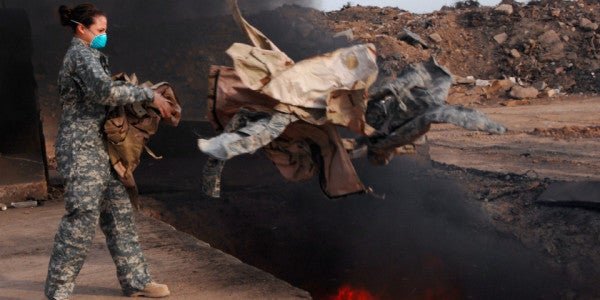 She worked and lived next to burn pits that billowed toxic smoke night and day at an air base in northern Iraq. After returning to Minnesota, she began experiencing health problems usually not seen in a woman in her 30s.

Muller died a week ago, nine months after being diagnosed with Stage III pancreatic cancer. On Friday, more than 800 of her friends and family gathered at a memorial service in Woodbury to remember the life of the 36-year-old mother of three. A pastor noted her loss was both painful and seemingly incomprehensible.

“I wish there was a simple way to explain what has happened to Amie. Why Amie is gone,” said Pastor Lisa Renlund. “Life truly isn’t that simple. It can get messy. It can feel complicated. It can seem unfair.”

But others also are remembering Muller’s battle to win recognition from the U.S. government for victims of the burn pits, which have the potential of becoming the Iraq and Afghanistan wars’ equivalent of the Vietnam War’s Agent Orange. It took nearly three decades for the U.S. government to eventually link the defoliant used in Vietnam to cancer.

Muller first told her story in the Star Tribune last year shortly after she was diagnosed.

In an interview in August, she spoke about the frustrations of a life put on hold. Fatigued from chemotherapy and complications from medical procedures, she also talked about getting the word out about what she believed is the burn pits’ toxic legacy.

“It’s kind of like what you’d imagine what hospice would feel like, where you are just waiting and waiting and you don’t have any energy,” she said. “But I want to make sure other people are getting their voices heard, too.”

In 2005 and in 2007, Muller was deployed to Balad, Iraq, with the Minnesota Air National Guard, embedded with a military intelligence squadron. The burn pit near her living quarters there was one of the most notorious of the more than 230 that were constructed at military bases across Iraq and Afghanistan before their use was restricted in 2009. Items ranging from Styrofoam to metals and plastics to electrical equipment to human body parts were incinerated, the flames stoked with jet fuel.

Covering more than 10 acres, Balad’s burn pit operated at all hours and consumed an estimated 100 to 200 tons of waste a day. It was hastily constructed upwind from the base, and its plumes consistently drifted toward the 25,000 troops stationed there.

Muller fatigued easily after returning home and began to wonder whether a host of ailments from migraines to fibromyalgia were connected to her military service at Balad. She was diagnosed with cancer last May.

Julie Tomaska deployed with Muller in 2005 and 2007 and the two lived side by side. Shortly after coming home, Tomaska, too, suffered from chronic fatigue, headaches and digestive problems. Her disability claim with the VA was approved with a diagnosis of “environmental exposures.”

The two became almost inseparable after Muller was diagnosed. Tomaska helped navigate the paperwork for Muller’s disability claims and attended treatments with her at the Mayo Clinic, shooting selfies in the exam room.

She was at her friend’s bedside when she died. Now, Tomaska and Muller’s family hope to establish a foundation for military families affected by pancreatic cancer.

“I promised her that I would make sure that everybody knew about this,” she said. “It’s hard to be so proud and happy about the military accomplishments you made when you feel like you died because of this, and because we’re having friends drop like flies.

“When we came home we felt like we were lucky and it just doesn’t feel like that anymore.”

The Department of Veterans Affairs’ position on burn pit exposure has not changed. It believes research has not established evidence of long-term health problems.

But there has been movement. A registry for service members based on where they were stationed during deployments now includes more than 100,000 people.

Earlier this month, U.S. Sens. Thom Tillis, R-N.C., and Amy Klobuchar, D-Minn., introduced bipartisan legislation, the Helping Veterans Exposed to Burn Pits Act, that would create a center of excellence within the VA to better understand the health effects associated with burn pits and to treat veterans who become sick after exposure.

Klobuchar said she is encouraged by work being done at the Minneapolis VA looking at links between exposure to toxic substances and the use of anti-inflammatories for treatment.

“What’s important to me is that we keep doing this research and we don’t close our eyes and pretend that it’s just a coincidence that these veterans came home with these illnesses,” she said. “It’s a sad chapter, whether it was Agent Orange or Gulf War Syndrome, that people had to wait this long. We don’t want this to happen again with burn pits.”

Joseph Hickman, a veteran and author of “The Burn Pits: The Poisoning of America’s Soldiers,” sees the legislation as progress but still worries that many veterans are being stonewalled and their benefits claims delayed, often until after they have died.

“When we sent these veterans to war, we didn’t have any questions for them. We just sent them off and had total faith in them,” Hickman said. “Now they are coming home and they are being questioned by the VA and the [Department of Defense] and a lot of them are being told they are not being honest about their illnesses. We had so much faith in them when they left, we’ve got to have faith in them now and believe them.”

At Muller’s memorial service Friday, honor guards stood solemnly, their heads bowed, next to a portrait and an urn containing her remains. The Patriot Guard stood outside in a growing snowstorm as mourners entered for the services at Crossroads Church in Woodbury.

Photos of Muller’s life that included Caribbean family vacations and military deployments and training were projected on giant screens in the sanctuary.

Retired Lt. Col. Audra Flanagan noted that Muller was trained as a military photojournalist. She created a program to honor fallen service members by providing a video and photographic record for family members. She covered services for those who were killed in action or took their own lives, documenting the dignified transfer of remains, military funerals and honor guards.

She covered services for a Tuskegee airman and for a soldier killed in the Fort Hood mass shooting. As a graphic artist, she designed the state’s Gold Star license plate for spouses and parents of military members killed in active service.

“No one could have honored our fallen service members with the same heart and grace as Amie,” Flanagan said.

Muller will be buried Monday at Fort Snelling National Cemetery.