A recent court decision by an administrative law judge for the Department of Labor found burn-pit exposure was linked to... 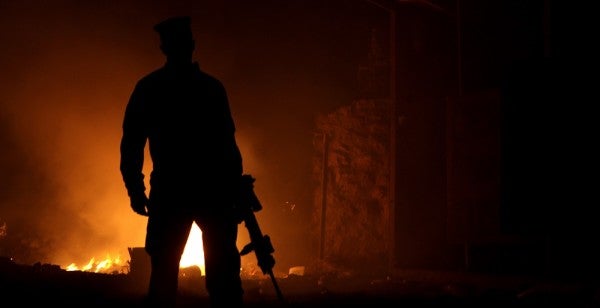 A recent court decision by an administrative law judge for the Department of Labor found burn-pit exposure was linked to lung disease in a federal contractor’s case, Fox News reported on Thursday.

The case quickly fueled hopes among military veterans that the Department of Veterans Affairs may follow the ruling’s lead.

For years, veterans’ advocates have been pushing the VA to adopt burn-pit exposure as a presumptive-service connected disability, assumed to have been caused by serving in a specific area, during a period of time, under a certain set of circumstances. Instead, veterans’ burn-pit exposure claims are handled, slowly, on a case-by-case basis.

For the more than 130,000 veterans who have submitted their names to the VA’s burn pit registry, this most recent case won’t have much of an impact on the department’s current policy. Here’s why.

The decision, made in a U.S. Department of Labor Office for Worker’s Compensation Programs case, blamed open-air burn pits where waste, hardware, uniforms, and other various flotsam were burned across military bases in Iraq and Afghanistan for respiratory problems and lung disease in federal contractors who filed the suit, Fox reports.

While this case could be a boon for federal contractors, the court ruling does not set a precedent for the VA, experts say.

“We don’t think it will impact the VA under Title 38 at all,” Ken Wiseman, the Veterans of Foreign Wars associate director for national legislative service, told Task & Purpose, referring to the federal statute covering the department’s benefits and medical care policies.

“That decision was made by an administrative law judge in a fund under the Department of Labor,” Wiseman said. Decisions made in those cases have no legal precedence the way a federal circuit court ruling would.

However, “It is likely that defense contractors will be aware of this decision, and, therefore, they may be more willing to settle claims such as this,” Doug Jackson, a veterans disability law attorney, told Task & Purpose. “This is a much bigger win for the civilian personnel involved in war than it is for the military personnel.”

That’s not to say the ruling doesn’t do anything to help veterans, advocates and lawyers seeking to change the VA’s stance on burn pit exposure.

Eventually, these rulings and reports can create a tipping point in policy — and in the meantime, they could add urgency to vets’ individual burn-pit claims at the VA: “Cancers and other problems,” Wiseman said, “don’t discriminate between civilians and service members.”