Editor’s Note: The following story highlights a Veteran who shapes military recruiting for Comcast NBCUniversal. Committed to filling its ranks... 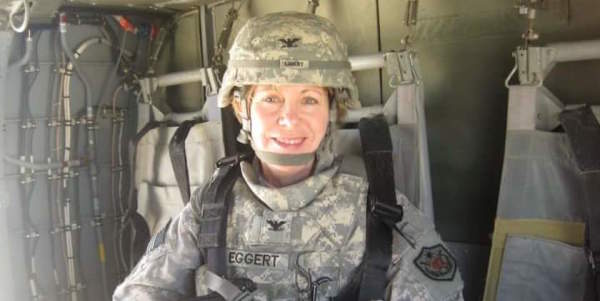 Brig. Gen. Carol Eggert knows the real value of military training kicks in when you need it most. She experienced it firsthand on Aug. 21, 2009, in Baghdad, Iraq, when an explosively formed projectile blasted through the MRAP she and several others were traveling in. The team she was part of quickly came together to recover and respond to the enemy.

In an article for Purple Heart magazine, Eggert later wrote, “I am grateful for the team that day who knew exactly what to do—pull security, tend to the wounded and evacuate as quickly as possible.”

That ingrained response in times of crisis is part of what makes Veterans, as well as National Guard and Reserve members, key assets to the private sector. They know how to lead when situations are turned upside down. While many employers shy away from hiring those who may need to take time off unexpectedly for training or a deployment, Eggert views this community as an often untouched talent pool.

“I see National Guard and Reserve duty as a force multiplier, not a detractor,” Eggert told Hirepurpose recently in an interview. “In most cases, the work and roles these individuals do in their National Guard and Reserve units is drastically different from their civilian jobs. As a result, you have a very well-rounded individual with a mix of qualities, skills and abilities that complement each other.”

After retiring from the Army in 2015, Eggert was hired as the vice president of Military and Veteran Affairs at Comcast NBCUniversal, where she is shaping the way the company recruits, hires, mentors and develops its military community employees, as well as how the company’s programs and business practices best engage customers in the military community.

Hirepurpose spoke to Eggert about the company’s hiring strategy, workplace misconceptions about National Guard and Reserve members, and what both hiring managers and military job seekers can do to better understand one another.

Since you’ve come aboard Comcast NBCUniversal, how has the company changed its approach to hiring Veterans, Reservists, and National Guard members?

Our support for the military community was established well before the Military and Veteran Affairs team was created, whether that was through our strategic philanthropy and in-kind support, or having a culture where military experience was welcomed and appreciated. A perfect example of that established culture is Will Baas, vice president for talent acquisition in Comcast’s Northeast division. Will has been with Comcast for more than eight years. He is also a captain and cryptologic officer in the U.S. Navy Reserve. During his eight years with us, he has received promotions in both his military and civilian careers thanks to the experience, talent, and support each provides the other.

We’ve improved that effort by increasing focus on the military community through specific goals, broader partnerships, and further building a culture of military understanding. We collaborated with our human resources team to expand our National Guard and Reserve benefits program, so that every Comcast NBCUniversal employee who serves receives 15 days annual paid time off for their military duties, such as annual tour and other training. We also increased our support to employees who are called to active duty for long-term training or deployments by providing pay differential (difference between military base pay and their Comcast NBCUniversal pay) and continued benefits for up to three years. And, we’ve established a military concierge service in our human resources department, with the sole focus of supporting our National Guard and Reserve employees, their families, and their supervisors as they transition between their Comcast NBCUniversal and military careers.

As a military Veteran yourself, what are some of the challenges you see Veterans, Reservists, and Guardsmen facing when transitioning, and how is Comcast NBCUniversal getting in front of those challenges?

One challenge that stands out is the civilian-military divide that exists across the country, where both sides don’t have enough information to understand each other’s perspective as potential employee and future employer. On the military side, often those who transition from active duty do not go to the National Guard and Reserves because of the perception that it’s impossible to balance simultaneous civilian and military careers, or they are concerned that civilian employers will not hire them due to their participation in the National Guard or Reserve component. And on the civilian side, some employers struggle to understand what National Guard and Reserve duty entails; they have concern that those employees could frequently deploy and may place a burden on the workforce.

Carol Eggert, Vice President, Military and Veteran Affairs, speaks during a Statement of Support for the Guard and Reserve Signing Ceremony at the Comcast Center in Philadelphia, Tuesday June 14, 2016, in celebration of the 241st U.S. Army birthday.

We are helping to change that narrative in several ways. We highlight our National Guard and Reserve employee benefits on a military-focused Comcast Careers page to let those who want to keep serving know that they are valued here and that their continued service is recognized and encouraged. We have also educated our recruiters, hiring managers, and employees about our commitment to and the benefits for our National Guard and Reserve members. We’ve created external partnerships to help expand this message, including working hand-in-hand with DoD’s Employer Support of the Guard and Reserve through corporate, regional, and local events; participating in events such as Bosslifts (where local Guard and Reserve units host civilian employers to live “a day in the life of your military employee”); and working with established leaders in this space, like PsychArmor, which is helping us develop an online learning center for America’s employers to understand how to recruit, hire, onboard and retain military talent.

What are some misconceptions about National Guard and Reserve members that you have worked to debunk?

We need to understand that having a military career and a private-sector career does not mean sacrificing one for the other in terms of time dedicated or commitment needed; in fact, most find that each enhances the other. We must widen the aperture, and understand that a specific military skill should not limit choices for employment. Our family at Comcast NBCUniversal is a great example of that. On our Military and Veteran Affairs team, one of our team’s directors, Dave Gaulin, is an Air National Guard pilot, and one of our project managers, Ed Carr, spent 23 years as a combat medic and medical recruiter. The leadership challenges military members face throughout their careers, and their innate ability to work effectively on a team in a fast-paced and multicultural environment are skills that Comcast NBCUniversal wants and needs.

What qualities do you think Reservists bring to the table as employees that make them stand out?

How do you foster a working environment that embraces National Guard and Reserve members who may deploy unexpectedly?

What is one piece of advice you’d offer to a reservist looking to break into a company like Comcast NBCUniversal?

Do the research, understand the employer, research job offerings, and complete the analysis so you can articulate how your skills can benefit the employer. Have complete faith that your military skillset has provided you a good foundation to succeed at a company like Comcast NBCUniversal. All members of the military community, whether they are Reserve and National Guard members, Veterans, or military spouses, have an unmatched ability to adapt to fast-paced situations and become an asset in problem solving. They have the skill of “learning how to learn,” which for National Guard and Reserve members means they have elite skills in working effectively on a team very quickly. That’s perfect for us as an organization that is on the cutting edge of rapidly changing sectors like media, technology and entertainment.

What is one mistake National Guard and Reserve members should avoid as they are applying to jobs?

I would stress that they broaden their search beyond their military specialty. And, to go in a slightly different direction, one thing they should actively do is research the company’s military community culture.

What advice do you give hiring managers who have never worked with Veterans and National Guard and Reserve members before?

Make the effort to understand what your National Guard and Reserve employees do when they are in uniform. Provide support and work with them to build a schedule that allows them to continue their National Guard and Reserve service. They frequently know training schedules well in advance — ask how you can help them work around those responsibilities. Do realize that unscheduled events such as short-term deployments, fires, winter storms, floods, and other state emergencies may come up — build a relationship with your National Guard and Reserve employees so that, when things change or they are notified of a deployment or long-term activation, they walk into your office not filled with dread, but with knowledge that you have their back.