During their service, the five very good military dogs who received American Humane’s Lois Pope K-9 Medal of Courage to... 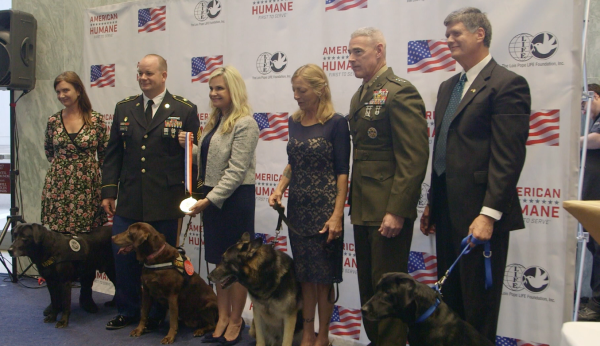 At a Capitol Hill ceremony Wednesday night, American Humane presented the awards to the brave bowsers for extraordinary valor and service.

“Soldiers have been relying on these four-footed comrades-in-arms since the beginning of organized warfare and today military dogs are more important than ever in keeping our service men and women safe,” said American Humane President and CEO Dr. Robin Ganzert in a press release. “At American Humane, which has been working with the U.S. military and military animals for 100 years, we feel it is time to recognize and honor the extraordinary feats and acts of devotion these heroic animals perform every day.”

Army Sgt. 1st Class James Bennett served with Coffee, an explosives detection dog, by his side for almost 10 years. In an interview withCBS This Morning, an emotional Bennett recalled how the chocolate lab saved lives and came under fire “too many times” during three tours in Afghanistan.

Military working dog Capa deployed to Iraq and provided security for the president, the first lady and secretary of defense.

Ranger, a black lab, worked as an explosive detection dog in Iraq and Afghanistan.

The award was given in memoriam to Gabe, a pound puppy from Houston, who completed more than 210 combat missions with 26 explosive and weapons finds in Iraq. The yellow lab passed away in 2013 after retiring from active duty in 2009.

According to CBS, over 1,600 dogs currently serve in the U.S. military. Since the wars in Iraq and Afghanistan began, 34 dogs have been killed in action.

American Humane is accepting nominations for the 2018 awards now. The organization’swebsite provides a submission form availablehere.