Cena, a 10-year-old Black Labrador who served as a Marine bomb-detection dog from 2009 to 2014, received an emotional farewell... 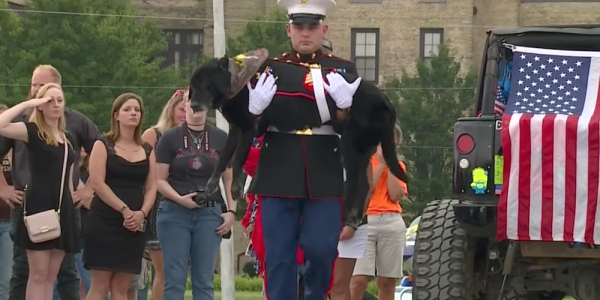 Cena, a 10-year-old Black Labrador who served as a Marine bomb-detection dog from 2009 to 2014, received an emotional farewell before being put to sleep on July 26.

Cena and his handler, former United States Marine Corps Cpl. Jeff DeYoung, gained national attention this week after DeYoung created a bucket list for his furry friend once learning that he had bone cancer, culminating in a final ride in a topless Jeep in their community.

“My whole adult life I’ve had Cena,” DeYoung said, according to the Associated Press. “When I was 19 overseas learning how to be responsible, I had Cena. And now I’m 27 and I’m having to say goodbye to one of the biggest pieces of my life.”

Cena died peacefully in DeYoung’s arms, wearing a set of custom dress blues provided by a local business in their hometown of Muskegon, Michigan.

“Every Marine has to go out in a set of dress blues,” DeYoung told Fox 2 Detroit. “That's just the way we are. He's got his ribbons, he's got his decorations, he's dressed to the nines. He got a fresh grooming service today and we are ready to make peace with what we have to do.”

With a little help from the U.S. Marine Corps League, Michigan state police, city police, the city’s fire department, and hundreds of local residents, DeYoung was able to give Cena, who served three tours in Afghanistan, the farewell ceremony he deserved as a combat veteran. DeYoung carried Cena aboard the USS LST 393 where he was euthanized, and Taps was played in his honor.

“Cena was family to me,” DeYoung said in press statement. “It's always been him and me against the world, and losing him has devastated me to my core. Goodbye, my most faithful friend. I will never forget you.”

A bomb-detection dog, Cena first connected with DeYoung at Improvised Detection Dog training July 2009. The pair deployed to Afghanistan shortly thereafter, and in 2010, they served together in Operation Moshtarak, the largest military operation during of the war in Afghanistan.

Cena was tasked with the detection of more than 300 different types of explosives. He would signal to DeYoung whenever he smelled something suspicious, and an explosives technician would then remove or safely detonate the bomb to clear the path for U.S. troops, according to a release obtained by Task & Purpose.

In 2014, a hip injury forced Cena into retirement, but his mission wasn’t over. Thanks to American Humane, which has supported veterans and military animals for a century, Cena was reunited with DeYoung, this time as his service dog.

When DeYoung was suffering from post-traumatic stress disorder after the loss of a number of battle buddies, Cena kept him from committing suicide — an act that left DeYoung forever grateful.

“Any dog that served overseas deserves exactly what I’ve done for Cena, if not more,” DeYoung said.

A GoFundMe page has been set to help raise funds to buy Cena a headstone.