These Marines In Their Dress Blues Chased Down 3 Suspected Thieves

Marines have served from the halls of Montezuma to the shores of Tripoli and most recently, in a shopping mall... 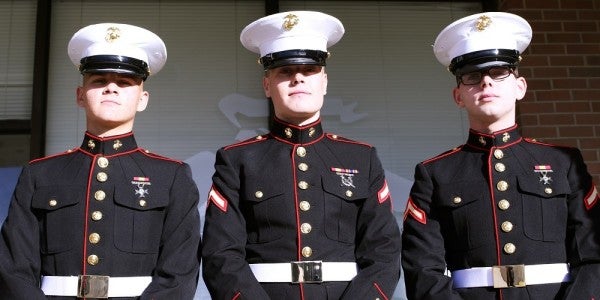 Marines have served from the halls of Montezuma to the shores of Tripoli and most recently, in a shopping mall in Westland, Michigan, where three devil dogs chased down a group of thieves.

On Dec. 22, three teenagers suspected of stealing cellphones at Westland Center, a mall 20 miles west of Detroit, found out the hard way that they couldn’t outrun a group of Marines, even when they were wearing dress blues and corframs.

When Pfc. Blayne Edwards, 18, Pvt. Alex Berezansky, 18, and Pfc. Ryan Delaca, 19, saw three teens run out of the mall and heard a young woman yell that her cellphone had been stolen, they took off in pursuit.

“I didn’t know what was stolen or what was going on,” Delaca told Task & Purpose. “I just wanted to make sure they were caught. Especially around the holidays, people shouldn’t have to deal with theft.”

The Marines pursued the suspects to a parking lot 500 yards from where the chase began, before two of the would-be thieves gave up. The third made it a little farther, before being stopped by a police officer nearby, reports Marine Corps Times.

Police found at least three other cellphones on the suspects that were believed to be stolen.

After the chase, Edwards asked: “Do you really think you can outrun three Marines?”

When asked what went through their minds, the response was a mix of humility and the braggadocio you expect from a young Marine.

“We did it because someone needed help, and we did it,” said Edwards before quipping that “we were running. We got some action. We’re on recruiter’s assistance, so it’s kind of boring.”

While the three Marines joked about their actions, it’s worth pointing out that an all-out sprint through a busy intersection in dress blues is a lot harder than it sounds.

“Running in dress blues isn’t easy, especially when you keep your cover on the whole time,” said Delaca, adding that his foot was actually bleeding afterward.

Edwards, Berezansky, and Delaca are from the area and currently home for temporary recruiting duty. Edwards will soon finish training as a low altitude air defense gunner; Berezansky is training to be a motor transportation operator; and Delaca is stationed at Camp Lejeune, North Carolina, where he serves as a machine gunner with 2nd Battalion, 8th Marines.