College Students Receive Trigger Warnings Over Images Of The Crucifixion

By all accounts — starting with the Gospels — the crucifixion was a brutal affair, during which Jesus Christ was... 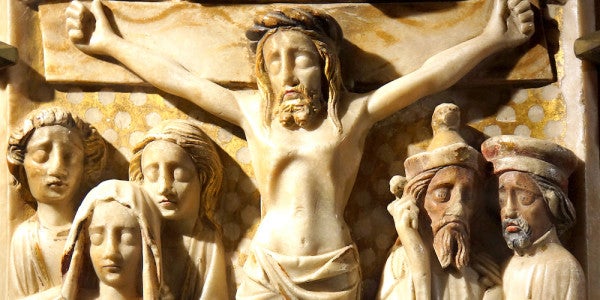 By all accounts — starting with the Gospels — the crucifixion was a brutal affair, during which Jesus Christ was tortured, nailed to a wooden cross, taunted, and left to die a slow and painful death. (It’s where we get the word excruciating.) The event has been recreated countless times since, in painting and sculpture, celluloid and “South Park.” It might be the most common theme in all of Western art. The image is so iconic, in fact, that many of us had probably grown somewhat numb to the bloody savagery it represents, at least until the Islamic State revived the practice.

Related: University Of Chicago Tells Freshmen There Will Be No ‘Safe Spaces’ »

Still, it’s better to be safe than sorry. Some people are really sensitive. College students, for example. In fact, according to a report in the Telegraph, theology students at the University of Glasgow are being warned that the course Creation to Apocalypse: Introduction to the Bible (Level 1) — described as “a whirlwind tour through the whole of the Bible, with particular attention to the stories that have played prominent roles in art, literature, politics, music, and popular culture” — might expose them to “graphic scenes of the crucifixion.”

To be fair — after all, Jesus would expect nothing less — there’s no evidence that students have actually asked for the warning, or that any would necessarily ditch class when the questionable image is presented. All it really means is that the school, like so many universities, is covering its ass because you never know with these millennials. You wouldn’t want to invite a lawsuit.

Task & Purpose takes our readers’ emotional well-being very seriously as well. We know you guys are a bunch of snowflakes — each one delicate, utterly unique, and cold as ice at a distance but liable to melt when touched. So proceed with caution: The following image is extremely disturbing.