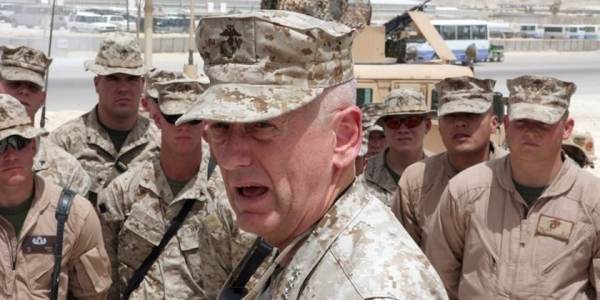 Retired Marine Gen. James Mattis faces his Senate confirmation hearing at 10 a.m. on Jan. 12. Following his opening statements, he will be answering a series of questions from members of the Senate Armed Services Committee. Task & Purpose will be chronicling his remarks in real time.

(10:45): Regarding the differing views of NATO within Trump's administration, Mattis said, “[Trump] understands where I stand and I'll work with other members of the team, the national security team, once the Senate confirms them to carry these views forward.”

(10:50): Sen. Kristen Gillibrand, the Democrat from New York, asked about infantry and women, citing comments on April 16, 2015, where Mattis said he didn't think it was a good idea, adding that the idea of putting women there is not setting them up for success.

Mattis replied, “There are many policies that have been enacted. If someone brings me a problem, I will look at it. In that regard it's all about military readiness. I have no plan to oppose women in any aspect of our military.”

He added, “In 2003, I had hundreds of Marines who happened to be women serving in my 23,0000-Marine division and this is 10 years before I retired, and I put them right into the front lines right alongside everyone else.”

(11:04): On the commitment to end PTSD — the invisible wound of war — and suicide, Mattis said, “This cuts to the very heart of any of us here who have ordered troops into harms way. How could they come home to this great country carrying something that puts them into that sort of despair? You have my full commitment on this.”

(11:12): Regarding Mattis' switch from the military to a civilian leadership position, he said, “The military is under civilian control of this country. Once they've had their say, they've given their input, the military leaders stand back and then carry out the decision to the best of their ability. In changing roles here, I have to make certain that I am carrying out that responsibility principally to advise the elected Commander-in-Chief on the use of force in a way that takes into account all of America's different strengths.”

(11:16): On sequestration, Mattis said, “I understand the need for solvency and security because no nation in history has maintain its military power if it did not maintain its fiscal house in good order.”

(11:23): Regarding U.S. approaches to combatting ISIS and its continued rise, Mattis believes in a multi-faceted strategy.

“We've got to have an integrated strategy, so you don't squeeze them in one place and then they develop in other. It's got to be one that goes after their recruiting and fundraising as well as delivering a military blow against them in the Middle East,” he said.

(11:28): Mattis commented on his moniker, adding, “That nickname was given to me by the press.” Neither “mad dog” nor “chaos” accurately describe his temperament in dealing with crises.

He believes that this is a problem that needs to be addressed not just by the Defense Department but the State Department, the Treasury Department, and our allies globally.

(11:50): Regarding military strategy, Mattis said, “In the paradox of war, the enemy always moves against your perceived weakness.”

He suggested that what the United States needs to do is get policy to match strategy.

(12:15): Regarding Israel, Mattis said that his position is to stick with current U.S. policy, and that he defers to the nominee for Secretary of State regarding changes to that policy. He also suggested he believes in a two-state solution, unless anyone can produce a better solution.

(12:18): On Iran and it's nuclear activities, Mattis believes sanctions would work best if they were international.

(12:29): Cyber doctrine, according to Mattis, is much more complex than just a government or military issue, and the United States doesn't have the kind of framework it needs yet to deal with issues of cyber security.

“Cyber cuts across everything we do today, and so you can't do something in isolation,” he added.