The Nuclear Posture Review, the quadrennial examination of the role of nuclear weapons in the U.S. national security strategy, is... 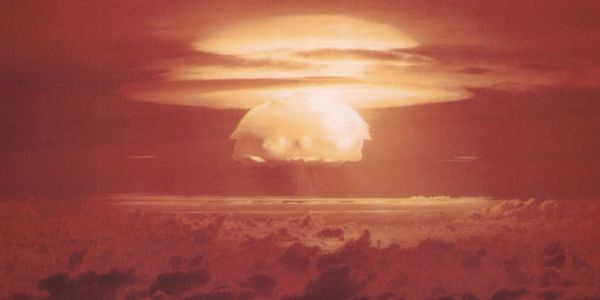 The Nuclear Posture Review, the quadrennial examination of the role of nuclear weapons in the U.S. national security strategy, is basically a field manual for total nuclear annihilation. The document doesn’t just lay out budgetary and resource requirements for maintaining the Department of Defense’s 6,800-warhead nuclear arsenal and the systems that comprise its beloved nuclear triad; it lays out the guidelines and circumstances under which that arsenal can be brought to bear on the world at large. And while normally U.S. nuclear contingencies have been confined to a very specific set of conditions (in the event major biological or chemical attack), the Trump administration’s atomic plan of attack has one chief criterion: We’ll drop bombs whenever we damn well feel like it.

Well, sort of: A Trump administration draft NPR, published by the Huffington Post on Jan. 11, would expand the range of non-nuclear enemy attacks that justify an isotopic U.S. response so that it includes attacks on U.S. infrastructure — a definition that, as three current and senior U.S. government officials told the New York Times, could potentially include large-scale cyberattacks.

An excerpt from a leaked draft of the Trump administration's Nuclear Posture Review published by the Huffington Post on Jan. 11, 2017Screenshot / White House

To be fair, concern about cyber attacks has come to a head in recent years, and not just due to Russia’s election hijinks. In May 2017, the WannaCry cyberattack crippled the British healthcare system (the Trump administration publicly accused North Korea of orchestrating the attack); the next month, Wired detailed how Russia used a Trojan horse malware, BlackEnergy, to disable everything from power grids to railway systems across Ukraine — and the New York Times claims BlackEnergy has been identified in the systems of some U.S. utilities. In August, President Trump went so far as to elevate U.S. Cyber Command to a unified combatant command to “respond rapidly to evolving cyberspace security threats and opportunities globally.”

“In 2001, we struggled with how to establish deterrence for terrorism because terrorists don’t have populations or territory to hold at risk. Cyber poses a similar quandary,” former senior National Security Council official Kori Schake told the New York Times. “So if cyber can cause physical malfunction of major infrastructure resulting in deaths, [DoD can] establish a deterrent dynamic.”

But given the Trump administration’s recent nuclear-related overtures, the idea of a lower standard for nuclear retribution, even if it’s just a statement made for deterrence’s sake, is alarming. Amid historically high tensions with North Korea, Trump insisted on tweeting on Jan. 3 that “I too have a Nuclear Button, but it is a much bigger & more powerful one than his, and my Button works!” His glibness on matters of North Korea’s nuclear program, to say nothing of the efficacy of Twitter diplomacy, has raised major questions among lawmakers regarding his control over the U.S. nuclear apparatus as commander-in-chief.

The proposed NPR may appear in line with the Trump administration’s adoption of the Nixon-era “Madman Theory,” in which “a threat of egregious military action by an unpredictable U.S. President who hated Communism, coupled with generous offers of financial aid” cowed an adversary into submission, according to former Nixon White House chief of staff H. R. Haldeman. But there are two problems with the Madman Theory: First, it requires that this image of recklessness and irrationality be carefully cultivated and not a reflection of actual reality. Second, it didn’t work.

Luckily for us, the draft NPR is not the law of the land, and nuclear priorities frequently change: Just look at Barack Obama, awarded a Nobel Peace Prize shortly after his inauguration in 2009 for his efforts toward nuclear non-proliferation, only to welch on his policy vow during his presidency. In the meantime, let’s see how another celebrity commander-in-chief handles the question of a proportional response: