A meme unto himself, Chuck Norris holds many accolades from his career in entertainment, martial arts, and roundhouse-kick archiving, but... 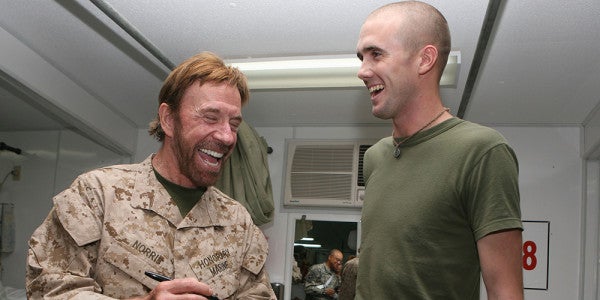 A meme unto himself, Chuck Norris holds many accolades from his career in entertainment, martial arts, and roundhouse-kick archiving, but there’s one commendation he’s particularly proud of: the unofficial title “honorary Marine.”

So he’d like all you devil dogs out there not to screw it up.

“A few years ago your commandant bestowed on me the title ‘honorary Marine.’ I gotta tell you, I've always been proud that,” Norris said in a recent Marine Corps video. (Fun fact: Chuck Norris recorded the making of the first video camera.)

“It's an honor to be associated with such men and women of character,” he says. “Not everyone has the guts, the will, the determination, and courage to accept that challenge, but you did. So protect what you've earned.”

Since 2015, the Corps’ “Protect What You’ve Earned” campaign has served to remind Marines to “keep their honor clean” of behavioral and alcohol problems. Norris, a 77-year old Air Force veteran and founder of the Chun Kuk Do martial-arts school, is the latest vet to give the campaign some love.

After saying his piece, Norris turns to a practice dummy to demonstrate a roundhouse kick, but the video goes dark, presumably due to the centrifugal force created by a Norris-style kick. Fact: Tsunamis are created by Chuck Norris practicing roundhouse kicks on a distant beach.