This Navy Veteran Is Terrorizing His Neighborhood With ‘Taps’ 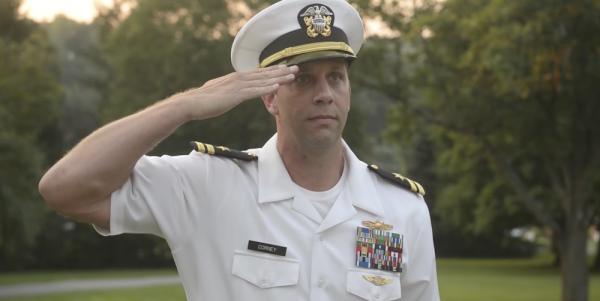 Nine years ago, Army widow Pauline Taylor moved to Pennsylvania to start a new life. Her husband, Army veteran Carlos Taylor, had died from an illness in 2001, and the house they shared in Baltimore, Maryland was filled with the memories of the life they had shared together. Taylor needed a fresh start, and after two years of painstaking research, she chose a house in Glen Rock for its peace and quiet.

It was perfect, she said, until her neighbor, Navy veteran Lt. Cmdr. Joshua Corney, began playing Taps on loudspeakers from his house every night at 7:58 p.m.

“When my husband was buried, they were folding the flag to give to me, and Taps was playing,” Taylor told Task & Purpose. “It’s a constant reminder, every day. There’s nowhere I can go in my home without hearing it.”

This Navy Officer Plays ‘Taps’ Each Night, But His Neighbors Aren’t All On Board

Corney began playing Taps roughly two years ago, at first with a small boom box on his porch, then a full speaker system. The reason, Corney says, is that he made a “promise to God” while serving in Afghanistan that he would honor his fallen brethren upon his safe return home.

Initially, Corney’s neighbors found the daily ritual endearing, but their appreciation quickly turned to dismay. After Corney swapped his boom box for a speaker system, Taylor says that she invited him into her home and shared her story, suggesting other ways that he might be able to honor the sacrifices of fallen soldiers that might not stoke her pain. But Corney didn’t just refuse: Taylor told Task & Purpose that he said, “You seem like an intelligent person and you should be able to get on with your life.”

After speaking to Corney, Taylor got the impression that he is not doing this for the veterans community. “I gave him other suggestions on how to honor veterans, and he simply said he ‘would pray on it,’” she told Task & Purpose.

Following a number of complaints from Corney’s neighbors, the Glen Rock Borough council proposed a compromise in order to appease the Navy vet and address residents’ concerns: Corney could play the Taps from his speakers in honor of fallen service members every Sunday and on flag-raising holidays.

“[The] council fully understood the wide popularity of the playing of Taps in Glen Rock at the time of this decision,” the council announced in a June press release emailed to Task & Purpose. “In recognition of the sensitivity and personal nature of the subject matter, however, Council sought and offered a compromise for all parties.”

But Corney alleges that the town is infringing on his right to free speech, and the American Civil Liberties Union is now representing him (When reached for comment, Corney referred Task & Purpose to the Pennsylvania ACLU).

“I think many people who are widows or widowers may think fondly of their loved ones based on the playing of Taps,” Witold Walczak, legal director for the Pennsylvania ACLU, told Task & Purpose. “In this country we can’t make decisions about how people express themselves based on whether there’s other people who don’t like it.”

But Taylor is not the only neighbor who, despite a respect for Corney’s intentions, desperately wants his nightly renditions to stop. Another close neighbor told Task & Purpose that her husband, also an Army veteran, has Parkinson’s disease and dementia, and the volume exacerbated his condition so much so that they even considered moving (the neighbor declined to be identified for this story citing past threats and harassment from Corney’s supporters).

Other outspoken residents who want Taps restricted to Sundays and holidays are now the subjects of disdain in their community, regardless of their motives. But what they want people to realize is that their desire to limit noise in the evening is not out of disrespect for service members and veterans For many in Glen Rock, it’s simply loud and disruptive — and for residents like Taylor and Corney's neighbor, outright detrimental to their emotional or physical well-being.

Corney is a “self-serving glory seeker,” Taylor told Task & Purpose. “You sir, are an officer, but you’re certainly not a gentleman.”