1200 People Attended A Funeral For An Unclaimed Army Veteran

In a closed casket ceremony, nearly 1200 strangers packed into a Fort Wayne, Indiana, funeral home to honor a man... 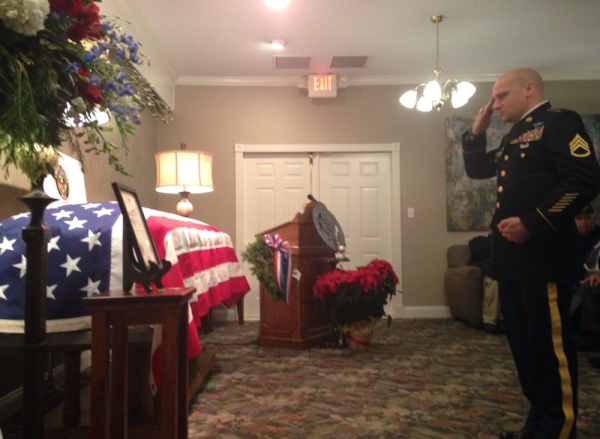 In a closed casket ceremony, nearly 1200 strangers packed into a Fort Wayne, Indiana, funeral home to honor a man they never knew.

The local coroner’s office ran a notice in the local papers and on social media, hoping family or friends would come forward to claim the former Army specialist.

“Due to state law we have to wait a certain amount of time for friends or family to come forward to make arrangements and that never happened,” says David McComb, president of the local funeral home. He stepped-up to provide a proper ceremony and burial for Beavers.

Strangers attending the funeral service for unclaimed veteran James Beavers bow their heads during a prayer. Nearly 1,200 veterans and community members attended the memorial and funeral services on Dec. 17, 2015.“Even neighbors didn’t know much about him. He led a very private life. We don’t even have a photo of him.” McComb explained.

According to military records, Beavers enlisted as a payroll clerk in 1963. Orphaned at birth and originally from Charleston, West Virginia, he served majority of his military career in Berlin, Germany, during a heightened period of the Cold War.

Beavers was honorably discharged from the military in 1966 but spent another three years serving in the Reserves. He eventually settled in Marion, Indiana.

Local veteran-related organizations, current service members, city and state law enforcement officials, and even a veteran from Oklahoma came to honor a man who never married or had children.

She and her husband Jeff felt compelled to attend the funeral when they read Beavers had no friends or family.

“My father just passed away in November,” said Keeling as she brushed a tear away from her cheek. “He was a World War two veteran. He would have wanted to be here so I came for him too.”

Her husband said he never had the chance to serve in the military, but would have been a Vietnam War-era veteran. He and Beavers are close in age, a fact that hit home for the Keelings.

“I don’t think it matters if you’re a new or old veteran. We need to get behind our military. I don’t care what age; we need to show we care.” he said as he and his wife braced one another against the cold wind at the burial site, with an American Flag in hand.

In a simple, intimate Roman Catholic service, hundreds surrounded Beavers’ burial site as an Army chaplain and local friar officiated. As Friar David Meinzen gave final thoughts, prayers and blessings, he reminded those in attendance that James came back home from military service during uncertain times.

“Maybe he carried around old wounds. A lot of those ghosts stay with you,” said retired Air Force master sergeant and local resident Jimmy Urban. A Vietnam War-era and Gulf War veteran, Urban pondered what Beavers’ military experience may have been like.

“Maybe he lost touch with old friends. Maybe he carried around a lot of pain and hurt from life.” Urban added. “All we want is the respect of the American people. He shouldn’t have died alone like this. He deserved more respect than that.”