A Biker In California Jumped 4 Lanes Of Traffic And Filmed It. Enjoy

The California Highway Patrol would really like it if motorcyclists would refrain from pulling off daring Evel Knievel-esque jumps like... 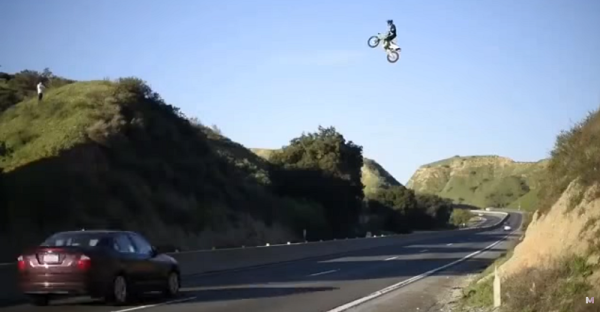 The California Highway Patrol would really like it if motorcyclists would refrain from pulling off daring Evel Knievel-esque jumps like this:

It’s not that the highway patrol (or anyone with eyes) doesn’t recognize how majestic, thrilling and amazing that feat is. The concern probably stems from the fact that revving up your dirtbike and launching 100 feet into the air over four lanes of traffic on the freeway leaves a lot of room for mistakes, and you know, unrecoverable injury.

Related: This Hoverbike Is The Stuff Star Wars Fans Dream Of »

But who cares? It looks so damn cool. A video of the stunt was posted to the Instagram account of 24-year-old motocross biker Kyle Katsandris on March 3, and an image showing a biker jumping over the freeway was posted to the same account the day before. According Los Angeles Times, the stunt took place over the State Route 60 freeway in Riverside County, California.

The video is shot from multiple angles, including an aerial shot which appears to be from a drone, and shows people creating a dirt ramp from which the unnamed daredevil launches himself.

It’s unclear who the biker is, and while most signs point to Katsandris, no one could prove the rider's identity, largely because he survived the stunt without a fall. As a sheriff’s deputy in Riverside County told the LA Times: “If we are looking into something, we need a victim. We don’t have a victim.”

Left with no one to bust, local law enforcement exercised its few recourses for preventing future stunts: They asked really nicely that people not jump highways anymore, and then they blocked the ramp with tree trunks and boulders.