Veterans Have The Most To Lose By Not Voting

This is not an endorsement for any political candidate. Rather, this is a call to arms — to vote! —... 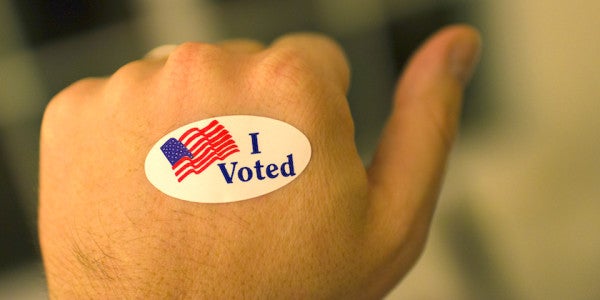 This is not an endorsement for any political candidate. Rather, this is a call to arms — to vote! — for all veterans and active military personnel. Your vote in the 2016 presidential election is more important than ever, because if we veterans voice ourselves in the full-throttled manner to which we are accustomed, our votes will be a deciding factor, regardless of which way it swings.

So, if you are a veteran reading this and you wonder why you haven’t gotten a raise that matches inflation in years and hasn’t busted over 2% since 2010, vote. If you are frustrated with the Veterans Affairs’ bureaucratic nature, vote. If you wonder why you have to get your subordinates set up on Family Subsistence Supplemental Allowances (food stamps) because they don’t make enough money to take care of their family, vote. If you have watched your brothers and sisters cut from the military through “right-sizing” while at the same time wondering why so many DoD civilians keep their jobs, vote. If you can’t understand how the legislative and executive branch each year try to cut the promised benefits you earned, VOTE! I can go on and on about the things we all see and quietly bitch about in our sections. But the tool you have at your disposal, the arms if you will, is to vote. It has, can, and will matter.

In the 2012 presidential election, the VA estimated 30% of veterans didn’t vote. While I understand voting is deeply personal and some choose to express themselves by not voting, I write to argue this is the wrong tack. My experience in the military has shown me that more often than not, inaction leads to unintended, often dangerous consequences. Choosing action, on the other hand, promotes discussion, critique, and a decision — critical to executing any military operation. If voting is a military operation, the mission can’t be accomplished by sitting behind the line of departure.

President Obama won the 2012 election with roughly 65 million votes. The VA estimates (because the VA doesn’t really know anything for sure) that there are about 22 million veterans in this country. I have failed math classes on multiple levels (a point I am kind of proud of), but even I can see that the numbers don’t lie — we are a class of individuals that can make a difference in this country.

We are all fond of saying that your service to the nation doesn’t end when the uniform comes off or when you gome home for the night. We are proud as military members to say it is 24/7. Voting is a continuation of that. So execute.