VA Dentist May Have Infected Hundreds Of Veterans With HIV, Hepatitis

Nearly 600 veterans learned this week that they could have hepatitis B, hepatitis C or HIV because a Department of... 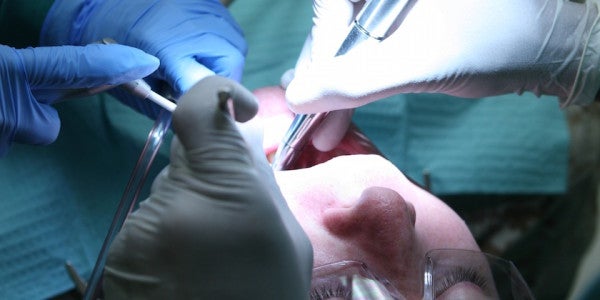 Nearly 600 veterans learned this week that they could have hepatitis B, hepatitis C or HIV because a Department of Veterans Affairs dentist did not correctly disinfect his equipment over a one-year period, according to a VA statement.

The Tomah VA Medical Center in Wisconsin sent letters to 592 veterans Tuesday informing them of the possible infections, including the virus that causes AIDS. The VA is offering free screenings, and those who test positive will receive free VA treatment.

The VA said risk of infection was low, but it was contacting all veterans who might have been exposed “out of an abundance of caution.” As of Thursday, there was not a confirmed case of a veteran contracting an infection from the unsterilized equipment.

The dentist is no longer seeing patients and was reassigned to administrative duties. In a statement, the VA said actions were pending to “ensure that those responsible for this serious breach of patient trust are held accountable.”

Related: 9 Damning Details From The Inspector General’s Report About The VA Scandal »

“Failure to follow established infection control procedures is not acceptable, and we take the safety of our patients seriously,” Victoria Brahm, director of the Tomah VA hospital, said in a written statement. “We are deeply sorry for the concern this has caused veterans and their families.”

Last year, the Tomah VA came under fire for overprescribing opioids, with some dubbing the hospital “Candyland.” An inspector general’s report faulted the hospital for the accidental overdose death of a Marine Corps veteran.

“We have clear evidence that we are moving forward,” Brahm told reporters at a news conference earlier this week. “There are pockets where improvements still need to occur, I’ll be really honest.”

Rep. Jeff Miller, R-Fla., responded to the news Thursday afternoon by saying it was an egregious instance of “botched care.”

Miller is the chairman of the House Veterans’ Affairs Committee. He helped to draft the $10 billion Veterans Access, Choice and Accountability Act of 2014 in response to the VA wait-time scandal, and President-elect Donald Trump said during his campaign he was considering Miller for VA Secretary.

In a statement Thursday, Miller criticized the department for not holding its employees accountable.

He also plugged a bill he sponsored and pushed through the House earlier this year that would make it easier for the VA to discipline or fire poor-performing employees. The bill has not been taken up in the Senate.