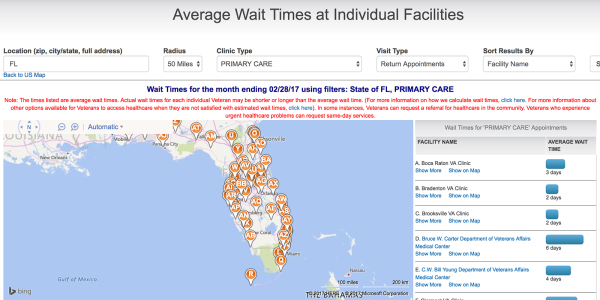 For several months, VA has been developing and testing the website — accesstocare.va.gov — and soliciting input from advocates at some of the U.S.’s largest veterans service organizations.

“It’s a real effort to have VA compete with private sector providers,” Sherman Gillums Jr., executive director of Paralyzed Veterans of America, one of the advocates who gave the VA feedback on the site before its launch, told T&P.;

On the site, vets can choose from one of four searchable options to see appointment and walk-in wait times; other vets’ satisfaction with a medical facility; limited comparisons of a VA facility with local private health providers; and general data about VA’s overall national track record:

Medical facilities can be searched on a Bing-based map and clicked to view their data:

The site’s launch was reported overnight by USA Today, in an interview with VA Secretary David Shulkin, who said the site has full data for fewer than two dozen facilities right now, but more will be added over time:

Shulkin, the only holdover from the Obama administration in Trump’s Cabinet, told USA TODAY that he believes transparency is a critical step toward fixing the beleaguered VA, something he said he conveyed to Trump.

“He doesn’t understand why people are waiting this long, and he wants to fix it. My answer to him is, the way that you fix this is not by internally motivating people to fix it — you actually need the external environment, people looking, saying I don’t understand why it’s 45 days,” he said.

In its April 3 report revealing that the site would be rolled out soon, Task & Purpose reported that it was just one of several upcoming “accountability” reforms from the VA and Shulkin, including new programs to encourage workplace innovation and introduce private-sector-style efficiencies to the department’s workforce.

The proposed ratings site — especially the comparisons between VA and private facilities — had been controversial. Past VA officials worried that such public statistics could be embarrassing or demoralizing to parts of the department’s medical system, and some critics have told T&P; that public ratings raise the spectre of privatization of vets’ care.

But most vets who have spoken with T&P; thought the public databases could only help improve veterans’ care.

“The VA secretary expects there to be bad news, and he embraces it — which is commendable,” Gillums said. “You can’t be allergic to bad news if you want positive change.”