In November 1862, in the wake of the Union victory at Antietam, President Lincoln fired his general-in-chief General George B.... 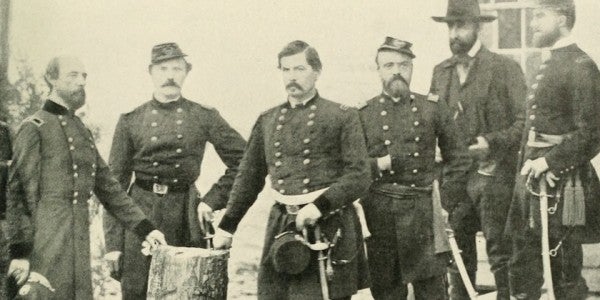 In November 1862, in the wake of the Union victory at Antietam, President Lincoln fired his general-in-chief General George B. McClellan, for failing to pursue Robert E. Lee’s defeated (and much smaller) Army of Northern Virginia. Fifty-seven years before, in 1805, the Emperor of Austria Francis II fired, and then imprisoned for two years, “the unfortunate General Mack” whose epic blunders at the Battle of Ulm precipitated the surrender of 25,000 Austrian troops to Napoleon.

Neither the President nor the Emperor possessed military training or expertise, and each had largely trusted in his military high command to manage its own affairs. Yet each was sufficiently confident in his intuitive grasp of military strategy — what it was and what it demanded–to recognize incompetence when it stared him in the face.

Even for non-experts, it is possible to assign blame for big strategic blunders like McClellan’s and Mack’s. The causes were fairly clear and rectified with relative ease. But narrow defeats and protracted stalemates, by contrast, make answering some basic questions of strategy more awkward: Could what went wrong possibly have gone right? If so, who’s responsible? In narrow defeats, the question thus becomes: Who, if anyone, is responsible for this?

It’s no accident that in the world of strategy we look for someone to blame when the going gets tough. Most readers of the Long March probably know that the word “strategy” originated with the classical Greek word for military general, strategos. While for us, “strategy” tends to denote a disembodied overarching plan, for the ancients it referred unequivocally to the ranking military commander on the ground, the one responsible for the campaign’s success or failure. As a result, for the ancients, evaluating strategic success or failure always entailed retrospectively evaluating the judgement of the strategos to determine whether he could reasonably be expected to have judged and performed better.

For instance, after military defeats, the ancient Athenians held legislative assemblies to determine whether the strategoi involved should be held responsible, and if so, how they should be punished. Sometimes, strategoi found guilty were given a cocktail of hemlock à la Socrates; others were thrown into a pit and left to die.

Arguably the winningest Athenian strategos, Alcibiades (450–404 B.C.E.), was dismissed by the Athenian legislature in the waning days of the Peloponnesian War, after his defeat at Notium in 406 B.C.E by the Spartans under Lysander. Alcibiades, however, was not even present at the battle, having briefly delegated authority to his aide de camp, Antiochus, who promptly launched an attack on the Spartans. Alcibiades had expressly forbidden such an attack.

Whether to hold Alcibiades accountable thus presented a genuine puzzle for the Athenians, who wanted to punish someone. But, according to Xenophon in his History of Greece, the Hellenica, they also recognized Alcibiades to be “the ablest of the citizens.” Was Alcibiades’ brief delegation, which precipitated the defeat, a dereliction of duty, the consequences of which an abler strategos would have foreseen? Or just a routine procedure gone horribly and unforeseeably awry?

In the history of strategy, two schools of thought have emerged to explain this paradox with which the Athenians grappled. They still lie at the very heart of strategy, today.

One school, which I call strategic pessimism, holds that even the ablest strategist can fully exhaust his or her capacities, by taking every precaution, contemplating every contingency, and yet still fall prey to some fluke of fortune. There is, according to this view, a radical disjunction or an unbridgeable gulf between human virtue, on the one hand, and the deep necessities of the cosmos, on the other. No absolute progress in knowledge of these necessities is possible. So the world remains radically contingent for us. Blame ultimately becomes meaningless.

To the pessimistic school belong the pre-Enlightenment political philosophers, as well as the Abrahamic religions. Thus, in Machiavelli’s words, only fifty percent of Fortuna is conquerable; in Plato’s, even the most capable among us is nonetheless a plaything of the gods; and Ecclesiastes 9:11 echoes, “Time and chance happeneth to them all.”

At the spectrum’s other end is strategic optimism. Strategic optimism proposes that defeat always indicates error or incompetence which, in principle, could have been mitigated through even shrewder precaution and more exhaustive contemplation of contingencies. Thus, the great Enlightenment philosopher Francois Viete – as well as American President Lyndon Johnson, long after – posited that “there are no problems that cannot be solved” and no error for which some strategist cannot be reasonably blamed.

It is crucial to recognize that, in the hardest of cases, both of these extremes are non-falsifiable. One can always posit that a better alternative was knowable; or, from the other extreme, that no better alternative could possibly have been known. One can never scientifically demonstrate that a tough call made in the heat of battle admitted of a superior alternative, which the strategist in question should have seen and chosen. If we could, our analytical precision would likely render strategy outmoded and unnecessary. (As an aside, that is the object of the current wave of obsession with artificial intelligence: The world of human choice and judgment will be replaced by error-free mathematical models. Good luck with that.)

But despite our Enlightenment sophistication and lofty goals for AI, we find ourselves in the same fundamental position as the Athenian legislature, longing to assign blame, looking to correct the problem, but unsure whether we ought or whether we can. Whether on the battlefield, in the boardroom, or in the public square, we are still left with relative comparisons. There are better strategists and worse strategists. History is (as Lincoln confirms) at least capable of providing us with a few examples.

Charles U. Zug is a doctoral student at the University of Texas, Austin and a fellow at the Clements Center for National Security. His research focuses on the uses and abuses of demagoguery in American politics.