The three California men who famously thwarted a terror attack on a Paris-bound train in 2015 will play themselves in... 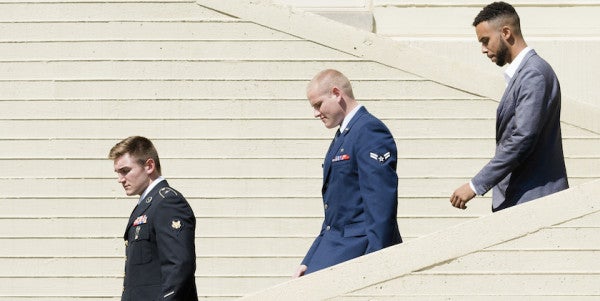 The three California men who famously thwarted a terror attack on a Paris-bound train in 2015 will play themselves in an upcoming film directed by Clint Eastwood about the incident, the Associated Press reports.

The 15:17 to Paris, which began production this week, marks the acting debuts of Anthony Sadler, Alex Skarlatos, and Spencer Stone, who grew up together in the Sacramento area. The film will tell their story from childhood to the evening they helped subdue a heavily armed Moroccan man who open fired inside a train in France, garnering international recognition as heroes credited with saving countless lives amid a wave of spectacular Islamist terrorist attacks that rocked Europe.

All three men were awarded the Legion of Honor, the highest French order of merit, for their actions. Stone, who was a senior airman in the U.S. Air Force at the time, also received the Airman’s Medal, as well as the Purple Heart for stab wounds he sustained during the altercation with the gunman, and a rare double-promotion to staff sergeant. Skarlatos, an Oregon Army National Guardsman and Afghan War veteran, received the Soldier’s Medal, the U.S. Army’s highest award for peacetime valor, from President Barack Obama, while Sadler, a civilian, was bestowed the Secretary of Defense Medal for Valor.

Eastwood made the decision to cast the trio at the last minute, despite a wide-ranging search that yielded plenty of options for actors to play them, according to Variety. The film is based on a book of the same name, which the men co-wrote, and continues a trend for Eastwood, who recently directed two other films based on the true stories of American pop heroes: American Sniper, about venerated Navy SEAL Chris Kyle,and Sully, about celebrated pilot Chesley Sullenberger. However, both Kyle and Sullenberger were played by famous actors.

Sadler, Skarlatos, and Stone were vacationing in Europe at the time of the attack on August 21, 2015. Stone was reportedly the first person to tackle Ayoub El Khazzani, who has ties to radical Islam, authorities say. Khazzani was armed with an AK-47, a pistol, and a box cutter, which he used to slash Stone in the ensuing struggle. As the trio fought to subdue Khazzani, Skarlatos beat him unconscious with the butt of his own rifle. Remarkably, no one on the train was killed.

Stone would later appear in headlines again after he was brutally stabbed by a stranger outside a bar in Sacramento, while Skarlatos appeared as a contestant on Dancing With the Stars, which appears to be the closest thing any of the three has ever done to acting. As the Associated Press notes, Warner Bros., the studio producing The 15:17 to Paris, did not elaborate on what prompted Eastwood to cast the trio. Other actors have been tapped to play younger versions of them.

Correction: A previous version of this article stated that Spencer Stone was a staff sergeant in the U.S. Air Force at the time of the thwarted terror attack. He was, in fact, a senior airman, and was subsequently promoted to staff sergeant for his heroics, according to Air Force Times. (7/12/2017, 2:01pm EST)