Chester Bennington, the co-frontman of rock band Linkin Park, was found dead of an apparent suicide in his Palos Verdes... 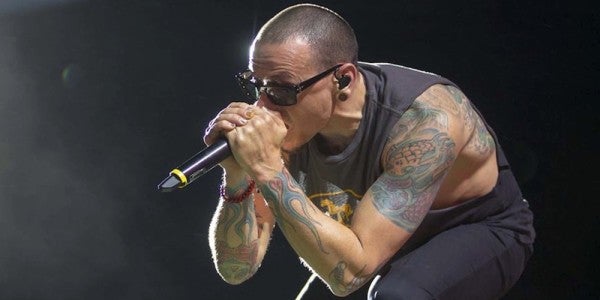 Chester Bennington, the co-frontman of rock band Linkin Park, was found dead of an apparent suicide in his Palos Verdes Estates home on July 20, the Los Angeles County coroner’s office announced. The singer, known for his intense and emotional lyrics and performances, was 41.

Fellow Linkin Park vocalist Mike Shinoda confirmed the news on Twitter: “Shocked and heartbroken, but it's true,” he wrote.”An official statement will come out as soon as we have one.”

Although Linkin Park first drove themselves into the public consciousness with debut album Hybrid Theory’s unique blend of metal, alternative rock, and hip-hop, it was Bennington’s alternating screaming and melodic vocals on beloved hits like One Step Closer and In The End that defined the Agoura Hills, California band’s unique identity in a crowded alternative rock scene.

That unique identity resonated with a generation of teenagers gearing up to go to war.

“Most of the vets of I served with, people who are of the age of watching the towers fall in high school, listen to Linkin Park,” Kris Goldsmith, an Iraq War veteran and assistant director of policy for Vietnam Veterans of America, told Task & Purpose. “It was part of the end of our childhood. It’s the music we listened to in Iraq. A lot of folks who went overseas early in the war have memories of listening to Linkin Park while out on patrol or getting ready for patrol.”

Bennington and Linkin Park didn’t just make an impact on post-9/11 American culture with their intense, impassioned lyrics and unusual sonic flavor, but with their direct service to the armed forces as well. In 2014, the group teamed up with Iraq and Afghanistan Veterans of America to use its Carnivores tour to call public attention to the suicide crisis that dramatically affects American service members and veterans.

“It is an honor to meet with you guys, the men and women of the armed forces, who protect our freedom every day,” Bennington told fans during a performance in Denver in September of that year. “The greatest country in the world, and it's because of men and women who go out and risk their lives for all of us … no matter who we are or what we believe in.”

The group displayed 22 American flags to symbolize the estimated number of U.S. veterans who take their own lives on a daily basis, Military Times reports. The group also debuted a new music video for their song Wastelands featuring a montage of personal photos taken by service members and veterans.

Goldsmith, who accompanied Linkin Park for a short stint of the Carnivores tour, didn’t have to hang with the band backstage for the group to make an impression. “The fact that they invited vets organizations to come out and raise awareness shows that they cared,” he told Task & Purpose.

In an interview with Military Times the following October, Shinoda explained that the band had always felt “a special bond with the military,” a tie that grew out of observing service members deployed downrange in Iraq and Afghanistan using Linkin Park’s catalog “as the soundtrack to their experiences.”

“Aside from the music and lyrics, maybe the connection has something to do with the fact that this isn't about politics,” Shinoda said. “Our effort to help soldiers is a humanitarian one, about people. I hope the veterans feel our deep gratitude for their service and hope our efforts help give them the support they need to re-establish their lives.”

For many veterans, news of Bennington’s reported suicide may serve as a reminder that this support doesn’t just flow one way.

“What today’s news reminds us is that suicide is not just a veteran problem … It’s an American problem,” Goldsmith told Task & Purpose. “Everyone who attempts or dies by suicide has an overwhelming feeling of hopelessness, not just veterans. The US has to come to terms with the fact that we don’t have a very good way of thinking about suicide. We need to help end that cycle.”