Dressed in a suit adorned with military medals and awards, Ken Sturdy, a 97-year-old World War II veteran, sat in... 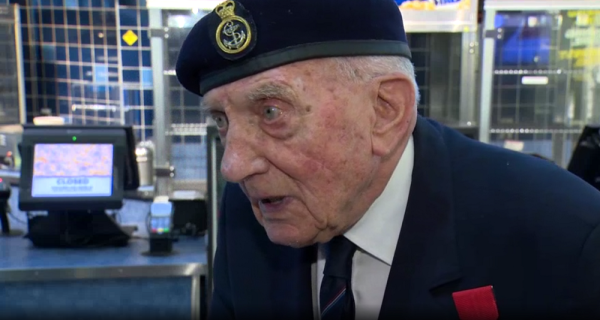 Dressed in a suit adorned with military medals and awards, Ken Sturdy, a 97-year-old World War II veteran, sat in a crowded movie theater in Calgary, Alberta, on July 21 and watched Dunkirk — a war drama about a real-life battle he survived.

The harrowing film, by Inception and The Dark Knight director Christopher Nolan, centers on a desperate, civilian-aided plan to evacuate hundreds of thousands of Allied troops across the English Channel after they were cut off and trapped by advancing Germans in the French city of Dunkirk in 1940. Sturdy, a 20-year-old signalman with the Royal Navy at the time, helped evacuate soldiers stranded on the beach, where they were strafed by German aircraft.

“I had the privilege of seeing that film tonight and I am saddened by it because of what happened on that beach,” Sturdy told Calgary Global News. “I never thought I would see that again. It was just like I was there again.”

Over the course of nine days, more than 300,000 British soldiers were rescued by the Royal Navy and a fleet of civilian and merchant vessels, dubbed “little ships.” However, thousands of British soldiers were captured or killed in the battle, one of the most shocking opening salvos of World War II.

Related: A Battle Of Dunkirk Veteran Gives The New Film An Emotional Review »

Sturdy, who lost friends at Dunkirk, said he hopes the film highlights the tragic nature of war for viewers.

“Tonight I cried because it’s never the end,” Sturdy said. “It won’t happen. We, the human species, are so intelligent, and we do such astonishing things. We can fly to the moon but we still do stupid things. So when I see the film tonight, I see it with a certain kind of sadness. Because what happened back then in 1940, it’s not the end.”

“Don’t just go to the movie for entertainment,” Sturdy added. “Think about it. And when you become adults, keep thinking.”