Just A Normal Day In The Hangar, Then Bryan Cranston Of ‘Breaking Bad’ Shows Up

Actor and director Bryan Cranston, known for his award-winning turn on AMC’s intense crime drama Breaking Bad, made a surprise... 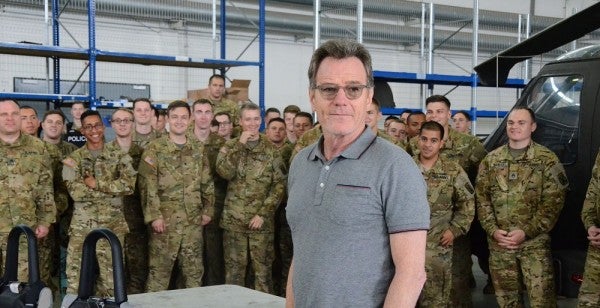 Actor and director Bryan Cranston, known for his award-winning turn on AMC’s intense crime drama Breaking Bad, made a surprise trip to Germany to visit soldiers stationed at U.S. Army Garrison Ansbach on July 24, and he did so in style.

While the visit was part of a tour of U.S. military installations across Europe, the 61-year-old award-winning actor chose to forgo the dog-and-pony show that usually accompanies celebrity appearances when he dropped by the base, according to an Army statement about Cranston’s visit.

“I think if you're fortunate enough to have a busy career, you can sometimes find yourself being insulated from the outside world — from people who live in different parts of the world and have different occupations,” Cranston said, before adding that “the factor of meeting military personnel who are doing heroic things, and I'm truly grateful for their service.”

We have to commend Cranston from slipping in without the hullabaloo of a highly publicized celebrity visit. After all, what’s more natural than looking up from turning wrenches in a hangar to see fucking Heisenberg climbing into the cockpit of an Apache helicopter?

I'm taking this for a spin, okay?U.S. Army photo

Cranston, who has appeared in more than 50 films and numerous TV shows and films since the 1980’s, from Saving Private Ryan, to playing Hal in Malcolm In The Middle, is perhaps best known for his role as Breaking Bad’s Walter White, an unassuming high school chemistry teacher whose cancer diagnosis sends him careening on towards a future as the meth-peddling drug kingpin Heisenberg.

Related: 2 Fans Edited All Of ‘Breaking Bad’ Into A Movie And It’s Surprisingly Good »

Cranston, who visited the base with his wife, had a chance to meet with individual service members, including three female soldiers who discussed the challenges they’ve faced as women in uniform.

“And all three said there’s some tough times to it, but they’re managing, and they feel at times that they have to be stronger to prove themselves, but they’re grateful for the opportunity,” Cranston said in a recent Q&A; interview with the Ansbach Hometown Herald. “They’re learning a lot. They’re developing a sense of independence and confidence, which is huge. They have the security of the job, knowing that they have that — health care, a future — so, they were, by and large, very positive about the whole situation.”