Steve Carell is a grieving father and Vietnam War veteran who reunites with his former squadmates, played by Bryan Cranston... 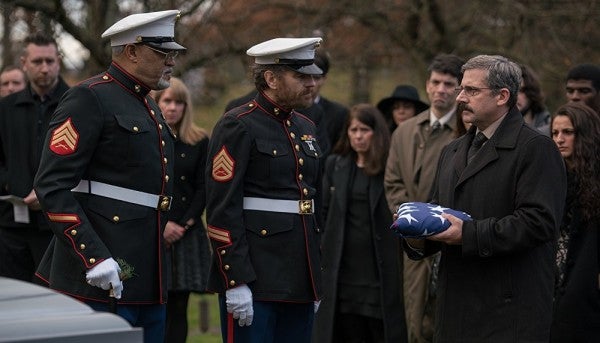 Steve Carell is a grieving father and Vietnam War veteran who reunites with his former squadmates, played by Bryan Cranston and Laurence Fishburne, to transport his son’s body back home from Dover in Last Flag Flying, an upcoming star-studded drama.

In a new trailer for the Amazon Films production, by indie director Richard Linklater, Fishburne and Cranston play Marine Corps vets who reconnect with Larry 'Doc' Shepherd, their former Navy corpsman, played by Carell. After his son was killed in the opening days of the invasion of Iraq, Shepherd asks his two friends to help him transport the remains, and together they set off on a cross-country odyssey to lay his son to rest.

Cranston’s former Marine is still partying hard and throwing off belligerence that never quite left him when he left the Corps; Fishburne steps in as a former brawler and drinker-turned-reverend.

Last Flag Flying is actually a sequel to the 1970 Hal Ashby comedy-drama The Last Detail starring Jack Nicholson, in which two petty officers are tasked with escorting a young sailor to prison, but first decide to take him on one final bender. Both films are adaptations of novels by Darryl Ponicsan, who also co-wrote the screenplay with Linklater, according to Indie Wire.

The film is set to premiere at the New York Film Festival in September before hitting theaters nationwide on Nov. 17.