We already knew that Christopher Nolan’s “Dunkirk” was going to be one hell of a movie. The 2016 trailer for... 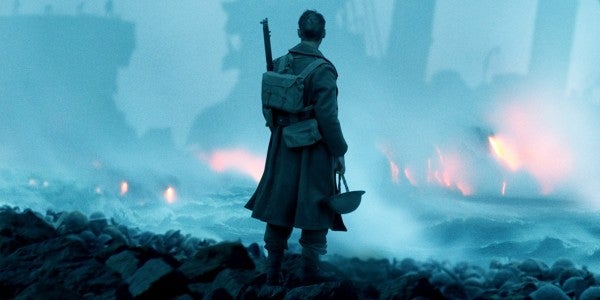 We already knew that Christopher Nolan’s “Dunkirk” was going to be one hell of a movie. The 2016 trailer for the upcoming war drama, which stars Tom Hardy and follows three soldiers through one week surrounding the titular Battle of Dunkirk in 1940, showed all the signs of the gritty action that made past Nolan projects like The Dark Knight Trilogy and Inception such epic cinematic experiences. Now, we have proof that ‘Dunkirk’ may just be one of the finest World War II movies since “Saving Private Ryan.”

Speaking Wednesday at the annual CinemaCon convention for theater owners in Las Vegas, a fiery Nolan unveiled footage for a “stunned” audience, and reports indicate that the screening was met “with the event's biggest standing ovation yet” — which is saying something, given the role of the festival in influencing which Hollywood blockbusters actually dominate the silver screen upon release.

“As the lights came up, the theater owners gave one of the loudest ovations heard during the four-day festival,” USA Today reports.

Here’s what audience-goers saw, per the Hollywood Reporter:

The footage shown focuses on multiple characters in the same moment in time. There are two young soldiers attempting to get an injured soldier across a bridge crowded with soldiers while, in the sky, Hardy’s character, a fighter pilot, is in battle. [Mark] Rylance’s character is taking out a boat to the sea below, where a battleship packed with soldiers floats. Over it all is an intense ticking sound, creating tension that promises to lead to an explosive moment.

“I wanted to tell the story in the most visceral way possible,” Nolan said. “I wanted to take that audience and put them on the beach.”

Nolan wasn’t just motivated by his artistic instincts to create a great piece of cinema, but by the story of the Battle of Dunkirk itself — in which British, Belgian, French and Canadian troops, surrounded and outnumbered by German forces, held their ground long enough allow more than 300,000 soldiers to evacuate Dunkirk Harbor, France, and head to safety across the English Channel.

“At its heart, it’s a survival story,” Nolan said. “The enemy is closing in on the British on this beach with no escape. I wanted to put the audience in the story.”

Based on the reactions to his footage, it sounds like he succeeded.