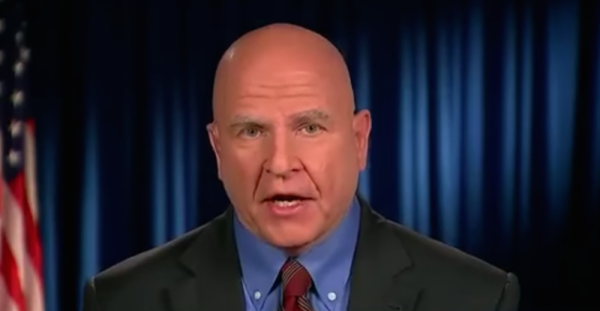 “Russia should ask themselves, 'What are we doing here?'” McMaster told Wallace. “'Why are we supporting this murderous regime that is committing mass-murder of its own population and using the most heinous weapons available?'”

Last week, the U.S. launched 59 Tomahawk cruise missiles from two warships at a Syrian airbase from which forces loyal to the Assad government allegedly launched an April 4 chemical attack that left 87 Syrian civilians dead. “No child of God should ever suffer such horror,” President Trump said in a speech announcing the strikes late on April 6.

Russia, which has backed the Assad regime in the past, called the U.S. military action an infringement on Syrian sovereignty, took steps to disengage with U.S. forces in the region, and suggested it would help beef up Syrian air defenses.

In his interview with Wallace, McMaster suggested that the U.S. might take further military action against Syria, but attempted to assure viewers that this particular attack was intended solely to prevent any future chemical attacks, not to destabilize the Assad regime.

However, McMaster added that the U.S. is exploring a multinational coalition a to remove Assad from power.

Russia condemned U.S. national security officials’ decision to intervene in the country, suggesting that the chemical attack was merely an accident that resulted from an airstrike hitting a rebel-held cache or chemical weapons factory.

Russian officials are also threatening to kill a line of communications that the U.S. and Russian militaries used to notify each other about air operations in Syria, according the New York Times.

“Right now, I think everyone in the world sees Russia as part of the problem,” McMaster said. “It's very difficult to understand how a political solution could result from the continuation of the Assad regime.”

Watch the complete interview below: