Two days ago, as Puerto Rico’s post-hurricane crisis fought for news headlines with sports protests and Beltway drama, a titter... 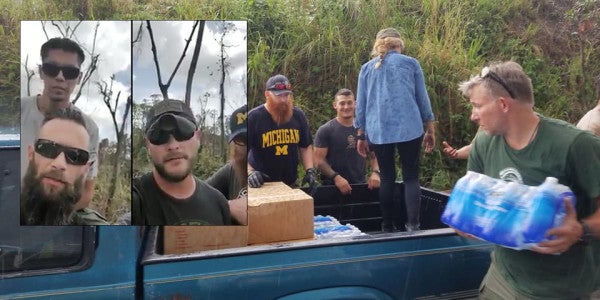 Two days ago, as Puerto Rico’s post-hurricane crisis fought for news headlines with sports protests and Beltway drama, a titter went through veterans’ communities online: Who were those big, aw-shucks-looking ex-military operators giving heart-rending updates on the ground situation in Puerto Rico?

1) This is a former Staff Sergeant and Calvary Scout. He is in Puerto Rico. He's telling you the truth. FEMA and POTUS are lying to us. pic.twitter.com/G4u617KW2P

Nearly three weeks since Hurricane Maria hit the U.S. island, it remains largely without power or infrastructure, and largely unseen by residents of the continental U.S. Which made this stout group of U.S. military veterans and their video updates so compellingly viral this weekend, as Former Army cavalry scout Jason Maddy and his colleagues reported from Anasco, on the western side of the island, on how flooding and landslides had reduced residents’ already-limited access to food and water. By this morning, Maddy had found himself on CNN, describing his “Anasco Expendables” — what some local residents have taken to calling the ad hoc ex-military group of a dozen volunteer relief workers — and why they were sounding the alarm about supply problems on the ground.

“Anasco’s not a big town, but there’s something like 40,000 people here, and the big issue is that we’re getting about two pallets of water out to the people in the mountains, and that’s it,” Chris Davis, a fellow Army vet, said in one of the group’s fast-spreading Facebook videos Oct. 7.

Who were these guys? Why'd they decide to go? How’d they manage to do it? Buoyed by good news stories about volunteers who’d rebuilt New Orleans after Katrina or enlisted themselves in a “Cajun Navy” after Harvey, we wondered if these vets were the latest in a line of refreshing good-news stories about how Americans help Americans in crisis. Or if they were just click-hungry Youtubers or Kickstarters. Or a little of both.

‘We were able to move a bit faster than FEMA’

It turns out Maddy has dropped out of college classes to do this. He’d previously volunteered with Davis in the aftermath of Hurricanes Irma and Harvey — moves that quickly bankrupted Davis’ burgeoning tactical gear business, whose website they now use to take donations to purchase the supplies they’re distributing in western Puerto Rico. They’ve raised less than $10,000 and spent much more than that on their work.

“The purpose of those donations is to keep our wheels turning,” Davis said

“People in town either don’t have money, or access to it, because the ATMs are down,” Maddy said. “We’ll go to the store, we’ll buy pedialyte, water, food, and give it the folks waiting in line for the ATM.

“We just use our cards until they quit working,” he added.

But the Anasco Expendables aren’t here for fundraising. They have a certain set of skills, and they see a need for those skills. “Mainly, this is just a group of current/former that have resources and friends that are/were trained in doing logistical missions and search and rescue missions,” Victoria Almond, one of Maddy’s volunteer teammates and a Marine Corps Reserve radio operator, told Task & Purpose in an exclusive interview Oct. 11.

“We learned through hurricane Harvey that we were able to move a bit faster than FEMA and other government organizations because we became a ‘smaller task force,’ in a sense,” she said.

“We haven’t seen a lot of outside aid,” Maddy told T&P; in an interview. “We saw two from Red Cross and one FEMA person, and that FEMA person went back to San Juan and she tried to release the supplies to us, but she was only able to get two pallets of food and two pallets of water.”

Almond, Maddy, and Davis spoke exclusively with T&P; Monday and Tuesday about how they had geared up and mounted out in hopes of improving the lives of fellow Americans who’d been caught in Maria’s wake. Many had been volunteers in Texas, following Hurricane Harvey, and in the Florida Keys after Hurricane Irma walloped the region last month, assisting with logistics and supplies.

“We have a plan, we have contingencies, we plan everything out, we go right back to the day, like how we used to plan operations,” Davis said.

For the group, moving on to Puerto Rico after Maria was a no-brainer.

“Some of us have family in PR, my cousin lives there, and some of my other team members have grandparents and such there,” Almond said.

Getting to PR was easy. Establishing communications, less so. “The first couple days, we had little to no cellular service,” Almond said.

The team quickly headed west to the city of Anasco, which was devastated. “As far as the mountain goes, there’s trees down everywhere,” Maddy said.

“It looks like a nuclear bomb went off,” chimed in Davis.

“Yeah, it really does,” agreed Maddy.

But they did have their family connections. “So we immediately went to the people and asked them what they needed,” Almond said. “From there, we ended up talking to the mayors of each city” and a host of federal officials “to help get supplies to the West end of Puerto Rico to schools, house to house in neighborhoods in Las Marias.”

According to a website maintained by the office of Puerto Rico’s Gov. Ricardo Rosselló — the statistics were previously available on the main FEMA page, but were taken down, then re-uploaded — 10% of Puerto Rico's power grid has been restored, while 64% of the island has access to drinkable water. However, on the western side of the island, where Maddy and his fellow vets are conducting their supply runs, less than half have access to drinking water.

Related: Here’s What The Military Is Doing To Help Hurricane Maria-Struck Puerto Rico And Virgin Islands »

The Anasco Expendables would seem to be a very 21st century tech solution to a timeless logistics problem. There is a food-and-water issue in Puerto Rico, but it’s not entirely a supply shortage: It’s knowing where existing supplies are needed most and how to get them there.

“Through our military training we learned that the fastest way to get aid to the people was through networking with places such as churches and schools to help set up distribution points,” Almond said. “From there, our families, friends, and other veterans and veteran organizations blasted over social media where to send the supplies so teams like mine could help escort or get the supplies where it was needed so it could then be distributed.”

‘We don't know… what the holdup is’

That works great in spurring social shares and offers of donations, and it works in pinpointing the aid — but getting the aid from A to B is still complicated by Puerto Rico’s power and infrastructure problems.

“We distributed house to house in Anasco and Las Marias to make sure the people were actually getting food and water, but most of the supplies are being held in San Juan,” Almond said. It’s “been so difficult to get the supplies to the west… we don't know why or what the holdup is. It's something over our heads as volunteers.”

In Anasco right now, each household is allotted six bottles of water and a “snack pack” per day, comprised of two cans of food — Chef Boyardee — plus rice, raisins and crackers. The supplies can be picked up at Anasco’s distribution center. But residents in more remote areas haven’t been able to leave their homes or make it into town for weeks, and have to strech that small allotment till their next run into town. That’s where the Expendables come in.

“Everyday we go into the mountains, it’s dumping rain on us,” Davis said. “Nobody else will go. Landslides are consistent up there.”

So far the team has delivered nearly 30 pallets of food and water, relying on a Jeep Wrangler — which recently suffered some severe wear and tear — plus a van or two. Though they’ve accomplished a lot in conjunction with local police, Maddy and Davis are left wondering: where’s the rest of the support?

“I know they’re trying, they are, to get to” the people in need, Maddy said of federal aid workers. “For us to be the first on the ground, to be able to take part in that and relay the information to the Army, I guess it’s pretty amazing, because we’re all a group of veterans.”

But the Expendables aren’t here just to relive glories. They’re here to help their fellow Americans, they said. “The residents in Puerto Rico are what is truly beautiful, because they are helping each other by coming together and helping us find the places that have been ‘forgotten,’ or haven't received help or supplies yet,” Almond said. “And they're taking turns feeding their own neighborhoods.”

Maddy was blown away by the reception his team has gotten from perfect strangers. “They’ve come up to offer us food and water and they have nothing,” he said. “When they saw us initially, they saw us as a sort of hope because nobody was getting to them.”

When the team has worked with Anasco’s city officials, Davis said, “They’ve told us that we give people a sense of hope, because outside people who are dedicated to helping have showed up.”

But there could — should — be more people showing up, with more supplies. The Expendables say, if their sudden media attention can be used for good, it’s to net more goods for Puerto Ricans in need; the team is regularly coming into contact with people who desperately need medical supplies, they said.

And if they can get more volunteers to distribute those goods, so much the better.

“Anyone who wants to come out to help us, we need bodies, we need more veterans,” Davis said. “All they have to do is jump on a plane to San Juan, and in San Juan they can jump a $40 flight from Mayagüez airport.

“As long they let us know they’re coming,” Maddy said, “they can come work.”

Those seeking to link up with the vets on the ground should reach out via social media, Maddy and Davis said.