How this Army veteran found meaning in emergency management

For Lorenzo Leon, coming home was almost as difficult as deploying in the first place 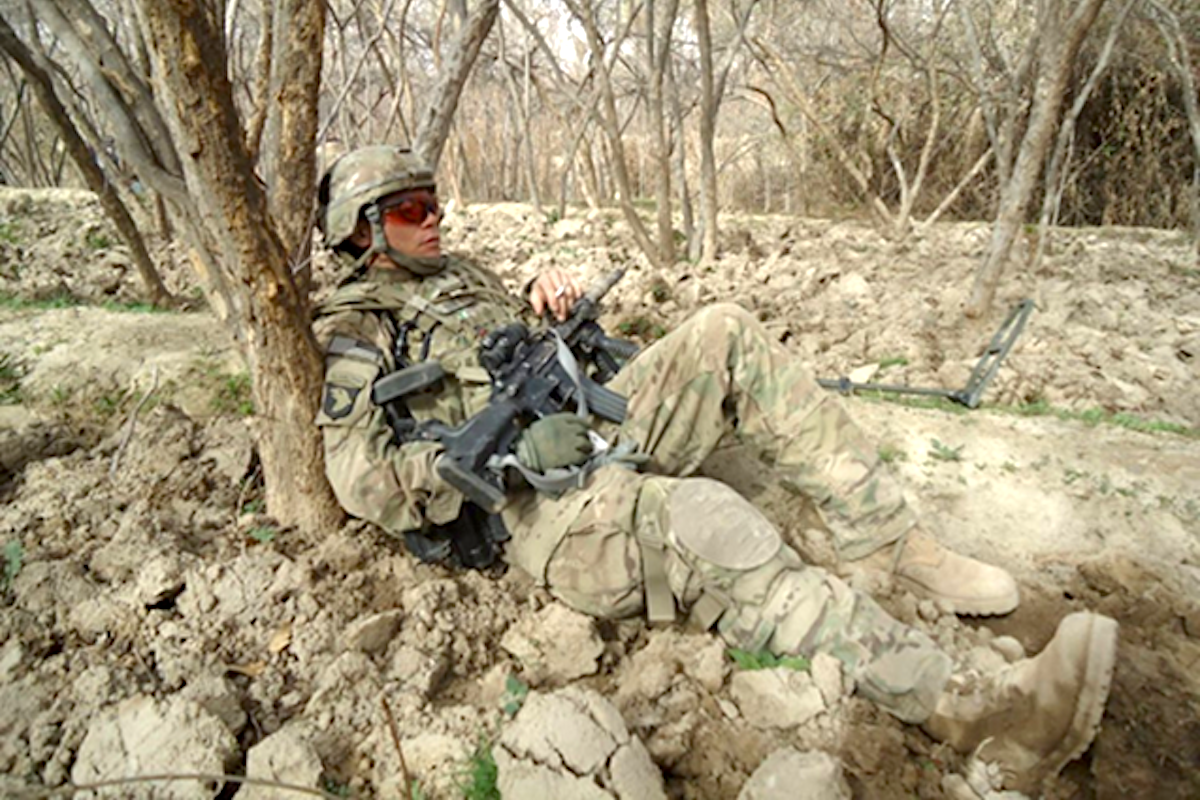 For Lorenzo Leon, coming home was almost as difficult as deploying in the first place.

After initially enlisting as a field artilleryman, Leon deployed to Afghanistan in December 2010 in the middle of President Barack Obama’s vaunted troop surge in the country. He’d spent the months before his deployment training in infantry tactics — “they took the big guns away and made us infantrymen,” he recalled in an interview — and, after landing in Kandahar Air Field in July, spent months patrolling in rural pro-Taliban communities up and down the Arghandab River Valley. For Leon, who was just 22 at the time, the deployment consisted of patrolling for IED’s, position improvement and security before eventually joining up with the 2nd Brigade Combat Team to push the Taliban out of Kandahar as part of Operation Dragon Strike.

“It was crazy, coming into an area where people hadn’t seen anyone outside their community in 25 plus years — and they didn’t welcome us with open arms,” Leon said. “They threw rocks at us, fired RPGs at us, laid IEDs for us … It was the Taliban’s capital of sorts, and getting our hands around that key terrain was very important to leadership and mission.”

Leon’s battalion patrolled the area “day in and day out,” he said: there were 28 villages out in his assigned territory, roughly 18 of which were occupied by Taliban fighters. His unit ended up building 17 combat outposts, taking on a lot of ground — and a lot of casualties.

“That was the crazy part to deal with as a young soldier,” Leon recalled. “They don’t prepare you for that kind of stuff. You train for it, but you’re not mentally prepared to start dealing with it, and on the battlefield, it’s not really the time. It’s not until you get back home do you think about these things. It’s been 10 years and I’m still trying to piece together certain days and certain months. It’s every month for me, every day, trying to remember what I was doing and what happened because for us out there, this could be my last day, the last step that I take.”

Leon was in Afghanistan for 11 months, working and fighting in some of the most grueling battles of the troop surge. But after a good homecoming to his wife and daughter in April 2011, Leon started to feel a little lost. After separating, he worked in 11 different positions through state agencies, from selling vacuum cleaners to serving as a correctional officer at a state facility.

“I was trying to find something and couldn’t find anything,” he recalled. “I was working under the table, I didn’t know what I was doing … the military didn’t teach me anything but how to fight. All I learned was the war side of things.”

It wasn’t until he was laying brick in Tennessee in 2013 that Leon’s wife applied for a dispatcher position at a National Guard facility in Nashville.

“I didn’t know anything about emergency management,” he said. “I got on base and picked up a pamphlet that said ‘Tennessee Emergency Management Agency’ on it. It talked about disaster response and emergency preparedness. I read Google and Wikipedia in the lobby 10 minutes before my interview and when I get in there, they ask me, ‘what is emergency management to you,’ which is what I had just read in the pamphlet. Apparently, I was the first person to answer that correctly.”

Leon started as an operations officer in a state emergency operations center, cutting his teeth coordinating between localities, 911 dispatch centers, and state agencies in response to large incidents — and he quickly realized that his military experience and training was a huge boon for his new line of work.

“It all comes back comes back from being a Radio Telephone Operator: listening for direct fire or call for support on the field artillery side, being able to listen and translate that information back out which is key during a fire mission,” he said. “It’s maintaining calm under chaos and the ability to communicate clearly when everything’s going crazy.”

“I loved it, and [TEMA] is where I got my feel for it,” he added. “They had a great organization there, and I started to learn as much as I could about it. If you want to get into emergency management, that’s the best position to try to get in. There are no prerequisites or qualifications: if a guy like me can get it, anybody can.”

With a new taste for emergency management, Leon kicked his post-service career into overdrive. He started taking free Federal Emergency Management Agency courses nightly, striving to knock out between three and five courses a week. Within a year, he applied for a planner position, working with exercise design and development. The new job moved him up within TEMA and into a different role in the agency’s planning section.

“That’s where I learned even more about how training and exercises tie into a good response,” Leons said. “That’s where I got a good feel for emergency management as a whole.”

In 2017, things changed when an opportunity arose for Leon to join the Virginia Department of Emergency Management (VDEM), a move that would put Leon’s family closer to his wife’s relatives in the state. Within months of starting, Leon deployed to Puerto Rico as part of an Emergency Management Assistance Compact (EMAC) A-team to coordinate state resources that were being requested to deal with the aftermath of Hurricane Maria.

“All 50 states and U.S. territories can use the compact to share resources across the emergency management community, so if Texas needs someone with my skill set, they could request me by position to go work in that state and would be covered under law, protected,” Leon explained. “Puerto Rico requested a bilingual A-team member, and I was one of two people available.”

It was in Puerto Rico where Leon says he learned to truly love emergency management.

“It was the time when I knew that I wanted to go further in my career than where I was currently,” he recalled. “It was crazy there with at least 3,000-4,000 people there working towards the same mission. That was a highlight for me.”

“A lot of the things I live by line up to things I learned in the military and how I feel about emergency management: selfless service, integrity, respect, and also being compassionate about what we’re doing,” Leon said. “I’m not at war anymore, I don’t have a weapon, I’m not there fighting the enemy … Now, when I respond to a disaster, I do so by being a shoulder to lean on while they’re in the worst time. I get gratification out of that. That’s what keeps me motivated is helping those people get back to some kind of normalcy as quickly as possible.”

Today, Leon works on the FEMA integration team, or ‘FIT,’ as Virginia’s member, assisting the commonwealth with any requests, processes, procedures, and questions to provide situational awareness to them from the federal level. During the novel coronavirus (COVID-19) pandemic, that means keeping the state apprised of any shipments of critical resources coming in from the federal government, serving as a human conduit between the commonwealth of Virginia and the federal government.

And Leon isn’t the only service member or veteran to find a future with FEMA after the end of their service: According to the agency, FEMA is developing a partnership with the National Guard to encourage the employment of drilling Guardsmen and reservists in a variety of career types and roles. In fact, FEMA employees may use military leave to attend training and deploy in support of military operations without risk of consequences or impact on their employment.

“It’s truly an honor for me to lead and work alongside the countless number of veterans who continue their service to our nation here at FEMA. To dedicate your life’s work toward service to others – whether in or out of uniform – to me, is very special,” FEMA Administrator Pete Gaynor told Task & Purpose. “As a veteran myself, it has allowed me to continue public service in a meaningful way, helping people work through and recover from what many times are the worst experiences of their lives.”

“On active duty, we provide humanitarian service to our fellow citizens stateside and also to our friends and allies abroad. Being part of the FEMA team allows that service to continue once you hang up the uniform – helping people before, during and after disasters,” he added. “At FEMA, we are always on the lookout for veterans who are interested and excited to join our team. Their leadership, experience and ability to work as part of a team are invaluable.”

Veterans looking to join FEMA’s mission are encouraged to view available job openings at https://www.usajobs.gov/Search/Results?a=HSCB&p=1 and learn more about our careers at https://www.fema.gov/careers. FEMA has a team of recruiters who are passionate about helping veterans begin a new career with our agency. These recruiters hold regular virtual recruitment events for veterans and the military community. Veterans can learn more about the hiring process and Veteran’s preference here. https://www.fema.gov/careers/position-types/veterans

There are special hiring authorities designed specifically for veterans. For consideration under the special non-competitive hiring authorities for veterans, send a resume, discharge document (DD214, Member 4), veterans preference document (SF15), and disability documents to fema-veterans@fema.dhs.gov. Please make sure you protect your identity by redacting any personally identifiable information (PII) like your social security number or any identifying information. If you are in need of reasonable accommodations when applying for a position, or going through the interview process at FEMA, please contact FEMA-Reasonable-accommodation@FEMA.dhs.gov.