Why do people still rob banks? It’s the 21st century. You can probably steal more money online with a few... 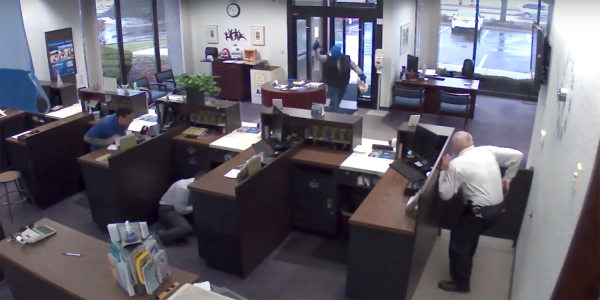 Why do people still rob banks? It’s the 21st century. You can probably steal more money online with a few lines of code, and have an easier time getting away with it.

Also, if you try to rob a bank, you run the risk of meeting a security guard like Brian Harrison.

Authorities in Illinois last week released dramatic footage, from multiple camera angles, of Harrison being one cool motherfucking cucumber last January when he killed the hell out of an armed and extremely unprepared would-be bank robber.

The incident occurred Jan. 20 in a Rockford, Illinois, Alpine Bank, after Laurence Turner, 31, barged in wearing a mask and carrying a semiautomatic pistol. Cops say Turner, who had THC and opiates in his system, was suspected in armed robberies late last year on two other banks and a jewelry stop. Alpine Bank would be his last adventure.

The videos show that as soon as Turner stepped in the bank door, employees went diving for cover. He fired a shot into the ceiling, perhaps an attempt at intimidation. He did not see Harrison, the white-shirted Metro Security guard and recently retired Winnebago sheriff’s deputy, reach for the pistol on his right hip and put one shot immediately in Turner’s center of mass.

Harrison won the ensuing brief firefight easily. By the time it was done, the aspiring robber was expiring in the doorway, shot twice in Harrison’s organized fusillade.

“There is no doubt in my mind the actions of Brian Harrison saved the lives of those that were employees in the Alpine Bank location on that date and saved his own life,” Winnebago County State's Attorney Joe Bruscato said last week in a press conference that unveiled the video and announced Harrison would face no charges in connection with the incident.

Harrison, who was placed on administrative leave pending investigation of the incident, is expected to be guarding the bank again this week. That’s Alpine Bank, where your deposits are safe — just please let Brian see your hands as you come in.