Winchester Will Supply Ammo For The Army’s New Service Pistol

On Feb. 28, Winchester announced that it has been selected as the ammunition supplier for the U.S. Army Modular Handgun... 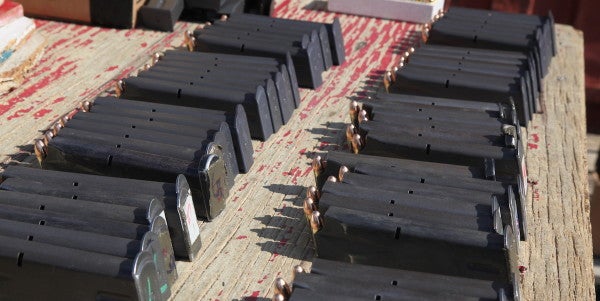 On Feb. 28, Winchester announced that it has been selected as the ammunition supplier for the U.S. Army Modular Handgun System program. Winchester Ammunition's President Brett Flaugher said in a statement that the award represented “…a significant opportunity for Winchester to continue its steadfast support of the U.S. military, just as we have for decades.”

While the Department of Defense has not made an official contract announcement about Winchester’s involvement in the Modular Handgun System program, sources at U.S. Army Materiel Command confirmed to Task & Purpose that there would be no separate award announced. Winchester partnered with Sig Sauer, whose P320 handgun was selected to replace the M9 as the Army’s service pistol in January, during the Modular Handgun System trials.

As part of the contract, bidders were required to include special-purpose ammunition of their choosing in their proposals, Army officials told Military.com in 2015. Exactly how much of the $580 million award will go toward ammunition is not yet known.

Winchester, based in Illinois, will provide both standard full metal jacket ball ammunition and “special purpose” ammunition — specifically jacketed hollow-point ammunition, which would significantly increase the lethality of the service pistol. In July 2015, the Army relaxed its policy toward restricting the military's use of hollow-point ammunition, opening the door for the government to purchase the ammo under the Modular Handgun System. As Christian Beekman has previously written for Task & Purpose:

The legal argument against the use of hollow-points stems from Article IV, Section 3 of the 1899 Hague Convention, which specifically prohibits “the use of bullets which expand or flatten easily in the human body, such as bullets with a hard envelope which does not entirely cover the core, or is pierced with incisions.” Thirty-four nations to date have ratified this section of the Hague Convention; however, the U.S. only ratified the first three articles of the 1899 Hague Convention. Representatives of the U.S. never signed Article IV, and the Senate didn’t ratify any part of Article IV.

Winchester undoubtedly has the production capacity to meet the new contact and the company’s collaboration with Sig in fulfilling the Modular Handgun System contract follows up several recent large contracts for various calibers of ammunition. In February last year, Winchester won a $99.2 million contract to provide not just 9x19mm pistol ammunition but also .38 and .45 caliber ammunition to the Army, along with a $90.8 million contract awarded in January, for rifle ammunition in 5.56x45mm, 7.62x51mm and .50 BMG.

There are no details yet when the first deliveries from Winchester will made.