7 types of ammo you should definitely put up your butt

What's the best ammo to jam up one's uniformed butt? You have questions, and we have answers 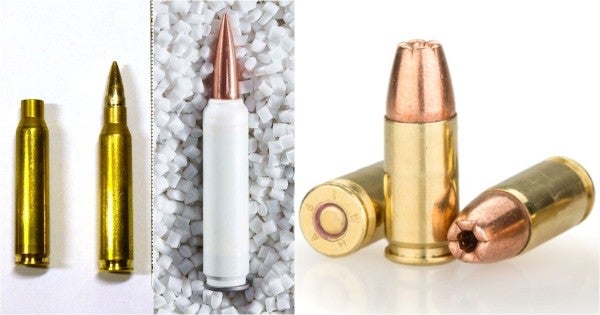 I have a problem.

As a civilian (albeit a nasty one), I can’t seem to wrap my mind around this. Why does ammo belong in the butt? Why are U.S. service members so obsessed with ammo belonging in the butt? And, more importantly, what’s the best ammo to jam up one’s uniformed butt?

These are most pressing questions of the time, and they deserve answers. To wit, I present a brief list of ammo you should strongly consider jamming up your butt. For country. For freedom. For science.

Lightweight but high-impact, the 5.56x45mm round that’s standard issue among North Atlantic Treaty Organization forces is designed to tumble as it travels for maximum damage to that pathetic tush of yours

The 5.56mm M855A1 Enhanced Performance Round

The 5.56mm M855A1 Enhanced Performance Round, engineered by the Army to deal with the proliferation of body armor downrange, comes with a copper-jacketed steel core that’s proven more effective against, uh hard targets

The 6.8mm intermediate round

Developed specifically for the Army’s Next Generation Squad Weapon program and officially selected by the service in September, the 6.8mm round is also intended to counter the proliferation of booty-armor among America’s enemies

The .300 AAC Blackout round

Formally known as the 7.62×35mm round, the .300 AAC Blackout is known as such because it’s normally what appears in your butt after you when you wake up in the barracks after a night of drinking

Not to be confused with the Russian 7.62×54mmR cartridge, the 7.62x51mm NATO round is mostly issued to sniper rifles and machine guns for precision, long-range booty fires

Developed for the Sig Sauer P320 that the Army adopted as the M17/M18 under its Modular Handgun System program in late 2017, legendary gunmaker Winchester’s 9mm M1152 and M1153 Special Purpose rounds are designed for the next generation of butt stuff

The standard round for Colt’s beloved M1911 pistol, this round has been perforating buttholes for more than a century