This is the US military’s next sniper rifle of choice

The U.S. military appears to have fallen in love with a relatively new sniper system: The Multi-Role Adaptive Design (MRAD) bolt-action sniper rifle from Barrett Firearms 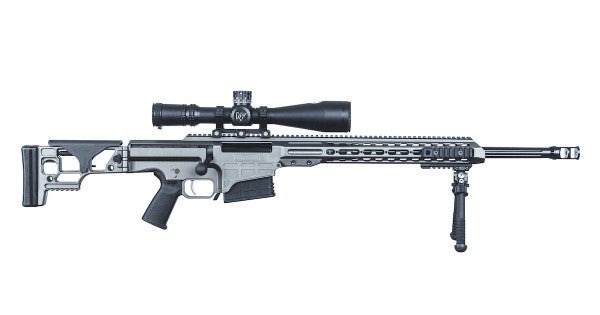 The U.S. military appears to have fallen in love with a relatively new sniper system: The Multi-Role Adaptive Design (MRAD) bolt-action sniper rifle from Barrett Firearms.

But in the last year, military planners from not just SOCOM, but the Army and Marine Corps have all made moves to add Barrett’s modular, multi-caliber new sniper system to their arsenals.

As part of their fiscal year 2021 budget requests, both the Army and Marine Corps included requests to adopt the MRAD themselves as their primary sniper systems of choice.

“The Army PSR program is adapting the rifle selected under the SOCOM ASR program,” Alton Stewart, a PEO spokesman, told Task & Purpose. “The initial rifle selected (Remington MSR, Mk21) did not conform to SOCOM requirements at the time and the program was re-competed with the Barrett MRAD (Mk22) selected as the rifle solution.”

The Marine Corps wants to purchase 250 MRAD sniper systems under SOCOM’s ASR program for roughly $4 million to “replace all current bolt-action sniper rifles” currently used by the service, according to budget justification documents (Marine Corps Systems Command did not respond to repeated requests for comment).

So why is the U.S. military falling in love with the MRAD? Both the Army and Marine Corps say the rifle offers greatly extended range and effectiveness than current sniper systems in a significantly lighter weight package. In particular, the Marine Corps in budget documents touted the MRAD’s capacity to chamber a “wider variety of special purpose ammunition than current systems” as a major selling point.

Indeed, versatility and modularity are among the chief features of the MRAD’s broad appeal. As The War Zone reported in 2019, the simple conversion method “eliminates the need for separate weapons to fire each of these rounds, offering special operations units added operational flexibility and reducing strain on the logistics and maintenance chains.”

“The MRAD’s modular ‘adaptive’ design also allows for the rapid removal of the trigger assembly for easy cleaning or replacement with another module altogether,” The War Zone notes. “This streamlines maintenance and also means that an armorer could install trigger packs with different characteristics, such as changes in the weight or length of the trigger pull, which better meet a shooter’s preferences or their mission requirements.”

Should Congress approve the services’ budget request, U.S. troops will actually get their hands on the rifle sooner rather than later: the Army in particular plans on fielding the MRAD as its PSR Mk 22 starting in the fourth quarter of fiscal year 2021.

Barrett Firearms did not respond to request for comment.