A 36-year-old jogger says tactics she had recently learned in a self-defense class helped her fight off a man who... 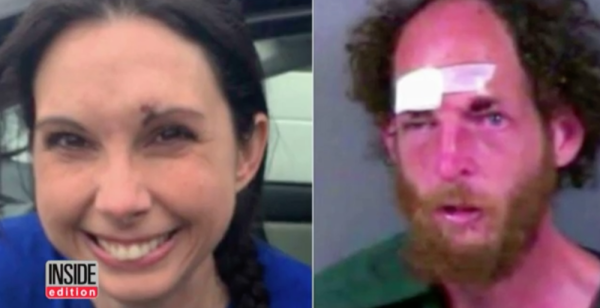 A 36-year-old jogger says tactics she had recently learned in a self-defense class helped her fight off a man who tried to rape her in a bathroom in Seattle’s Golden Gardens Park on March 5.

“All I kept screaming during the attack was, ‘Not today, motherfucker,’” Kelly Herron told Inside Edition. “I was screaming it like an animal. It was the most vicious savage part of my being. There was no way I was going to let this guy rape me.”

The only recording of the attack was captured by Herron’s GPS watch, which traced her erratic movements as she fought desperately for her life.

Herron posted the GPS map to her Instagram account alongside a photo of her bruised and bloody face. The accompanying caption began: “My biggest running nightmare became reality — 4 miles into my long run Sunday afternoon, I stopped to use the restroom and was assaulted by a man hiding in a stall (that is my GPS in red lines).”

Herron told Inside Edition that she was drying her hands in the park bathroom when she “became aware that something was wrong.” She then turned to see a man later identified by police as Gary Steiner, a 40-year-old transient and convicted sex offender. His face was covered.

Steiner lunged at Herron, threw her to the ground, and began punching her. Herron managed to crawl into one of the bathroom stalls, but Steiner followed. In the stall, Herron said, Steiner beat her in the face with his hand while repeatedly trying to flip her over onto her stomach. All the while, Herron didn’t stop fighting back.

“Time stopped. I remember what the instructor said in class, which was to hit with the side of of my hands…Hard bones in soft fleshy places,” she said. “I realized this doesn’t have to be a fair fight. I had one hand to use so I just started clawing his face and punching him in the face with the side of my my hand.”

Herron said it was a surge of adrenaline that allowed her to break out of the stall, at which point she and a stranger used a carabiner to lock Steiner in the bathroom.

Steiner, who has been arrested multiple times over the past two decades for sexual assault and indecent exposure, has been charged with attempted second-degree rape and second-degree assault with sexual motivation.

In a strange twist, after Herron’s story went viral, it was embraced by Just Want Privacy, an anti-transgender organization campaigning in Washington state to require trans people to use public restrooms for their assigned birth gender. The group posted photos of Herron’s bloodied face on their Facebook page, arguing that her case proved gender-neutral restrooms were a threat to public safety. “We cannot be naive and normalize the presence of males in females’ vulnerable spaces,” the group wrote. It also used Herron’s story in a fundraising appeal,  The Seattle Times reported.

This did not go over well with Herron. In a statement released through a state anti-discrimination nonprofit, she chastised Just Want Privacy with characteristic brashness. “To the people behind I-1552, I say, ‘Not today, motherfuckers,’” she wrote. “I refused to allow anyone to use me and my horrific sexual assault to cause harm and discrimination to others.”

Just Want Privacy has since released a statement apologizing to Herron.