Effective April 3, 2017, each military branch will expand its drug-screening procedures for applicants. That means more peeing into cups,... 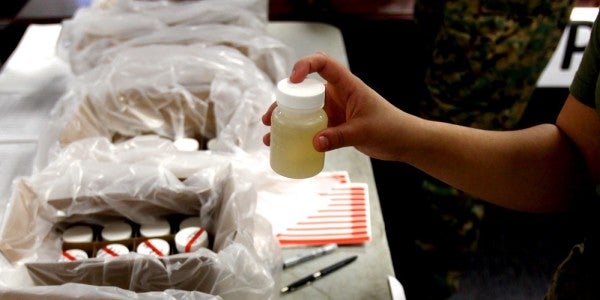 Effective April 3, 2017, each military branch will expand its drug-screening procedures for applicants. That means more peeing into cups, and probably a few more drug waivers.

Applicants are currently tested for illicit substances and prescription drug abuse while they are in the Delayed Entry Program. At the moment, the military tests for marijuana, cocaine, amphetamines, methamphetamine, and designed amphetamines like MDMA, commonly referred to as Molly or ecstasy.

The new test will screen for all of those substances, as well as heroin, codeine, morphine, hydrocodone, oxycodone, hydromorphone, oxymorphone,benzodiazepine sedative and a number of synthetic cannabinoids, like spice, according to a Department of Defense press release. So that means toking up on fake weed in your car before you walk into the recruiter’s office isn’t going to fly anymore. Plus that crap is like the Diet Coke version of weed — it’s crappy and worse for you than the real drug.

Another major change: If an applicant tests positive twice for any of the banned drugs, he or she will be permanently barred from military service. Under the new rules, applicants who test positive will be able to apply again after 90 days, if the service allows it. This is a pretty big shift from the current policy, in which reapplication requirements vary based on the type of drug.

The change is in response to “the level of illicit and prescription medication abuse among civilians, as well as the increase in heroin,” according to the DoD release.

The new standards will apply to all military applicants — from enlistees to appointees at the service academies, incoming members of ROTC, and other officer candidates.

About 279,400 applicants are processed each year; of those, roughly 2,400 test positive for drugs. With the expanded screening, the military expects an additional 450 will pop each year.

If you’re a big time pill popper, then you’re out of luck come April. For the rest of the applicants looking to serve: You’re now less likely to end up with a rackmate who’s addicted to prescription drugs and hooked on bath salts.